Evolutionists are faced with a controversy1,2 with the discovery of ‘human-like’ fossil footprints allegedly made 5.7 million years ago at Trachilos on the Mediterranean island of Crete.

Why a controversy? Because according to the evolutionary scenario at that time our human ancestors were only found in Africa, had ape-like feet but didn’t walk upright until much later in history; about 3.6 million years ago.3

The footprints were found in 2002 by the study’s lead author, Gerard Gierliński.4 The two tracked surfaces were laser scanned to produce a 3D image and a silicone cast of a print was made as well. Various measurements were also taken. The researchers concluded the tracks were made by a ‘hominin’ and noted that the trackmaker “lacked claws, and was bipedal, plantigrade, pentadactyl and strongly entaxonic”.1

For the layman, that means that the prints were more likely to have been made by human feet than any other creature.

The researchers concluded the tracks were made by a ‘hominin’ …

That’s an important distinction because the human foot shows amazing design among its 26 bones, such as the ability to absorb shock, and to flex at the mid foot and push off.5

And as one of the authors said:

“Human feet have a very distinctive shape, different from all other land animals. The combination of a long sole, five short forward-pointing toes without claws, and a hallux (‘big toe’) that is larger than the other toes, is unique.”6

Fossil tracks provide information about the presence of a trackmaker at a moment in space and time. Inferring a trackmaker from a trackway is only possible where there is sufficient and distinct morphological data to make the link between trace and culprit.1

In other words, the observer can deduce with a fair degree of certainty from the imprint left behind what type of creature made it. It would be fair to suggest that most people would immediately conclude the prints were made by a human just by looking at an image of them.

Despite the conclusion that the tracks are most likely human, the authors go on to warn:

The phrase “the implications run counter to conventional views on human evolution” is a key point to consider because the researchers know any suggestion that challenges accepted ‘fact’ is viewed with suspicion—at the very least.

As one of the study participants observed:

“Whether the human origins research community will accept fossil footprints as conclusive evidence of the presence of hominins in the Miocene of Crete remains to be seen.”2

For biblical creationists there is no surprise about finding fossil footprints—human or otherwise—because we know that all creatures came into being (perfectly formed) at God’s command in Creation Week, just as we are told in Genesis. So, unlike evolutionists, creationists don’t have a problem with accepting that human-like footprints were indeed made by a human.

When we encounter fossils like this, we use the true history of the world that we read about in the Bible to interpret them. This tells us—among many other things—of a cataclysmic worldwide Flood that is the best explanation for the countless fossils found in multiple locations all over our planet.

So, unlike evolutionists, creationists don’t have a problem with accepting that human-like footprints were indeed made by a human.

The discovery of footprints is highly significant because footprints mean the person was alive at the time. They could not have been made by pre-Flood humans after the waters of the global Flood peaked because only the people on the Ark survived. Because the prints in Crete were found in sediments deposited very late in the geological record, they had to have been made after the Flood. The person who made them would have been descended from the eight individuals who survived the deluge on board the Ark.

Thus, because the Bible is the true history of the world, we can know for certain that, like humans, all creatures are descendants of their original parents and only reproduce after their kind (Genesis 1). So whoever left behind those prints on Crete was a descendant of Adam and Eve, and of Noah and his wife; just like all of us. 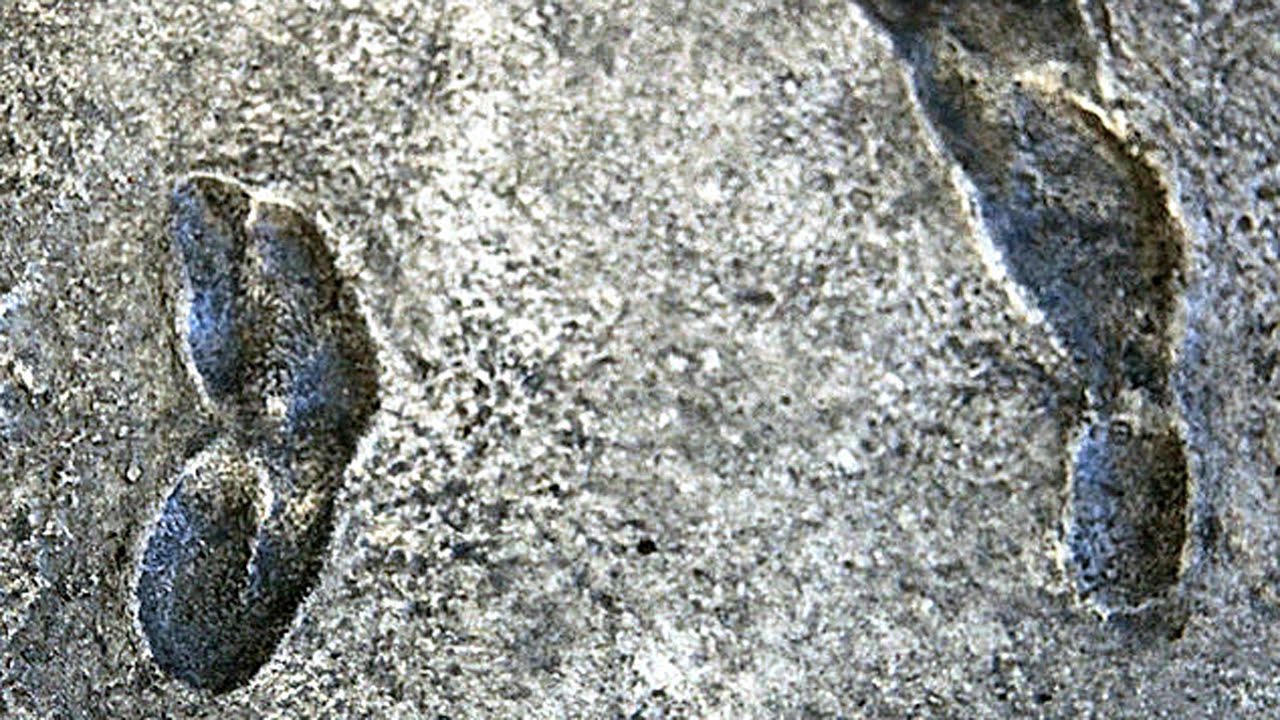 The True Story of the World
by Russell Grigg
US $12.00
Hard Cover