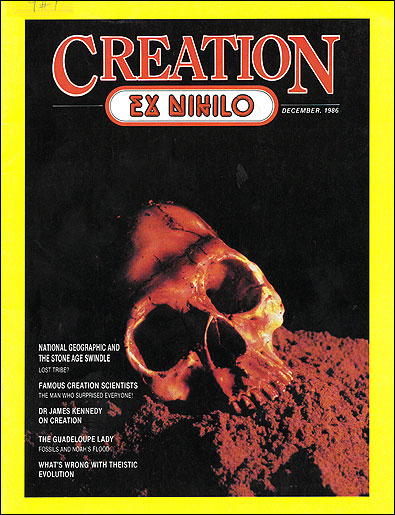 Creation and the appearance of age

We measure the passage of time by making use of the running down of the clock or by applying the rate of radioactive decay to measurement. Both methods are coupled to entropy1 increase. But what would the rules on entropy have been during the act of creation? Let us take an example to visualise this state of affairs:

In the beginning God is reported as having taken the ‘dust of the earth’ and as having formed Adam from it.2 He then breathed the breath of life into him and Adam became a living soul. The Bible does not report Adam as having arisen as a newborn babe.

According to the scriptural record, no parents were there to take care of him. So he must have been adult at his creation and have possessed immediately his five senses in a full state of development so as to have been able to fend for himself from the start.

This example makes it clear that where creation is concerned the laws of thermodynamics (entropy), as we know them, are turned upside down.

Let us now consider some consequences of the creative act. Adam is standing there in all the beauty of new creation, straight from the Creator’s hand.

Shall we say, for the sake of argument, that he is just two breaths, or some five seconds, old? His lungs have just filled themselves with the pure air of Eden.

But how old does Adam look, judging his age by our time-measuring experience? He is adult, perhaps handsome, mature. It takes, according to our way of reckoning time, some 20 to 30 years to allow a man to come to maturity, and Adam is obviously a mature man. Accordingly, we would guess Adam’s age to be some 20 to 30 years. But in reality, we know he is just two breaths, or about five seconds, old.

This example makes it clear that where creation is concerned the laws of thermodynamics (entropy), as we know them, are turned upside down. Here the laws governing time do not function either. Adam is just five seconds old and yet looks as though he were 20 to 30 years old. What is more, at every act of creation there must be the same appearance of age.

Dr Karl Barth, the famous Swiss theologian and founder of neo-orthodoxy, maintains a similar idea of creation in his well-known saying that when God created, he created with a past.3 There must be this built-in illusion of the passage of time. This must be the case, for our concept of entropy—and thus of the passage of time—cannot be valid during any creative act.

This must also be the case with respect to the creation of the cosmos and the earth. Hence too, an act of creation must bring with it an appearance of age, and this appearance lies in the very nature of creation ex nihilo. That this illusion is a built-in one may be seen from the following example:

If a mixture of lead and uranium in a rock was created at the beginning, it would automatically give an appearance of age. For we know that certain isotopes of lead arise as the end stage during the radioactive decay of uranium. By measuring the amount of lead in uranium ore we can determine the rock’s age. Since it takes X years to form so many milligrams of lead from a given amount of uranium, by measuring the amount of lead in the rock we can determine the rock’s age, for this decay rate remains constant. But after an act of creation in which a rock is made containing, for example, five grams of lead and five grams of uranium, later calculations must go awry for the following reasons: the five grams of lead will automatically produce the appearance of having been derived from the uranium over millions of years. But it was actually not derived, but created de novo. In reality the mixture of lead and uranium has been created as such, but after creation it cannot avoid producing the appearance that it is millions of years old.

An act of creation lies so much outside our present-day knowledge that we do not really know how to calculate to take it truly into account, even though all physics demands an active creation to explain the very being and order of life, atoms and of the subatomic world of particles, waves and orbits. For this basic reason of an act of creation at the back of the cosmos, it is on principle impossible to arrive at an absolutely definitive and meaningful date for creation. Science demands an act of creation as an explanation of being, but this act of creation must produce an appearance of age and time. We must remember too, in addition to all this, that before matter and space existed, no time existed either. So, to be scientifically sound, we must be very cautious in matters concerning time in general and dating in particular.

Thus, if God created a tree, it would have rings in it the moment it was created. That is, creation of the tree would bring with it the built-in appearance of age, where no age, in fact, existed. [Ed. note: this is wrong—see God created with functional maturity, not ‘appearance of age’.]