A most interesting essay by one of the last of the church fathers, titled ‘On Dragons and Ghosts’, was very recently translated for the first time (into Russian) and published in Moscow.1

Like many ancient manuscripts, it refers to dragons, creatures which often resemble known dinosaur types or features, as real living creatures. Like most people who have been taught that dinosaurs died out millions of years before people appeared, Maxim Kozlov, the Russian Orthodox priest who produced the translation and commentary, does not accept that people actually encountered dragons/dinosaurs. Despite this, however, he praises the author of the essay for his ‘soberness of mind … in striking contrast to … boundless mysticism and search for the mysterious.’

In fact, John of Damascus was an author of great intellect, a stranger to any gullibility or fable-telling. Moreover, the whole purpose of the essay is the exposure of various fables and superstitions.

For instance, John wrote: ‘Some people claim that dragons can both take the human form and turn into serpents, sometimes small, sometimes huge, differing in body length and size. And sometimes … having turned into people, they start to associate with them, appear to steal women and consort with them.’ To refute such ideas, he went on: ‘So we would ask [those who tell such stories]—how many intelligent beings did God create? And if they do not know the answer, we will respond: two—I mean angels and humans … but if a dragon were to change its form … becoming at one moment a serpent, at another a man … it clearly follows that dragons are intelligent beings greatly exceeding men, which has never been true, and never will be.’2

John admonishes those who make such claims about dragons, namely that we should ‘trust the teaching of Moses, and, more exactly, the Holy Spirit, having spoken through [Moses]. [This teaching] reads: “And God brought them to Adam to see what he would call them; and whatever [Adam] called every living creature, that was its name (cf. Gen. 2:19).” Hence, a dragon was one of the animals.’ 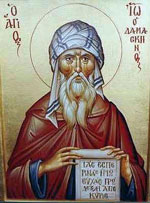 John of Damascus (St John Damascene, Johannes Damascenus) was an Arab monk, liturgical composer and renowned theologian of the Eastern (Greek) Christian church in the 8th century (c. 675–749). A doctor of both the Latin and Greek churches, he was a leading intermediary between the two church cultures. His book Fount of Knowledge earned him the title ‘the father of scholasticism’. An eminent preacher, he was known as ‘The Golden Orator’. He was also the most prominent defender of icons (religious images) in what became known as the great iconoclastic (image-destroying) controversy

John of Damascus goes on to say, ‘I am not telling you, after all, that there are no dragons; dragons exist but they are serpents [reptiles] borne of other serpents. When just born and young, they are small; but when they grow up and mature, they become big and fat so that they exceed the other serpents in length and size. It is said they grow up more than thirty cubits [14 metres, 45 feet]; as for their thickness, they become as thick as a huge log.’

The Damascene patriarch appears to have been a reliable witness who, in addition, possessed much of the scientific knowledge of his time. A significant portion of his classical book An Exact Exposition of the Orthodox Faith is devoted to purely scientific data.

The science of those times was descriptive by nature. It did not penetrate into the essence of things but generally recorded natural phenomena reasonably accurately. A report by such a well-educated scholar of that period should be carefully considered.

The essay continues: ‘Dio the Roman [aka Cassius Dio, AD 155–236], who wrote the history of the Roman empire and republic, reports the following: One day, when Regulus, a Roman consul [3rd C. BC], was fighting against Carthage, a dragon suddenly crept up and settled behind the wall of the Roman army. The Romans killed it by order of Regulus, skinned it and sent the hide to the Roman senate. When the dragon’s hide, as Dio says, was measured by order of the senate, it happened to be, amazingly, one hundred and twenty feet long, and the thickness was fitting to the length.’

John of Damascus is clearly describing the existence of real dragons, contrasting them with the fictional nonsense that was attributed to them. He writes further about another kind of dragon. These were given various mythical characteristics, such as the absence of a face. He says that in reality, ‘This dragon is a type of beast, like the rest of the animals, for it has a goat-like beard, and a horn at the back of its head. Its eyes are large and gold-coloured. These dragons can be either big or small. All serpent kinds are venomous, except dragons, for they do not emit poison.’

Thus, the main purpose of the ancient author was to persuade his readers that dragons were real living creatures, and not mythical beings like ghosts, werewolves, faceless bogey-creatures and so on. Dragons, he wrote, were absolutely real animals, though sometimes big and terrifying, which at that time were only rarely seen by humans.

When we look at accounts of dragons in history, the similarity of many of them to various types of dinosaurs is apparent. Some dinosaurs are well known to have had bony protrusions and horns on their head, and some had spikes on their back and/or tail, as is commonly seen in depictions of dragons. (Since their soft tissue is not generally preserved as a fossil, we do not know what sort of protruberance under the jaw may have given rise to the common description of some dragons as having a ‘beard’. Some dinosaurs may have had a structure similar to that of the lizard known as the ‘bearded dragon’.)

But as time went on and these creatures became ever rarer, fables sprang up about them, and mythical features were added to the accounts.

But as time went on and these creatures became ever rarer, fables sprang up about them, and mythical features were added to the accounts. It was to counter these that John of Damascus wrote. He turns from the language of fables to the language of science: dragons are not hobgoblins, but animals! To confirm this, he describes their birth and development, size and behaviour, and refers to the act of catching a dragon and measuring its hide. It seems unlikely that either John the Damascene, or Dio the Roman, would have tried to support a fabrication with reference to a Roman consul and the senate.

‘The tale is also told,’ John of Damascus continues, ‘that dragons can be driven away by thunder … and [so] get killed. When I heard this I laughed!’ He describes the effect of thunder and lightning, and points out that lightning can kill both people and animals. Perhaps some dragons were also killed this way; which is why such a legend could appear, he suggests.

The author’s tone here and elsewhere shows quite clearly that he is glad to expose and, moreover, ridicule any fable or hoax. He would not take the UFO/alien stories of today seriously, for example. But in this text John of Damascus does not deny the fact of dragons’ existence. To the unprejudiced, his writings are one more piece of evidence for the co-existence of people and dinosaurs, not millions of years ago, but during the biblical timeframe of history.

‘We harm ourselves most of all,’ the essay concludes, ‘when we ignore reading of the Holy Scriptures and studying them according to the Word of our Lord.’ If only more scientists would listen to these words … 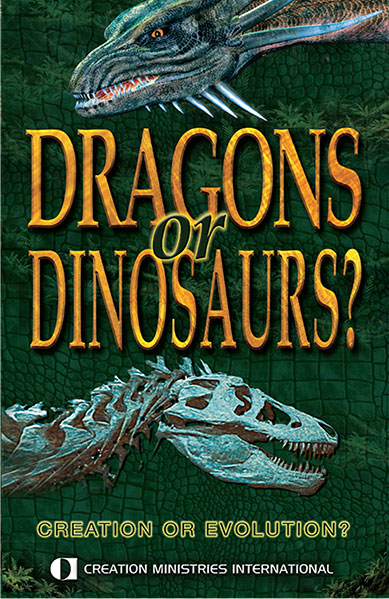