The ‘face’ on Mars

While photographing potential landing sites for future manned missions to Mars, on 1 July 1976, NASA’s Viking 1 revealed some unusual features on the Martian surface. One structure which was roughly 1.9 km x 2.6 km (1.2 x 1.6 miles) looked like a human-like face complete with headdress (see figure 1). Suddenly, newspapers all over the world were proclaiming ‘The Face on Mars.’

In this same region of Mars, called Cydonia, other structures that resembled pyramids were seen. The images became a sensation, and very quickly thoughts turned to what type of aliens built them, and where they might have come from!

NASA tried to calm speculation that advanced alien civilizations created the structures. But as I have discovered over many years of research into the UFO phenomenon, the true believers never let the facts get in the way of a good story. NASA’s attempted quashing only increased the conspiratorial notions that ‘true believers’ in the UFO movement already thought they ‘knew’—namely, that governments cover up the truth about UFOs and alien visitations.

The idea that a long-lost Martian civilization built the structures was propagated mainly by Richard C. Hoagland, a self-promoting ‘science advisor’, who even assisted respected TV newsman Walter Cronkite during the Apollo mission broadcasts.

NASA’s attempted quashing only increased the conspiratorial notions that ‘true believers’ in the UFO movement already thought they ‘knew’—namely, that governments cover up the truth about UFOs and alien visitations.

The 1980s saw the UFO phenomenon explode. The book The Roswell Incident had taken root in popular culture with its false claims that an alien spacecraft crash-landed in New Mexico in 1947, and that the government hid wreckage and alien bodies retrieved from the site.1

In 1987 Hoagland released his book The Monuments of Mars: A City on the Edge of Forever, dubbing this area of Cydonia, ‘The City Square’. Controversy sells, and Hoagland’s claims became very popular. He went even further by claiming that intelligent races once existed on our own moon and also on the moons of Jupiter and Saturn. For years, famous UFO believers such as Erich Von Däniken in his best-selling book Chariots of the Gods (1968) had claimed that older, more advanced aliens had built the pyramids of Egypt and other structures. Now that ‘pyramid structures’ were seen on Mars, it seemed to add weight to claims about ancient extraterrestrials leaving their calling cards in our solar system. This also added weight to a theory of our origins known as ‘directed panspermia’2 in which primordial life on Earth was deliberately seeded by aliens, and evolution did the rest.

So what were these structures?

These rampant speculations were primarily based on two massive suppositions.

Were NASA’s denials a coverup?

Despite the abundance of conspiracy theories, it should be remembered that space agencies like NASA would love nothing more than to find evidence of alien races. In recent years they have struggled for relevance and funding, and they know of the huge public interest in the possibility of extraterrestrial life. NASA’s long-running Origins program, which helped funding immensely, was created to search for life in space, and led to the modern field of astrobiology.3 Finding ETs would be a huge boon for NASA.

However, more detailed photos of Cydonia by NASA’s 1998 Mars Global Surveyor expedition poured cold water on the ET claims about the ‘Face’. They revealed that the ‘face’ and ‘pyramids’ were no more than naturally eroded landforms (see figure 2). With the light at a certain angle the illusion of a face seemed to be present. But these pictures from a different angle showed little in the way of the sorts of design features that anyone could claim were purposeful.

Mars appears to have been, and may still be, geologically active. There are mountains and volcanoes, including the enormous Olympus Mons—the tallest volcano in the solar system.4 There are also networks of channels and canyons that suggest water once flowed in abundance there.5 The ‘Face’ and pyramids are nothing more than the remnants of such geologic activity.

And now, from another source, there is more evidence to debunk the ‘Face’ claims. Not long ago, the space probe Mars Express of the European Space Agency (ESA) sent back the highest resolution photos ever taken of Cydonia. Gerhard Neukum, principal investigator for the Mars Express camera, says he received hundreds of e-mails asking for new pictures. ‘Some of them even said, “NASA is lying, we want the truth”.’ He says the conspiracy theorists went quiet after the release of the image shown (figure 3).6

The belief that ‘more evolved’ advanced aliens exist, who will return someday to solve our petty squabbles, fix ozone holes and solve global warming, etc. is not supported by any credible evidence. It has unquestionably become a new religion. Tragically, people are looking for meaning, purpose and hope of a new future in all the wrong places. They choose to ignore (2 Peter 3:5) the abundant evidence of the Creator God of the Bible—the Creator whose truth would indeed set them free and give them a sure and certain hope (John 8:32). 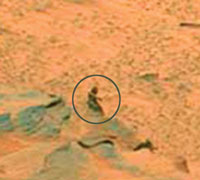 A little man on Mars?

In January this year, the media again promoted unwarranted speculation about intelligent life on Mars. The NASA rover Spirit returned a photo of what appeared to be a ‘person’ sitting down and pointing. NASA ridiculed the claims, saying it was only a few yards from the camera and the rock no more than a few inches high. Astronomer Phil Plait of the Bad Astronomy website said, ‘If the image really is of a man on Mars, he’s awfully small. Talk about a tempest in a teacup! It’s just our natural tendency to see familiar shapes in random objects.’