Huxley, morality and the Bible

English biologist Thomas H. Huxley (1825–1895), also known as ‘Darwin’s bulldog’, was the most prominent humanist and aggressive advocate of evolution of his day.1 On reading the Origin of Species he wrote to Charles Darwin:2

“I finished your book yesterday. … And as to the curs which will bark & yelp—you must recollect that some of your friends at any rate are endowed with an amount of combativeness which (though you have often & justly rebuked it) may stand you in good stead.

“I am sharpening up my claws & beak in readiness.”3

When the great mass of the English people declare that they want to have the children in the elementary schools taught the bible, … I do not see what reason there is for opposing that wish.

Henceforth, in public lectures, debates, reviews of the Origin and numerous essays, Huxley vigorously promoted the doctrine of evolution, despite the fact that he disagreed with Darwin on the tempo of evolution (Huxley favoured sudden or drastic changes, sometimes called ‘saltation’ or ‘jumps’, which Darwin abhorred), and Huxley was not wholly convinced that natural selection was the mechanism.4

He is probably best known for his 1860 ‘debate’ with Bishop Samuel Wilberforce.5 In his 1863 book Evidence as to Man’s Place in Nature, Huxley anticipated Darwin’s Descent of Man (1871) by asserting that humans and apes had evolved from a recent common ancestor.

In 1869, he coined the term ‘agnostic’ (from Greek a = not, gnosis = knowledge) to describe himself and his position that he did not know whether God existed or not. Nevertheless, his lifelong opposition to almost all forms of organized religion led Communist leader Lenin to perceptively observe that “in Huxley’s case … agnosticism serves as a fig-leaf for materialism”.6 By ‘materialism’, Lenin meant the philosophy that the material was all there was, i.e. no supernatural, in short, atheism.

Bible teaching for his own children!

One of Huxley’s major interests was what subjects should be taught in school. Surprisingly, in view of his hostility to Christian theology, he advocated that all children, including his own, should be taught the Bible. In an 1870 essay he wrote:

“But my belief is, that no human being, and no society composed of human beings, ever did, or ever will, come to much, unless their conduct was governed by the love of some ethical ideal. … And if I were compelled to choose for one of my own children, between a school in which real religious instruction is given, and one without it, I should prefer the former, even though the child might have to take a good deal of theology with it.

“Hence, when the great mass of the English people declare that they want to have the children in the elementary schools taught the Bible, … I do not see what reason there is for opposing that wish. Certainly, I, individually, could with no shadow of consistency oppose the teaching of the children of other people to do that which my own children are taught to do.”7

Benefits without the Benefactor

Huxley faced a dilemma—the same one which the evolutionary establishment faces today. On the one hand, in lectures up and down the land, Huxley taught people that they were evolved animals. But, lest they behave like animals as the natural consequence of such teaching, he wanted all children to acquire the elements of Christian morality. His solution: teach the Bible in schools, without theology, i.e. whatever you do don’t teach that we were created by God and so are answerable to Him.

On the one hand, in lectures up and down the land Huxley taught people that they were evolved animals, but lest they behave like animals as the natural consequence of such teaching, he wanted all children to acquire the elements of Christian morality.

When I grew up, it was common practice for parents to send their children to Sunday school, likewise to acquire a dose of Christian morality. Today, society is much more steeped in evolutionary dogmatism than it was in Huxley’s day. As a consequence, our society has proportionately lost its endorsement of Christian values, replacing them with moral relativism—i.e. there is no such thing as absolute right and wrong. This is not really surprising—a society that does not believe that God exists is not likely to hold that God is the ultimate source of our common morality, and that morality is, therefore, as absolute as He is.

However, Huxley wanted to eat his cake and have it too, i.e. counteract what the Bible says about God as Creator by teaching evolution, but retain some of the Bible’s ‘benefits’. He applauded:

“ … the great historical fact that, for three centuries,8 this book has been woven into the life of all that is best and noblest in English history; … that it is written in the noblest and purest English, and abounds in exquisite beauties of mere literary form; and, finally, that it forbids the veriest hind who never left his village to be ignorant of the existence of other countries and other civilizations, and of a great past, stretching back to the furthest limits of the oldest nations in the world.”7

Huxley concluded his support for Bible reading by recalling his own experience as a boy:

“I know that some of the pleasantest recollections of my childhood are connected with the voluntary study of an ancient Bible belonging to my grandmother. … What come vividly back on my mind are remembrances of my delight in the histories of Joseph and of David; and of my keen appreciation of the chivalrous kindness of Abraham in his dealing with Lot. … And I see, as in a cloud, pictures of the grand phantasmagoria [i.e. the great imagery] of the Book of Revelation.

“I enumerate, as they issue, the childish impressions which come crowding out of the pigeon-holes of my brain, in which they have lain almost undisturbed for forty years. I prize them as an evidence that a child of five or six years old, left to his own devices, may be deeply interested in the Bible and draw sound moral nourishment from it.”7

How could Huxley have been so familiar with the Bible, yet so blind to its real message, namely that man has rebelled against God but, through the death and resurrection of the Lord Jesus Christ, God has done what is necessary for man to be reconciled with God?

“The improver of natural knowledge absolutely refuses to acknowledge authority, as such. For him, scepticism is the highest of duties, blind faith the one unpardonable sin. … The man of science has learned to believe in justification, not by faith, but by verification.”9

Huxley rejected the authority of God as his Creator and Judge. And, despite his sneer at faith as a sin, he based his whole life, as well as his future in Eternity, on his own faith in a theory of origins for which there is no empirical verification. He failed to understand that he was interpreting his claimed scientific evidence through the filter of his own worldview. As a result, his mind was blinded to spiritual reality (2 Corinthians 4:4).

He also equivocated, i.e. played bait-and-switch with word meanings, e.g. ‘justification’. In Paul’s writings, this word means a legal declaration of righteousness. This is the result of imputation, or crediting to our account, Christ’s perfect righteousness (2 Corinthians 5:21), and imputing our sin to Christ on the Cross (Isaiah 53:6).

Conversely, the Bible tells us “test everything; hold fast what is good” (1 Thess. 5:21). In Scripture, faith is not contrary to reason but to sight.

Huxley vs theologians who did not believe the Bible10

Huxley was well aware of the theological importance of Genesis to the truth of the gospel, even though he himself did not accept it. He therefore despised compromising churchmen who did not believe what the Bible said, and wrote:

“I am fairly at a loss to comprehend how any one, for a moment can doubt that Christian theology must stand or fall with the historical trustworthiness of the Jewish Scriptures.”11

Concerning theologians who said the Flood was not world-wide, he wrote: “A child may see the folly of it.”11 And he continued:

“I venture to ask what sort of value, as an illustration of God’s methods of dealing with sin, has an account of an event that never happened? If no Flood swept the careless people away, how is the warning of more worth than the cry of ‘Wolf’ where there is no wolf?”11

Post-script: There are millions today in the same predicament as Huxley. In this ministry we are often made aware of instances where the ‘lights go on’ and people come to saving faith in Christ as their evolutionary objections are broken down. This happens as, by God’s grace, He chooses to use creation materials and information, like this magazine, which believers have shared with their friends, colleagues and family members. 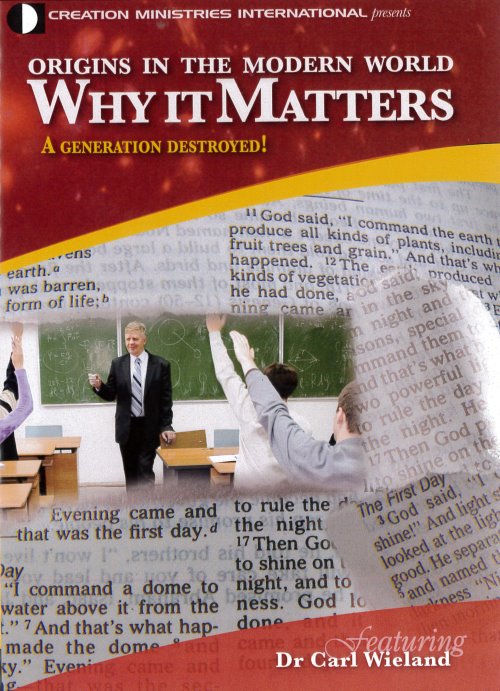