Islam and worldview: the big picture

Some 20 years before 9/11,2 one had to be fairly astute to identify radical Islam, not communism, as the major threat to Christianity.

We reminded Darrell Furgason that he made that identification to one of us (CW) in the early 1980s. He replied, ‘When communism, with its materialistic, evolutionary basis, was exposed as an “evil empire” that produced death—some 170 million dead—I already knew something bigger was coming. Islam was in the wings, backed by 14 centuries of its history. The church had not even started to engage this worldview, or woken up to what was coming.’

Darrell had lived and studied for some years in the world’s largest Muslim country (Indonesia). He explained how he saw the 35 million Christians there progressively losing the battle to resist ‘Islamization’. He blames this squarely on the lack of a robust Christian worldview.

‘If you’re not learning a biblical worldview, you’re learning another one, be it humanist, Marxist, Islamic, or whatever. And that will affect your whole life, how you live your life. Why would all those 9/11 pilots flying those planes happen to be Muslim? Clearly, another worldview was involved. Christians need to understand what they’re up against.’ Darrell Furgason, April 2006.

‘In places like Africa and Indonesia’, he explained, ‘the church has been intellectually crippled, with one hand tied behind its back. Western missionaries generally brought the Gospel in the way they learned it, as a purely soul-saving faith, with no real bearing on anything else—religion was a mostly personal matter, nothing to do with things like politics, science, law, economics …. African people were given the Gospel, but not how to build a righteous nation, how to apply Christianity to everything, as [evangelical philosopher] Francis Schaeffer talked about. We taught them what to believe, but not what to do with it. Around about them, the political/philosophical realities were against them; Muslims see their faith as all-encompassing, and now Islam (e.g. in Nigeria and other places) is burning churches and butchering Christians.’

Exposing the dangers of this ‘dualism’, as he called it, is a major passion for Darrell. ‘Most Western Christians see the world like this, too’, he says, ‘divided into the “sacred” (things like faith, morality, salvation) and the “secular”—everything else, the real world.’

In the work of Creation Ministries International (CMI), we see the consequences of such ‘dualism’ all the time. In many ways, Christians have retreated from the ‘science’ battlefront in the belief that Christianity is only supposed to be about faith, morality, salvation, and so on—what Schaeffer called the ‘upper story’ of thought. So the world gets the impression that Christianity is not ‘truly true’, but is only about things ‘inside your head’—the subjective realm.

Darrell strongly agrees with CMI’s concern that the church has largely surrendered absolute truth and the authority of Scripture, and knows that the Genesis creation account, which he holds to absolutely, is a major battlefront. He says, ‘Many Christians believe that since science talks about facts, which are morally neutral, and Christianity talks about values, they need to keep the two separate.’ (We see this continually—they often don’t understand that origins science, in particular, is about much more than facts, it involves interpreting those facts in a particular framework. See creation.com/noma and creation.com/presupp.)

Darrell went on: ‘So many Christians are basically adopting a pagan philosophy to interpret facts, and then they find that the “facts” they are being taught (about anthropology, geology, biology, etc.) undermine the very basis for their Christianity—the historicity of the first Adam, the fall into sin, and so on. This then causes further retreat, till there is very little that is recognizable about the Gospel in their thinking—even in the “value” area! So we left the social and cultural agenda to the atheists and humanists, who are now, in turn, “giving away the store” to Islam in the name of a philosophy that implies that all views are equal. But that’s not what Muslims themselves believe. Today, there are Islamic study centres on many Australian campuses, but only one Christian one is left.’

‘Creation ministry’, says Darrell, ‘helps establish the Bible’s credibility in the minds of Christians, which is crucial—an assurance that the Bible is not a fool’s book, which makes them open to being taught on the applicability of the Bible in politics, economics, law, etc. Give away Genesis 1–11 and what is there left in the Bible?’

One alternative for many evangelicals has been to simply retreat from even engaging objective truth, into a form of mysticism. Darrell says, ‘This has perfectly suited the postmodernist, who says, “All truths are relative—my truth is as good as your truth.” The church is trying to accommodate itself to feel accepted—as though acceptance validates the church, when historically the opposite is true.’

The burgeoning creation and ‘intelligent design’ movements are just some of the hopeful signs Darrell sees of Christianity regaining intellectual ground compared to the 1980s when, he says, many in the church abandoned absolutes in many areas.

‘More and more Christians, of all eschatological views, realize that it’s time to bring godliness into the public sphere. We can know for sure from the Bible that we are commanded to let godliness increase, and to disciple the nations. And we know intuitively what is righteous and godly; we know, for instance, that freedom is better than slavery, health is better than disease, justice is better than injustice, and so on—these things are universal, for everybody. Christians building a hospital in Pakistan is good, regardless. I have a passion to see the good things that flow from a Christian worldview “bless the nations”’.

Darrell Furgason became a Christian as a 22-year-old in 1975, as an atheist backpacking in Australia who reached a point of personal despair. He heard the Gospel through YWAM (Youth With a Mission) work. ‘My heart was converted first’, says Darrell, ‘and my mind had to follow later. For instance, I had just accepted evolution as taught. I had no answers; when I went to university for my first degree in philosophy, I was handing out Gospel tracts, but I was completely unprepared for the onslaught of tough intellectual questions from those with a well-developed antibiblical worldview, including my atheist professors. Basically, I was torn to shreds intellectually—my heart was still with God, but my mind in effect reverted to atheism.’ But, says Darrell, he had some solid teaching and influences in those formative years,3 including our own ministry, ‘when Carl spoke at a YWAM school in Canberra I was running.’

As a new believer, I was about to go to university, and a Christian asked me, ‘Why? If you think too much, you will lose your faith.’ But if Christianity collapses if you just think about it, why would you believe it? We are to love God with all of our mind, too (Mark 12:30).

In 1989, he went back to university to do another more advanced philosophy degree. Only this time, he says, ‘I wasn’t fearful of being converted; I wanted to find out more about “the enemy”—antibiblical worldviews’.

During his master’s degree in International Studies (political science), he increasingly came to realize that he could apply a biblical perspective to every issue, including international matters, since ‘all truth comes from God’. His thesis for that degree was on Islamic resurgence and political activism in the ’80s and ’90s. He said, ‘What these activists are doing today precisely follows the patterns I saw then—pushing for Sharia law and Islamic states everywhere.’

For his 2002 Ph.D., Darrell spent 5–6 years studying Muslim students in Australia, to see if they were becoming less Islamic and more secular after studying at secular Australian universities. The answer: they became, on average, more Islamic. All of them thought that Islam was the answer, and that the West was doomed. One summed it up to him as, ‘Islam is the best, forget the West’. This contrasts dramatically with Christian students, he said, who overwhelmingly become less Christian at secular universities.

‘Christian students are far more vulnerable’, he says, ‘because they already have that fallacious fact/value dualism. Biblical truths are relegated to that “value” area. The Christian students think that they need to accept all these other “facts” they are learning from their professors. Whereas Muslims simply compare what they are taught on a subject, such as feminism, with their Islamic books on that subject, and they have a way to analyze and reject it since they have a worldview in the intellectual realm, and have not left that to the secularists as we have.

‘The more we recover a Christian worldview, an understanding of the Bible as relevant to everything, the more we and our children can stand against the onslaughts of Humanism and Islam sweeping across the world.’ 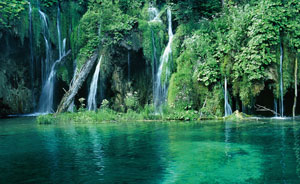 ‘Environmentalism, as opposed to proper biblical stewardship [Genesis 1:26–28], makes the environment the one absolute, infusing it with moral values—it really moves into a political and ideological/religious sphere.

‘And it tends to involve a hatred for humans as the “enemy” of the environment. The scientific claims are driven by shoddy philosophy. The Bible presupposes development, not stagnant environmentalism where people worship paganism’s sacred grove.

‘Of course, then there’s the question of how to develop, how much development, what are the motives, who will it harm, and so on. As in everything, biblical principles need to be foremost in how we think about the environment.’

Creation Evangelism in an Islam-Aware World
US $10.00
DVD
The Creation Answers Book
by Various
US $15.00
Soft Cover