At schools and universities, students are taught that jellyfish are ‘primitive’ creatures way down the evolutionary ‘tree’. Unlike ‘more advanced’ marine creatures such as fish, jellyfish do not appear to be powerful swimmers. Lacking a backbone, their pumping action is slow and their forward movement often barely perceptible.

But is that a fair assessment?

Two recent studies of what jellyfish1 can do put things in a completely different light.

Unlocking the ‘secrets’ of jellyfish pumps

Medical researchers say jellyfish have just what they’re looking for.2

“Most pumps are made of rigid materials,” says California Institute of Technology researcher Janna Nawroth. “For medical pumps inside the human body, we need flexible pumps because they move fluids in a much gentler way that does not destroy tissues and cells.”

According to Nawroth and her co-researchers, jellyfish undulations “hold secrets” that may make possible vastly improved miniature pumps for medical applications and soft robotics. They have carefully studied the flows and eddies created by the pumping action of jellyfish, particularly a characteristic measure known as the Reynolds Number.3

“We’re very lucky,” said Nawroth. “The Reynolds numbers we see in the movement of jellyfish of different sizes and ages are in the right range as what we need for medical applications.”

There have been other insights too. For example, at a micro scale, jellyfish exploit the narrow layer of water adhering to their surface as they move—i.e., they “use it as [an] additional paddle at no extra cost.” What’s more, there is “a clever arrangement” of multiple pacemakers within the jellyfish body which fine-tune the pumping mechanism.

The researchers plan to use this new-found “practical understanding” of jellyfish movement to help design a range of flexible pumps for medical applications.

How comb jellyfish sneak up on prey

But copepod plankton are renowned for their sensitivity to predator movements in the water, and their rapid escape response. Just how comb jellyfish can catch the predator-wary copepods has presented something of a puzzle, as the University of Gothenburg’s Lars Johan Hansson explains:

“Copepods have a well-developed ability to detect even the slightest water disturbance. They can swim well clear of the source of water deformation in just a split second.”4

So how can the comb jellyfish so successfully make itself “hydrodynamically invisible” to its prey?

Hansson and his co-researchers used advanced video technology to study the water deformation generated by jellyfish movements compared to the water disturbance needed to trigger the copepod’s escape response.5 They found that the comb jellyfish uses microscopic hairlike cilia inside its oral lobes to produce the gentlest of currents, transporting water between the lobes.

“As the water accelerates slowly and is transported undisturbed into the jellyfish together with the prey, there is nothing that alarms the prey until it is next to the capture site inside the lobes, by which time it’s too late to escape,” explained Hansson.4

Making a right judgment about jellyfish

“Despite its primitive structure, the North American comb jellyfish can sneak up on its prey like a high-tech stealth submarine, making it a successful predator.”4

But to claim something is both “high-tech” and yet ‘primitive’ is surely illogical. The only basis for labelling the jellyfish as ‘primitive’ is the evolutionary story about its origins—one that time and again doesn’t mesh with reality. We’ve seen how medical pump designers recognize the clever arrangement and design in jellyfish pumping mechanisms and that such design is worth copying.

Design does not come about by accident, it needs a Designer—and the Bible tells us who that is.6 It’s the One who will come again (Hebrews 9:28) to judge the living and the dead (1 Peter 4:5). He is also the One who sent a watery judgment upon the whole earth—which is why we find beautifully preserved jellyfish fossils. (Darwin was wrong about that, too—see below.) 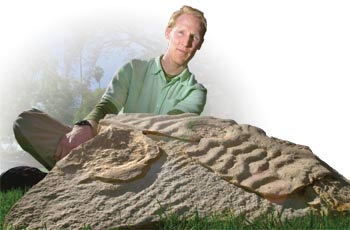 Jellyfish fossils would have been a colossal surprise to Charles Darwin, who, in trying to explain the lack of intermediate fossils, wrote in Origin of Species (1859):

“No organism wholly soft can be preserved.”7

“When people find a T-rex, that doesn’t excite me that much, because a T-rex has bones and teeth—really easy to fossilize. But to preserve a jellyfish, that’s hard, because it has no hard parts. Something is there we don’t understand.”8

From an evolutionary perspective, Darwin’s and Hagadorn’s comments are understandable. But jellyfish fossilization speaks not of the slow-and-gradual processes mooted by evolutionary theory, but of rapid burial. And that, coupled with the worldwide distribution of fossils, is consistent with their having been buried in the global Flood of Noah’s day, around 4,500 years ago.9