A clever hunter for a creature with no brain

What has no heart, bones, eyes or brain, is made up of 95% water, and yet is still a remarkably efficient ocean predator?

The answer is the jellyfish.1

This unusual creature is not actually a fish, but an invertebrate from the Coelenterate phylum (the same phylum as coral, also called Cnidaria). It comprises a ‘bell’, made up of a jelly-like substance, as well as tentacles and oral arms (sometimes called ‘flaps’), which are used to eat its prey. The bell is called a medusa, because it resembles the Gorgon Medusa of Greek mythology, with its hair of writhing snakes.

‘Bodies the size of washing machines’—Japanese fishermen, after trapping 1,000 jellyfish in one net.

There are more than 200 species of jellyfish (of the class Cubozoa), ranging in size from the tiny thimble jellyfish of the Caribbean to the Arctic lion’s mane, which has a bell up to 2.5 m (8 ft) in diameter, and tentacles up to ~60 m (~200 ft) long—twice the length of a blue whale—and is thought to weigh more than 250 kg (550 lb).2 Swarms of Nomura’s jellyfish, with individuals weighing as much as 150 kg (330 lb), recently clogged fishermen’s nets in the Sea of Japan—in some cases fishermen have even reported 1,000 or more jellyfish with ‘bodies the size of washing machines’ being trapped in one net! 3, 4

There are two ways in which jellyfish move through the water. Some swim, using jet propulsion, and some attach themselves by a stalk to other material, such as seaweed. Both types are referred to as zooplankton (animal drifters), because their movement is strongly influenced by the ocean’s current. Even jellyfish capable of jet propulsion are not strong enough swimmers to counter the power of the current and waves.

Jet propulsion in jellyfish is possible because of special muscles called coronal muscles, embedded on the underside of the bell, which push water out of the hollow bell. As water is pushed in one direction, the jellyfish moves in the opposite direction.

Without a brain or eyes, jellyfish rely on nerve cells to help them move and react to food or danger. Sensing organs tell them whether they are heading up or down, into the light or away from it.

They remain balanced in the water with help from special sacs, located on the bell rim. When a jellyfish shifts too far to one side or the other, the sacs stimulate nerve endings to contract muscles that reorient the jellyfish in the correct direction (working similarly to the sacs in the inner ears of humans).

Although they look harmless, jellyfish are remarkably efficient predators, able to stun and kill their prey with stinging cells (nematocysts). Each cell contains a tiny harpoon which, when triggered by touch or movement, shoots into the prey and delivers a debilitating toxin. (Coral species also use nematocysts to stun and kill prey; see Creation 25(1):31.)

In the open sea, there’s nowhere to hide.

The potency of this toxin varies among jellyfish, causing reactions in humans ranging from mild rashes to death. Some, like the sea nettle, are simply an annoyance to those who are stung, while others, like the box jellyfish (see A ‘God of love’ created a killer jellyfish?) are very dangerous and sometimes cause death.

Of course, jellyfish don’t set out to hurt humans—their preferred food ranges from microscopic animals and fish larvae to other jellyfish. Usually people are stung when jellyfish are carried close to shore, where swimmers inadvertently brush against them.

Floating along in the water, jellyfish can be both predator and prey. Because most jellyfish are almost transparent, they are able to camouflage themselves quite well against their watery background, which is important because, while they can use jet propulsion to move about in the water, they are also at the mercy of the current, and in the open sea, there is nowhere to hide. 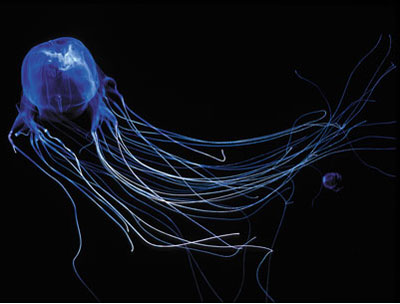 The box jellyfish (sea wasp) is pale blue / transparent and has a cube-shaped bell, up to 20 cm (8 in) long with as many as 15 tentacles each as much as 3 m (10 ft) long. They are found in warmer waters around the world, though not usually over coral reefs. The Indo-Pacific species is considered the most venomous marine animal known. Pain from a sting is excruciating; shock, respiratory arrest and death can follow within as little as 2–3 minutes.
Gary Bell © oceanwideimages.com 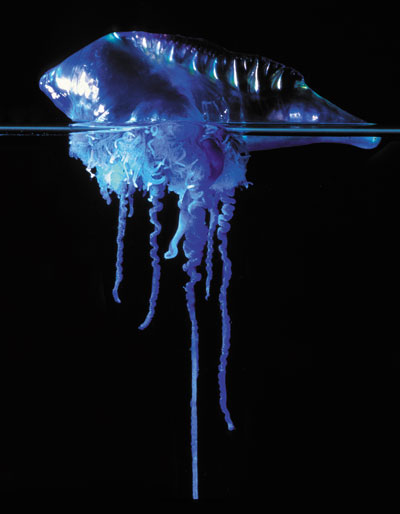 The Portuguese man-o’war, known in Australia as the bluebottle because of its bluish transparent ‘bubble’, has stinging cells capable of killing small fish. In humans, stings can result in extreme localized pain (and respiratory distress in children or the elderly). Usually found washed ashore on beaches after rough weather, they can reach 30 cm (12 in) in size, with tentacles up to 10 m (33 ft) long, although they are commonly much smaller.

The early life cycle of the jellyfish is similar to, though not identical to, coral. Larvae are carried through the water until they find a hard surface onto which to attach, such as a rock or shell. These then develop into polyps, which, at this stage, resemble sea anemones.

Horizontal grooves then begin to form and deepen until the polyp is transformed into a stack of individuals, like a stack of pancakes. These flattened polyps break off the stack, one by one, and swim away, now starting to look more like adult jellyfish.

Jellyfish have a short lifespan, the longest surviving species living only two to six months, usually perishing in rough waters or being eaten by predators—ocean sunfish and leatherback turtles are two of the most prevalent jellyfish predators. (Researchers do not know how turtles and other predators can eat poisonous nematocysts without harming themselves.5,6)

Jellyfish are incredibly fragile, yet also incredibly complex. They ‘breathe’ through the entire surface of their bodies, which is able to absorb oxygen and release carbon dioxide, and, even after death, are able to continue to deliver poison from their stingers if the tentacles remain moist.

Given the complexity of the jellyfish’s anatomy and hunting techniques, it’s hard to imagine how ‘developmental’ species could have survived while a non-jellyfish was evolving into a ‘modern’ jellyfish.

Each of the jellyfish’s special features—from the sacs that keep it swimming upright to the sensory organs that alert it to passing prey and the nematocysts, critical for stunning or killing that prey—is vital for its survival. So, logically, any phase that did not have these features fully developed would have led to extinction fairly quickly. The only alternative, then, is that jellyfish have always been jellyfish.

There are other marine creatures referred to as jellyfish, though they are not ‘true jellies’. One is the Portuguese man o’ war (right), which looks similar to a jellyfish.

There are also comb jellies—these look and act like jellyfish, but are not ‘true jellies’, because they have no stinging cells.7

Jellyfish inhabit oceans around the world, mostly in coastal waters, although there are some amazing deep sea dwellers that generate spectacular light shows through bioluminescence.8 Some jellyfish live in fresh water rivers and lakes.9

There is little chance of a person surviving the sting of a box jellyfish … victims can go into shock and drown before reaching shore.

This marine creature measures up to 20 cm along each side of its cubed bell (hence the name ‘box’), and has as many as 15 tentacles on each ‘corner’, which can be 3 m (10 ft) in length. Each of these tentacles can have as many as 5,000 stinging cells.

There is little chance of a person surviving the venomous sting of the box jellyfish, unless they are treated immediately. The pain is so excruciating and overwhelming that victims can go into shock and drown before reaching the shore.10

In contrast, the sting of the Irukandji jellyfish is not usually very painful initially. But within half an hour or so of being stung, victims start to have severe backache or headache, along with nausea and shooting pains in their muscles, chest and abdomen—with ensuing complications proving fatal in some instances. No definitive treatment (antivenin) is currently available for Irukandji stings.11

Made in Heaven
by Ray Comfort and Jeffrey Seto
US $10.00
Hard Cover
Events near Ashburn