Just after sunrise, a visitor to the Kalahari desert is certain to spot one of southern Africa’s most endearing celebrities—the meerkats. Scrutinizing the savannah scrublands, the keen observer is likely to see a dozen or more of these smallish animals with long, slender bodies. They ‘sit’ (or stand) upright on their hind legs, using their tail like the third leg of a tripod. Their unmistakeable upright stance, sitting together peering over the surrounding landscape, has become an African icon.

The patient sightseer’s curiosity is sure to be rewarded by the sight of the warmed-up clan’s brief morning play time. They wrestle and groom one another before taking off in search of a juicy insect for breakfast.

As the gang disappears in the distance, the onlooker might have a final glimpse of another charming sight of the African wildlife scene. This time, it is several meerkat sentries taking turns to stop and briefly sit upright, ready to warn the rest of the clan of aerial and other predators.

‘Meerkat’ seems to be of French derivation, borrowed from the Dutch, likely referring to a ‘lake cat’. However, meerkats are neither in the cat family, nor are they attracted to lakes.2

The meerkat (Suricata suricatta) is classified in the suborder Feliformea (‘cat-like’ meat eaters) and family Herpestidae (mongoose-like animals). There are three known subspecies, all indigenous to southern Africa. While evolutionists claim the first feliforms appeared in the middle Eocene (‘dated’ at about 42 mya), a ‘common ancestor’ of this particular group has not been found in the fossil record.

Meerkats have a number of design features which help them to overcome challenges in a fallen world.

With the discovery of a type of extinct meerkat (Suricata suricatta major), the prevailing view is that these creatures evolved from the banded mongoose at the southern tip of Africa.

With Genesis an accurate historical account, it is likely that today’s meerkats, like some other species in the same biblical kind, are indeed descended from an original mongoose-like kind created on Day Six of Creation Week around 6,000 years ago.3

Taking the Bible at face value, a male and female of this particular kind boarded Noah’s Ark around 4,500 years ago.4 At the end of the global Flood, they disembarked with all other air-breathing vertebrate land-dwellers. Dispersing over time,5 they reached the newly formed African continent.

Living in a harsh and hostile environment, and active mostly during the day, meerkats have a number of design features6 which help them to overcome challenges in a fallen world.

Meerkats are sociable creatures. They live together in a network of underground tunnels dug in hard, dry soil. For this, they have sharply curved non-retractable claws with which they dig their burrows. They can move their own weight in dirt in a few seconds, also while searching for food.

Meerkats recognise members of their own kind not only by scent and sight, but also voice. Until recently, this had not been known for certain.

While performing this task, they have the ability to close their ears with ‘ridges’ on the ear lobes. This prevents the dust and debris from clogging up the ear canals. They also have a sheath-like structure between the eye and eye lid called the nictitating membrane. While the meerkat is digging, it acts as a ‘windshield wiper’, removing sand from the eyes with every blink.

Meerkats have seriously sharp teeth. Before the Fall, the representatives of their kind ate green plants, tubers and fruit (see Gen 1:29–30). Between the Fall and the Flood, their diet also came to include eggs, insects, spiders, scorpions,7 small rodents, lizards, even small snakes.8 From these food sources, they obtain all their nutrition and most of the moisture needed to survive in a harsh, dry environment. Their very high rate of metabolism means their daily search for food is very important, for they can lose up to 5% of their body weight overnight.

The lifespan of meerkats is around 13 years. When young males reach sexual maturity, they are banned from the clan to start a new group with evicted females. This ensures the overall survival of their species in a fallen world.

If you are scared of snakes and scorpions, meerkats aren’t. For them, some of these poisonous creatures are favourite food delicacies—particularly scorpions. Having descended from mongoose-like animals, some meerkats seem to handle the bites of certain venomous snakes reasonably well. However, biologists have not yet established for certain whether meerkats are protected against snake venom in general.9 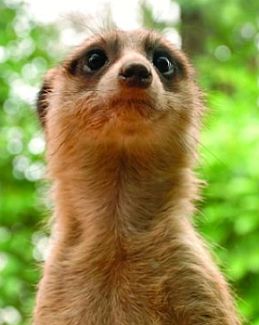 Though irresistible and cute, meerkats make rather poor pets, even when house-trained from very young. Depending on where you live, having one in your home might even be against the law. They can be quite aggressive at times, especially towards outsiders whom they might bite when handled.

In several localities in southern Africa, meerkats can be observed in their natural habitat, which seems a much better idea.2 In other countries, one can always visit a zoo to learn more about their lifestyle in captivity.3

Despite oft-repeated claims, meerkats are not immune to the venom of scorpions either (see footnote 9). It would be more correct to view this as a learned behaviour with survival value in a fallen world. In brief, the adult meerkats teach their pups in stages how to handle a scorpion without being stung. With proper training, the young meerkat will eventually be able to seize a live scorpion. It quickly bites off and discards the stinger, then brushes off in the sand any poison remaining on the outer surface of the scorpion, before the juicy meal is gobbled down. Rather ingenious—though the scorpion might have another opinion …

Like many other animals, meerkats recognise members of their own kind not only by scent and sight, but also voice. Until recently, this had not been known for certain.10 Ironically, evolutionary biologists now claim that the discovery of vocal communication skills in non-primate social mammals such as meerkats, suggests that humans are not so unique among mammals after all.

With naturalism the prevailing worldview of evolutionists,11 this notion is no surprise to biblical creationists. Paraded as science, the uninformed public would not always realize that an evolutionary idea such as this is rooted in naturalistic religion, not in solid science. And of course animal vocal communication, while fascinating and sophisticated, is not at all like human use of language.12

Kool kats of the Kalahari

Meerkats have excellent vision. The black rings around their relatively small eyes do more than just suggest the appearance of ‘sunglasses’; by absorbing light that would otherwise be reflected, they have an ‘antiglare’ function. This helps them to spot a predatory bird overhead, even with the sun directly above.

The silvery-brown colouration of meerkats’ fur has camouflage value, helping them to blend in with their arid surroundings. The fur insulates the body and thus acts to either keep the heat in or keep the body cool.

Meerkats also have in-built ‘solar panels’? Well, not quite, but they do have a nifty patch of darker skin under the thinner fur of their tummies. Heat flows more readily into (and out of) dull black surfaces, so this warms them up in the morning. Later in the day, while lying face down in the shade, it helps them cool off as their body heat flows into the cooler sand.

Is design just an illusion?

Meerkats, like all living things, have many remarkable design features, some of which have been mentioned above. Despite overwhelming evidence, some insist these only “give the appearance of having been designed for a purpose.”13 Evolutionists believe that all design features evolved by chance random processes over long periods of time. For them, the key driving force would be the two main ‘engines’ of evolution—natural selection and random genetic mutations.

These mechanisms do operate in nature, and minor fine-tuning of existing genetic information can arise as a result.14 For example, it is conceivable that something simple, like the distribution of fur colour, could be modified by natural selection acting on the normal variation. But a growing body of solid scientific evidence suggests that they are inadequate to drive molecules-to-man evolution, even over immense periods of time.15

Beyond the colouration of the fur, for instance, the issue is how complex fur-growing and colouring machinery and biochemicals arose in the first place.

Of course, to acknowledge deliberate design for anything means there is a Designer.16 Such a Being would have to be infinitely more powerful and intelligent than us. Since He created us, He owns us and sets the rules, and we are personally accountable to Him. The Bible speaks plainly about the tendency of fallible fallen man to refuse to be answerable to a Creator-God—see Romans 1. So the widespread rejection of the creation explanation for design, despite the evidence all around us, is no surprise.

The meerkats’ remarkable way of life gives us a glimpse into God’s on-going care for a fallen creation (Romans 8:19–22, Job 38:39–41). Jesus assured us that God is aware of every sparrow that falls to the ground. Having been created in His image (Genesis 1:27), we are of more value than many sparrows (Luke 12:6–7).

God surely knows of the many challenges we face from day to day (Matthew 6:32). If we put our faith and trust only in Him for our salvation, He has promised to keep us always (Matthew 28:20). What a wonderful Creator and Saviour!17 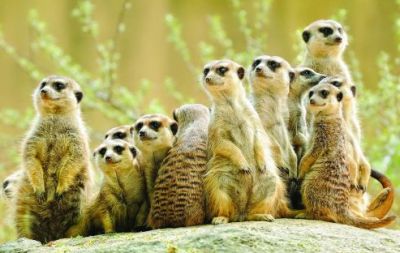 Altruism is a caring behaviour found among ‘helpful animals’.1 It is fairly widespread in nature.2 While evolutionists have conjured up various ideas to try and explain how this evolved, they mostly remain implausible.3 In contrast, a wise and benevolent Creator who continues to care for His fallen creation, makes much more sense. This behaviour is also evident in the meerkat clan: