Life of a Universe: Part 1: Creation

More big bangs for your buck

On January 2, 2018, the Australian Broadcasting Corporation TV Channel 2 re-ran their program titled “Brian Cox: Life of a Universe: Creation”. This actually involved two episodes originally shown as “Part 1: Creation” on March 7, 2017 and “Part 2: End of Days” on March 14 2017. We present our response to “Part 1: Creation” below, and we will show our response to “Part 2: End of Days” tomorrow.

English physicist and well-known media ‘star’ Prof. Brian Cox has been on tour in Australia, discussing two fundamental questions: How did the universe begin? and How will it end? He presented his answer to the first question on the Australian Broadcasting Corporation’s TV Channel 2 program Life of a Universe: Part 1 Creation, on 7 March 2017. Here is our response to this first program.

What is the big bang?

Cox begins by telling viewers that “every culture you study across the world has a creation story” and he then proceeds to discuss the 21st century atheistic story called the big bang. He answers the question “What is the big bang?” as follows.

“In 1927, the astronomer Edwin Hubble noticed that the light from distant galaxies is stretched. This means that space is expanding, our universe is expanding. So, you run time backwards in your mind’s eye, and that means that in the past, the distances between the galaxies was smaller; you can imagine a time when the distances were so small that everything is effectively on top of each other. That implies that our universe had a beginning, there was a day without a yesterday, and that is what we call the big bang.”

Cox may be giving us this euphemistic explanation of the big bang because he realizes that scientifically it is the most non-scientific argument ever propounded. Namely that all the matter and energy contained in the billions of stars in each of the hundreds of billions of galaxies was once contained in a singularity of zero dimensions and infinite mass, which expanded at many times the speed of light, by means of a quantum fluctuation, before there was any time or any place for anything to quantum fluctuate in, and all without producing hundreds of billions of galaxies of necessary antimatter. (See In the beginning God created—or was it a quantum fluctuation?.)

Inflation is a postulate to try to solve many intractable problems with the big bang hypothesis, but one for which there is absolutely no experimental basis or even a deducible mechanism.

For an in-depth discussion of the meaning of Hubble’s observation see:

Cosmic microwave background—evidence or not?

In this program, Cox offers only one piece of evidence for the big bang—the cosmic microwave background radiation (CMB), which he described as “a faint glow coming literally from everywhere in the sky, but not being emitted from any particular star, galaxy or object … photons that have travelled 13.8 billion years”.

Then: “The cosmic background radiation is considered such strong evidence in large part because the big bang theory predicted that it should exist. It was first observed in the mid-1960s, and it was only then really that the idea that the universe began at a hot, dense origin really took hold.” (For a history of the development of the big bang theory see The mind of God and the big bang.)

He is presumably referring to the work of radio astronomers Arno Penzias and Robert Wilson who, in 1965, detected a signal that came from everywhere in the sky at the uniform intensity of 2.726 K (degrees above absolute zero). However, this was not the first such discovery, as claimed. In 1940–41, astrophysicist and spectroscopist Andrew McKellar had already found a 2.3 K background temperature to space (see Nobel Peace prize for alleged big bang proof).

In fact, the CMB fails as an argument for the big bang because, if the big bang were true, the light from the fireball should cast shadows in the foreground of all galaxy clusters, but only if it is really true that the radiation is coming from so far away. But the needed shadows are missing.

Problems for the big bang universe to have had a beginning

No doubt surprisingly for some viewers, Cox tells us: “The idea that the universe had a beginning in the big bang is in some ways unsatisfactory. It raises a series of childlike questions”, which he then lists.

“If the universe had a beginning, then what happened before the beginning?”1

“If time emerged at the big bang, then was there a time before time?”

“How can the universe appear spontaneously out of nothing at all?”

He then adds two more problems that he apparently considers a little more erudite than these, known as the horizon problem and the flatness problem.

This is the fact that light has not had enough time to travel from a point on one extreme edge of an expanding universe to a point on the diametrically opposite extreme edge. Nevertheless the temperature (i.e. the CMB) is the same (to one part in 100,000) for both points, as well as being the same in all directions of our universe.

Cox says: “But these two points on the sky are separated today by 90 billion light-years. That means if you’ve got a universe that’s been expanding sedately and is only 13.8 billion years old, those two points could never have been in contact with each other, which means there’s no explanation for how they could be so precisely the same.”

He makes an analogy with the little piece of the earth he’s standing on. “[It] looks flat, even though we know the Earth is curved, because it’s very small compared to the size of the Earth.” Applying this ‘logic’ to the universe, he says that the two pieces of the sky that are so far away from each other “were once in contact with each other. They could jiggle around and get to the same temperature, but then they were ripped apart.”

Many viewers would not realize that what is being suggested—inflation—is a postulate to try to solve many intractable problems with the big bang hypothesis; but one for which there is absolutely no experimental basis or even a deducible mechanism. The proposal is that the universe expanded rapidly at many times the speed of light. And then just as suddenly this super-expansion came to a screeching halt—also for no known reason. If proponents of Genesis creation were to seek to solve a scientific conundrum in a similar way, inventing new scientific laws and processes, secularists would definitely cry foul at such a proposition. They would be justified in labelling it a convenient miracle invented for the sake of solving the problems of one’s model.3

Before! How could that be?

Returning to Cox, he then delivers his punchline: “If we are right about inflation, then this rapid expansion must have occurred before the thing we used to call ‘the big bang’.” This leads to a discussion on the need for a mechanism, which theoretical physicist Prof. Brian Greene (Physics & Mathematics, Columbia Uni) is enlisted to supply.

Greene tells viewers: “If you have an energy that is uniformly spread out through a region of space, it can yield a new kind of gravity, repulsive gravity—gravity that doesn’t pull things together, but pushes things apart.” He goes on to say: “This kind of fuel, if you would, called the inflation field, it’s like a fuel that generates this repulsive gravity, is what drove the universe to start expanding in the first place.”

“The theory that the universe has existed forever is in serious difficulty with the Second Law of Thermodynamics.” (Stephen Hawking)

Viewers may well wonder what the purpose of all this is, until Cox says: “A more speculative addition to the theory exists, and it opens the doors to an intriguing possibility—ours may not be the only universe.” Cox then poses two questions:

“How long was inflation going on for before the big bang?”

“Could it have been going on for an indefinite period of time? Could you push the origin of the universe back and back and back into the infinite past, so we have an eternal universe?”

This is followed by another conundrum for viewers, when Cox says: “There are other possibilities” and Brian Greene elaborates: “The other possibilities suggest that we are one of a grand collection of universes—we are part of a multiverse. … You have this repulsive gravity coming from the inflation field … it’s such an efficient process that you can virtually never fully use up the fuel that generated our expansion, so our big bang happens but there is some fuel left over. What does it do? It can generate another big bang, so you get this wonderful process of big bang after big bang after big bang, yielding universe after universe, after universe.”

Not so according to Stephen Hawking and the 2nd Law!

No less a big-bang promoter than Stephen Hawking disagrees with this theory because it is contrary to a scientific law to which there are no exceptions. He says: “If your theory disagrees with the Second Law of Thermodynamics, it is in bad trouble. In fact, the theory that the universe has existed forever is in serious difficulty with the Second Law of Thermodynamics. The Second Law states that disorder always increases with time. Like the argument about human progress, it indicates that there must have been a beginning. Otherwise, the universe would be in a state of complete disorder by now, and everything would be at the same temperature.”4

The big bang is the current secular alternative to creation by God. The latter is objected to so strongly by some that they reject even a beginning to the universe. This means that they have to concoct alternative theories such as those in this TV program, no matter how unscientific, illogical, or intellectually unsatisfying these may be. There is, in fact no better explanation for the universe than the one which God has given us in Genesis, that He created all things by His Word. 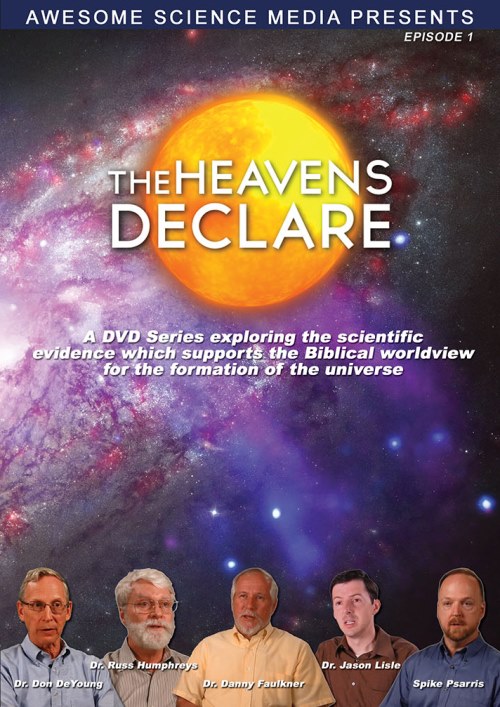