It is generally assumed that continental ice sheets erode the substrate that lies beneath them.1 If the Antarctic and Greenland Ice Sheets are millions of years old they should show evidence of abundant erosion from the movement of ice. When the base of an ice sheet or glacier becomes ‘cold-based’ (i.e. frozen to its bed), very little erosion takes place. But when the ice sheet thickens enough to exceed the pressure-melting point, or when geothermal heating or melting causes the ice to break free, basal slip occurs, causing subglacial erosion.

According to uniformitarians, the Antarctic Ice Sheet first developed 34 Ma ago, but they acknowledge it could have developed as early as the Late Cretaceous, about 70 Ma ago.2 They claim the Antarctic Ice Sheet did not reach a steady-state equilibrium until about 14 Ma ago. For some of that time, we can assume the ice sheet would have been thick enough to reach the pressure-melting point. There should be abundant evidence of erosion during these warm-based episodes from basal slip, plucking, and even meltwater flow.

… there is little evidence to suggest massive erosion has occurred beneath these ice sheets.

Temperatures are believed to have been much warmer in the Arctic throughout almost all the Cenozoic, even the Pliocene. Ellesmere Island was 11–16°C warmer4 while the rest of the Canadian High Arctic was 19°C warmer in the Pliocene.5 New proxy estimates continue to raise the temperature difference between the Pliocene and today.6 The sea level is believed to have been 35 m higher than it is today7 with sea surface temperatures in the Arctic Ocean 6–10°C warmer.8 Such warm conditions during development of the Greenland Ice Sheet would have resulted in great erosion. Even today, 75% of the Greenland Ice Sheet is warm-based.1

Assuming uniformitarian science’s ages are accurate, the amount of erosion in the substrate should have been tremendous—corresponding to the millions of years during and after the ice sheets reached equilibrium. However, there is little evidence to suggest massive erosion has occurred beneath these ice sheets.

A recent airborne radar survey, completed in early 2009, penetrated through the ice and showed isochronal ice layers, likely caused by volcanic acids, and the basal topography beneath the ice. The remote-sensing data revealed a jagged mountain landscape with sharp peaks and high relief, similar to the Alps.2 The relief averages 2.25 km but is up to 4 km along the edges of the mountain chain. One peak reaches up to within 350 m of the surface of the ice sheet.10

To try and solve this conundrum, they suggest that after the formation of the total depth of the ice sheet, the Gamburtsev Mountains became cold-based, although today it is warm-based and has meltwater, and would have been in equilibrium for the past 14 Ma. However, during the formation of the ice sheet over millions of years before 14 Ma ago, the ice sheet would have likely been warm-based. Moreover, the present conditions under thick ice contradict their explanation of it being cold-based for millions of years after reaching its maximum thickness.

Now, greater erosion would certainly be expected near the coast because of fast-moving ice and ice streams. However, even in coastal locations the erosion is mostly focused in linear troughs, similar to fjords, while large tracts of the landscape retain their pre-glacial, slightly dissected erosion surfaces.11,12

The radar also showed a ‘fluvial’ landscape, only partially modified by glaciation. In other words, the valleys and the drainage system were sculpted by water or meltwater and the ice movement had only played a minor role in forming the subglacial terrain. There are many cirques (figure 1) high in the mountains indicating alpine glaciation began at high altitudes and progressed into the valleys. A cirque is a steep-walled, half-bowl-shaped hollow high on the side of a mountain. The height of these cirques is commonly over 2 km above sea level.13 This elevation measurement takes into account the isostatic adjustment caused by the weight of the ice sheet lowering the elevation of the cirques. This type of alpine glaciation implies the initial conditions of mountain glaciation would have resulted in warm lowlands and coastal temperatures. “We found maximum, minimum and average coastal temperatures of 27.8°C, 16.3°C, and 21.6°C… .”14 These numbers were projected downward from 2.4 km by assuming cirque temperatures at about 4°C during the start of glaciation and using a standard lapse rate for high latitudes. Lapse rate is the lowering of temperature as the altitude increases. The centre of the developing Antarctic Ice Sheet should have been warm-based for millions of years within the uniformitarian framework and substantial glacial erosion should have occurred.

The centre of the Greenland Ice Sheet also eroded little

Radar images from under the centre of the Greenland Ice Sheet3 also exposed the landscape under the ice. The 10Be isotope was used to analyze the ‘soil’ within the basal 13 m of the GISP2 ice core, drilled 3,054 m down from the top of the ice sheet.3 The ice core data showed the soil was millions of years old according to the rate of radiometric decay.3 They concluded the base of the Greenland Ice Sheet was non-erosional and cold-based for at least the past 2.7 Ma.3 Uniformitarian glaciologists therefore concluded the centre of the ice sheet never melted during the numerous interglacials of the Pleistocene. Knowing that presently the centre of the ice sheet is cold-based leaves an unanswerable question. How do we know the glacier was also exclusively cold-based between 38 and 2.7 Ma ago, when the Eocene to Pliocene Arctic was much warmer than today? Oxygen isotope ratios indicate there were once warmer conditions at the base of the ice sheet, at least during ‘previous interglacials’.3 From this data we can conclude that the Greenland Ice Sheet also developed rapidly, before there was much erosion from the ice sheet.

… the valleys and the drainage system were sculpted by water or meltwater and the ice movement had only played a minor role in forming the subglacial terrain.

One issue remaining is that the 10Be measurements in the soil at the base of the Greenland Ice Sheet were very high when compared to the rate of formation today. The measurements ranged from 0.61 to 3.8 × 10 8 atoms g-1. 10Be, like 14C, is formed by cosmic rays in the atmosphere and is delivered to the surface dirt by either rainfall or the fall of small particles. It accumulates today at a rate of 3.5 × 105 atoms cm-2 year-1. The high readings in the silt at the bottom of the ice sheet, assuming slow decay and uniformitarianism, imply that the substrate below the ice sheet is millions of years old. However, if the ice sheet is young, the readings imply that before glaciation the land was only about a thousand years old. This is not likely within the young-earth timescale. High concentrations of 10Be in pre-glacial sediments imply its formation rate was either very high during the Flood or very high just after the Flood before glaciation, or both. Since cosmic rays are inversely proportional to the earth’s magnetic field strength, high silt concentrations of 10Be imply there were past times of a lower magnetic field. One outcome of a global Flood is a rapidly fluctuating magnetic field which could explain differences in 10Be.15 Or it is possible the high 10Be measurements are due to an unknown cause.

More evidence for rapid glaciation is revealed by how little horizontal movement has occurred in the isochronous reflection layers16 within the ice (figure 2). Troughs in the ice line up vertically with mountain valleys. If the ice were millions of years old, the troughs and ridges in the ice would be bent over in the direction of the ice movement. Either the ice sheet has been cold-based from the beginning, which is less likely for the reasons mentioned above, or it is very young and consistent with a rapid post-Flood Ice Age. Other locations within the Antarctic Ice Sheet display this same lack of motion.17

Observations consistent with Flood geology and the post-Flood Ice Age

The new results from the Antarctic and Greenland Ice Sheets are consistent with late-Flood channelized runoff18,19 and a rapid post-Flood Ice Age.20,21 The pre-glacial ‘fluvial’ pattern in the Gamburtsev Mountains is consistent with Walker’s Dispersive or Channelized Flow Phase of the Flood.22,23 The coastal erosion surfaces are consistent with the Abative or Sheet Flow Phase of Flood runoff. The sharp peaks under the ice sheets attest to youth and not many millions of years of glaciation. Because of warm ocean temperatures right after the Flood, glaciation would have begun in the mountains of Antarctica, as well as Greenland. For a time the ocean would have remained warm, also keeping the coast and lowland temperatures relatively warm. Inland temperatures were likely much cooler, so moisture from the ocean would fall as snow in the mountains. It would take a few hundred years for the ocean to cool, mainly from evaporation.18,19 Snow and ice would have eventually covered the lowlands and coastal regions. In this scenario, both ice sheets would have formed relatively rapidly, before the substrate was substantially eroded. 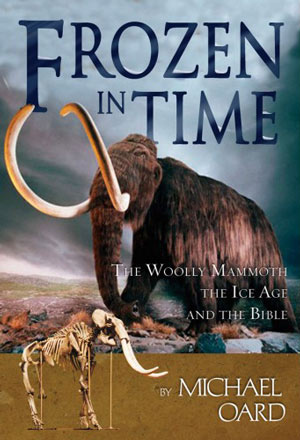