A challenge to traditional cultural anthropology

The traditional view of so-called ‘cultural evolution’ is that hunter-gatherer societies became agricultural societies, which then became industrial ones, and so on. Technology, it has long been taken for granted, always increases. When anthropologists came across a hunter-gatherer society, the standard assumption was that they had never, in their cultural past, had an agricultural society.

However, the Bible teaches that human society before the Flood already had the capacity for herding, agriculture, manufacture of musical instruments, metalworking and city-building. When we come across a hunter-gatherer society today, since these are the descendants of people who built a city at Babel, the inference is clear. Even though such hunter-gatherer societies show no sign of (for example) agriculture, they have descended from societies which did practise this.

It is therefore of great interest to creationists whenever evidence emerges that societies can in fact lose technology (such as the Tasmanian aborigines appear to have done). Also, when studies reveal that a particular hunter-gatherer society has descended from an agricultural society in relatively modern times.

One such incidence is the story of the Moriori.1 Around a thousand years ago, Polynesian farmers colonised New Zealand to become the Maori. Soon afterwards, a group of Maori colonised the Chatham islands, 800 km (500 miles) east of New Zealand. They became known as the Moriori. In 1835 Maori invaders with guns, axes and clubs invaded the Chathams, enslaving and killing most of the Moriori. The rest were largely wiped out over the succeeding few years by their Maori conquerors.

Interestingly, although they had, in common with the Maori, been an agricultural society, the Moriori had long since reverted to become hunter-gatherers. This made sense for them—the islands were too cold to grow the largely tropical Maori crops. Without being able to store surpluses of crop food, they “could not support and feed nonhunting craft specialists, armies, bureaucrats and chiefs”.2 They were therefore an intrinsically less warlike society, which made them vulnerable to the Maori attack.

The lesson thus is that hunting-gathering is not a sign of being ‘primitive’ or ‘less-evolved’ but can be a means of coping with a particular situation in which people find themselves. In turn, the types of social structures and technologies relied upon by such cultures become appropriate to that situation.

In fact, hunting-gathering can be superior to agriculture in a given environment. Thus, the Norse farmers of Greenland were replaced by the Inuit (Eskimo) hunter-gatherers:

“whose subsistence methods and technology were far superior to those of the Norse under Greenland conditions.”3

Much of the evidence related to the so-called ‘Stone Age’ can be equally well understood as people dispersed into a harsh, uninhabited world, rapidly migrating in small groups. In particular, the cave-dwellers of the great post-Flood Biblical ice age can be seen as utilising highly appropriate living conditions and technology for survival in this difficult time. 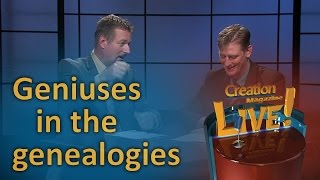