The amazing cave people of Malta

by Joseph Mizzi and Michael Matthews

There was ‘no place like home’ to the cave dwellers of Ghar il-Kbir. Foreigners were struck by their intense devotion to cave life.

“These people are so tied to their cave that when they have to go to the city of Melita either to sell their merchandise or in order to buy their needs, they feel as if they were condemned to exile and no sooner do they finish their errands, than they hurry back to their caves lest they spend even one night away.”—Kircher, 16371

“… these Maltese Troglodytes … rather chose to bury themselves, as it were, alive, by inhabiting the dark and solitary Caverns of the Earth, than to live above ground in Houses … .”—Veryard, 17012

The discovery of modern cave dwellers should not surprise us. But evolutionary ideas have brainwashed us to believe that cave dwellers are ‘primitive’. We need to remember that evidence must be interpreted—it does not speak for itself. If Christians look at cave dwellers through biblical glasses, they should realize that Noah’s descendants chose to live in caves, perhaps for convenience or personal preference, but not because they were brainless brutes!

“Do you believe in cavemen?”

Skeptics think ‘gotcha!’ when they ask this question. They might know the Bible says that Adam’s descendants built great cities, but they claim the ‘evidence’ clearly shows that early humans lived in caves.

“Of course we believe in cavemen,” we respond, “if by ‘cavemen’ you mean people who live in caves.” Just visit the town of Coober Pedy in South Australia, where opals are mined—it’s so hot that some miners live in underground houses. Real live ‘cavemen’ with TV sets!

Well, we answered the question. But the question is not really about cavemen at all. It’s about those hairy, cave-dwelling ‘apemen’ so often depicted in books and museums. People assume, based on their evolutionary beliefs, that humans who once lived in caves were primitive brutes. But this is not a deduction from the evidence; rather, it is a consequence of evolutionary conditioning. Even the caves occupied by Neandertals show clear evidence that they were skilful human beings, even talented musicians.

The Bible describes a number of ‘cavemen’. In Genesis, we find that Lot was once a ‘caveman’ (after he fled Sodom). When David was running from King Saul, he lived in a cave. Obadiah hid a hundred prophets in a cave and fed them bread and water, to save them from Jezebel. To escape the Midianites, the Israelites lived temporarily in caves. Elijah himself lived in a cave. Even Job mentions people who lived in caves (Job 30:6).

From the viewpoint of biblical history, as people spread out after the confusion of languages at Babel, they would have constructed a variety of homes—some temporary and some permanent—such as tents, or made of mud, stone or wood, and many people would surely have taken up residence in caves. (The receding waters of Noah’s Flood probably carved many caves—see Caves for all seasons.) Thus, you would expect evidence all over the world that people lived in caves.

One interesting example comes from the island of Malta, south of Sicily in the Mediterranean Sea.

Mediterranean people have always liked caves and grottos as convenient and cool dwelling places. Malta is no exception. Here, the tradition of cave dwelling goes back to antiquity. There is strong archaeological and documentary evidence that cave dwelling, or troglodytism, was very popular during medieval times, too. When Jean Quintin d’Autun wrote about the island in 1536,1 he was surprised by the great number of cave dwellers in Malta; and there were still some people living in caves till very recent times. The remains of several of these cave settlements are still present, including some that had cave churches.

Ghar il-Kbir (the Great Cave) is the best-known of these settlements.2,3,4,5,6 It consists of eight smaller caves, on two different levels, surrounding a large natural cavern. The roof of the cavern (technically called a ‘karst hollow’) has collapsed. The cave dwellers inhabit the smaller caves, having built stone walls inside (as well as at the entrance) to separate their living quarters. There is no evidence of wall painting (which is found at some other sites), but there are various works in stone—loops in the ceiling, ducts, shelves and niches, which evidently served practical purposes.

The cave dwellers inhabit the smaller caves, having built stone walls inside (as well as at the entrance) to separate their living quarters.

The date of the earliest settlement at Ghar il-Kbir is unknown, but the first known mention of it, in 1544, is a reference to Simone Camilleri de gar il-chibir (Simone Camilleri of the Great Cave). The Maltese historian Giovanni Francesco Abela includes Ghar il-Kbir in his list of inhabited places on the island. He describes it as a vast cavern where 117 people lived, grouped in 27 families.7 They were pastori e pecorai—‘shepherds and sheep-herders’.

The most dramatic description of life at Ghar il-Kbir is given by the German scholar Athanasius Kircher (1602–1680) in his voluminous book Mundus Subterraneus (Latin for ‘World Beneath the Earth’).8 When he visited the place, tall, strong and simply dressed children and adults greeted him. He also noted that the women were remarkable for their good looks (which contrasts markedly with the pictures of brute and coarse women in children’s books!).

The people were vegetarians, eating vegetables, cheese and home-baked bread, and using dried cow dung to fuel their fires. The men worked in the fields and tended animals, which were taken to town for sale. The women took care of the children and made cheese. Drinking water was stored in large earthen pitchers. The cavern was ventilated by shafts, devised to exclude rain and wind. The cave dwellers decorated the caves with crosses and holy pictures. 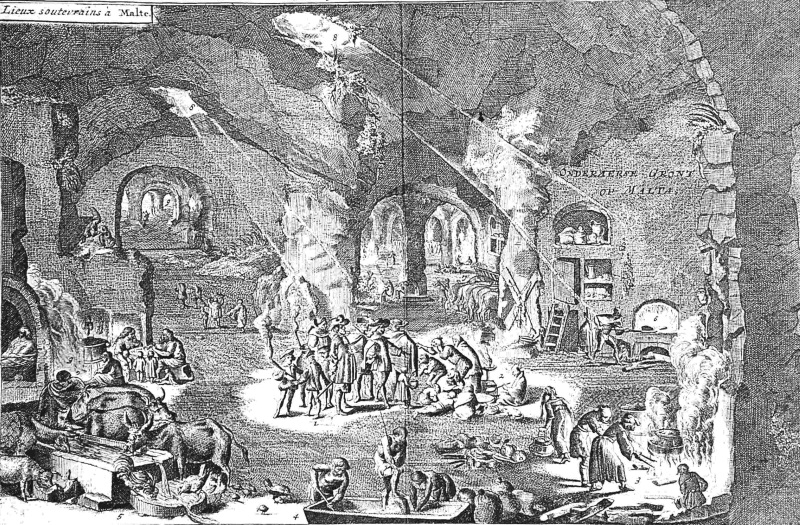 The 18th-century print shown here, engraved by Peter van der Aa, depicts a scene of everyday life in the settlement.

Ghar il-Kbir became a mini–‘tourist attraction’ among the travellers of that day. Imagine visiting a real-life community in a cave. The published account of a German visitor, Athanasius Kircher, was most vivid:

“In 1637, when I was in Malta, … [my host mentioned] that there was a hill in the vicinity where people who were his subjects live underground. He expressed the wish that I go and see them and admire the art with which they adorn these caves and how they organize the place where they live. …

“[T]hey had truly well-organized rooms. … Here they have a bed dug out of solid rock. There, in the wall, they have a wall cupboard where they keep bread and cheeses. In another place they have pens for cows, sheep, and donkeys; and some hens as well. Pottery jars, large enough to hold water instead of cisterns, were not lacking. Onions and garlic, tied in bundles like festoons were hung up, adorning the walls.

“There were also ovens for baking bread. … The ovens also have chimneys, otherwise … smoke would spread in the cave and the people would suffocate. …”1

The population gradually decreased, but some inhabitants still remained there at the beginning of the nineteenth century. According to popular accounts, the British colonial government forcibly expelled the last residents in the 1830s and resettled them in nearby villages.

The church records in the nearby village of Dingli include personal details of the people who lived at Ghar il-Kbir.2 For example, in 1699, a 53-year-old man named Franco Vella lived there with his 38-year-old wife, Filumena, and their three children.

Clearly, these cave dwellers were normal people who interacted with nearby villagers. While the noble and rich lived in palaces, the ordinary people lived in stone houses or in caves. These cave dwellings could not compare in architectural beauty with the nearby Verdala Palace, but during the hot summer months, the caves were surely more comfortable than anywhere else on the island. The Puzzle of Ancient Man
by Donald Chittick
US $15.00
Soft Cover Vern R.
US February 18th, 2017
One can find several small cave communities here in the desert southwest that are for the most part, Mormon.
They have built really nice facilities with several bedrooms for family partitioned off for privacy between the families.
I have been in these with a friend and lent some advice for ventilation as the humidity increase in closed caves was causing mold. I was informed later that my advice was taken and the mold situation was turned around and minimized.
The people living in the caves loved living there.
Mike M.
GB February 15th, 2017
One does not have to look a the past to see cave-men. Troglodytes are alive and well all over the world: for instance in the Loire Valley, France, there are a number of cave villages currently inhabited - and cave dwellings come on the market just like any other property. One such, the appropriately named village of Troo, boasts on its website that it is 'the capital of new troglodytism'.
Graeme M.
AU February 15th, 2017
Generally speaking it appears we are so easily goaded into believing that cave dwellers were 'simple' people with very limited skills, suggesting from an intelligence level an inability to cope with nothing more than mere existence! Nothing could be further from the truth! These were intelligent humans using what was immediately available until something better could be established as their prosperity and experience grew.
In the Barossa Valley there is a hollow tree in which an early German migrant (Herbig) set up his home (circ.1855) and resided there for several years, the purpose being a temporary dwelling until he was financial enough to build.
I'm sure he was never considered sub-human!

A. H.
GB February 15th, 2017
Thank you for the article. Just two short factual questions. Were the caves in Malta used during the second world war as shelters during attacks on the island? Also were they more extensively used for health and safety reasons between these attacks?
Clearly we all know that disrupted lives lead to inventive solutions and creative adaptations.

Warren Nunn
February 16th, 2017
You may find answers to your questions about how Malta's caves have been used over the years elsewhere but, it seems logical to believe that they were put to use in times of war. It's a convenient place to protect people and supplies.
Read more comments