Reading through secular scientific journals and magazines, I have yet to see a writer ‘Ascribe to the Lord the glory due to his name’ (Psalm 29:2). Instead, when researchers report their studies of animals, plants, Earth and starry skies, they implicitly give the glory to ‘evolution’.

A closer look, though, shows it is not evolution at all. Evolution—in the sense of pond scum becoming petunias, or molecules becoming morning glory—requires an uphill change, an increase in genetic information. But the researchers describe how their claimed ‘evolutionary transition’ from blue to red flowers in morning glory is actually a downhill change; a decrease in information.

The ancestral (normal) blue/purple floral colour is due to pigments derived from a chemical called cyanidin. But the researchers discovered that mutations in Ipomoea quamoclit block production of cyanidin. Therefore a different chemical called pelargonidin builds up, resulting in red pigments and flowers. The researchers readily acknowledge this has been a downhill change, using such phrases as ‘pathway degeneration’ and ‘loss of the ability [to perform certain chemical processes1]’.

But this is the opposite direction to observed mutations today.2,3 So instead of saying that reversing the blue-to-red change was ‘very unlikely’, the researchers might just as well have said ‘impossible’. Indeed, they cite ‘Dollo’s law’—which states that character elimination is irreversible—as applying in this case. Thus the net information change in going from purple to red is one of debit, not credit, leaving evolution on the wrong side of the ledger—bankrupt of the necessary information (or any mechanism to generate it) to climb out of the red.

the net information change in going from purple to red is one of debit, not credit, leaving evolution on the wrong side of the ledger—bankrupt of the necessary information (or any mechanism to generate it) to climb out of the red

The Bible (Genesis 1:11–12) tells us that God made the plants (and everything else) as part of an originally ‘very good’ Creation (Genesis 1:31). But because of the first man’s disobedience the whole creation is now cursed (Genesis 3, Romans 8:19–22)—which logically explains the downhill slide from blue/purple to red (see Speciation, adaptation and natural selection are not evolution! below).

The Bible also tells us that from studying plants it ought to be obvious that they must have had a Designer (Romans 1:20). How could you ever get something that grows from a seed, extracts its own construction and maintenance materials from its surroundings, all fuelled by solar energy,4 arising by chance?

And as we delve further into the inner workings of plants, their mind-blowing intricacies become ever more apparent—man has not yet even fully described or identified all the processes going on in plants, let alone been able to duplicate them. It’s as if every plant comes with its own label proclaiming: ‘Designed!’

How apt that the words of our Creator, Lord and Saviour about the ‘lilies of the field’ reflect the superiority of what He has made over that which is man-made: ‘I tell you, not even Solomon in all his glory was clothed like one of these’ (Luke 12:27).

Speciation, adaptation and natural selection are not evolution! 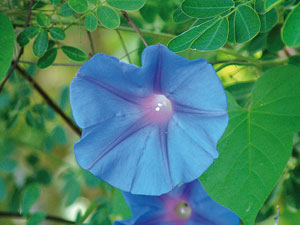 The degenerative slide in morning glory plants from purple/blue to red flowers through mutation (see main text) is consistent with the Bible’s account of a once-perfect Creation now ‘in bondage to decay’ (Romans 8:19–22)—not evolution.

‘But we’ve now got a new species’, some might say, ‘Isn’t that evolution?’

Actually, no. This and all other known examples of speciation involve a loss or reshuffling of existing information. But Darwinian belief requires massive amounts of new information.

In fact, really rapid speciation, in both plants and animals, is a surprise to evolutionists but a delight to informed creationists.1

Of course, the modern taxonomic concept of ‘species’ is not the same as the biblical ‘kind’. Today’s cabbage ‘family’ consists of hundreds of both weedy and agriculturally useful ‘species’ all descended from the same original kind.2 Such variation within a kind adds no new complexity and thus does not demonstrate evolution.

Note that when things ‘adapt’ to their environment, this is not algae-to-azaleas evolution, but simply the result of natural selection preferring some plants over others.3,4

Natural selection by itself can choose only from what is already there—it can’t create new, more complex, functional information needed to transform one type of organism into another.5

The oft-made claims of ‘abundant evidence’ for evolution turn out, on closer inspection, to be simply speciation, adaptation and natural selection—often associated with the same kind of degeneration evident in red morning glory flowers.6