It seems almost every few weeks the media announce a new ‘dramatic find’ which overturns previous ideas about ‘human evolution’. The Star (South Africa, July 28, 1995) described the finding of four incomplete foot bones as a ‘dramatic fossil find’. That such skimpy finds can radically modify evolutionists’ ideas demonstrates the flimsy nature of the various evolutionary hypotheses. That the fossil experts still get so excited over a few fragments of bone shows how short of hard evidence the whole story is.

It seems outrageous that so much is made of so little. It seems that little has changed since the days of ‘Nebraska man’ (Hesperopithecus haroldcookii), publicized in 1922. The Illustrated London News published an artist’s impression of a whole family of ‘ape-men’, based on the finding of a single tooth! A few years later the tooth was found to be that of a peccary, a type of pig, but that did not make headlines like Nebraska man’s ‘discovery’.

There is a long list of defunct ‘ape-men’. Neanderthal man heads the list. Evolutionists* hailed remains found in 1856 as man’s ancestor, but now it is admitted that the supposedly stooped posture was due to disease, and Neanderthal is really just a variant of the human kind.

Of course we must remember the most infamous: the Piltdown man fraud. Evolutionists used Piltdown man to ‘educate’ students about the ‘fact’ of human evolution for 40 years before the deceit was finally exposed.

Other obsolete ‘ape-men’ include Ramapithecus, Sivapithecus, various species of Australopithecus, and others, which have now been abandoned. The publicity given the claims made by palaeontologists about these fossils coerced many ordinary people to accept human evolution as a fact. The media greet the new ‘discoveries’ with great fanfare, but the demise of the old ones tends to be ignored, leaving laymen with the impression that human evolution is a fact.

Little seems to have changed from the days of ‘Nebraska man’. In 1994 the newspapers, and even television, eagerly reported the finding of ‘Boxgrove man’ in a quarry at Boxgrove, England. This was supposed to be an ancestor of the Europeans. Most of the reports included an artist’s reconstruction of what Boxgrove man might have looked like — an apish looking creature. ‘He’ was based on a piece of shinbone, with a paper in Nature1 giving credence to the story. The piece of shinbone looked like ordinary human shinbone, but The Sydney Morning Herald of May 19, 1994 called this ‘one of the most important finds in the history of human evolution’.

‘The missing link’ (Australopithecus ramidus) was given heavy publicity after publication of a paper in Nature2in 1994. What was found? Ten teeth in one spot, a couple of fragmented limb bones 270 metres away, two heavily chewed fragments of the base of a skull found 550 metres away and a few other bits and pieces found at the surface of the ground at up to more than 1 1/2 kilometres apart.

How do the palaeontologists know that all these bits belonged to the same kind of animal? They don’t! A relatively intact tooth found 1 1/2 kilometres from the main set of 10 teeth was discussed at length, but it is indistinguishable in all measurements from a chimpanzee tooth. 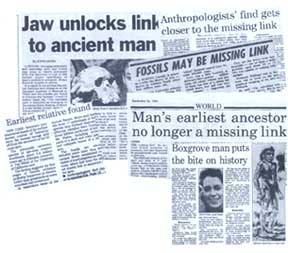 Newspaper and magazine articles often herald the finding of new bone fragments as yet another ‘missing link‘. In many cases if you could see the actual pieces you would wonder how so much could be made of so little! The public is often left with the impression that there are mountains of evidence to support the theory that man came from some ape-like ancestor, however there is much more reason to believe that man was created a complex living being right from the start, just as we are told in the Bible.

Although the fossils were found at the surface of the ground, they were given an ‘age’ of 4 million years based on the ‘dating’ of rocks nearby. Rocks closest to the fossils ‘dated’ at 23 million years, but the palaeontologists eventually found some rocks further away which gave an acceptable date (a date which would help qualify their find as ‘the missing link’).

‘Little Foot’ is one of the latest ‘hominid’ fossils reported in the newspapers. Based on four foot bones (shown shaded in the reconstruction below), two South African palaeontologists claimed they had discovered a hominid showing the transition from a grasping-type of ape foot to the human type.3 They speculate from this that these creatures would have spent some of their time ‘in the trees’. These fossils are supposed to be 3.5 million years old, based mainly on the ‘known’ age of other fossils found in the vicinity. They further speculate that the foot belonged to an ‘early’ australopithecine.

A human foot has 25 bones. Palaeontologists Clarke and Tobias found two more-or-less intact bones and two partial bones. The bones were originally excavated in 1980, but it was not until 1994 that Clarke ‘put all the pieces together’.4 Footnote 5 in the paper suggests that the bits were recovered from a rubble dump left by lime workers. The pieces could hardly have been found together, so how can they even be sure they actually go together? From this they built their speculative story. One sceptical evolutionist, Owen Lovejoy, in an accompanying article in Science,5 is quoted as saying, ‘Their conclusion [that the foot could grasp and so its owner spent some of its time in the trees] is patently absurd’. Lovejoy’s school believes that the australopithecines of that time were fully ground dwelling. It is a pity evolutionists could not be a bit more sceptical of all the claims associated with a few bits and pieces of this and that, and not just when it contradicts their own theories.

The Star newspaper report said, ‘An exciting feature of Little Foot is that its divergent big toe matches the position of the big toe in fossil footprints of Laetoli.’ Tobias, one of the authors of the Science article, said ‘Now, for the first time, we have the kind of fossil foot that would have made such footprints.’ Russell H. Tuttle of the University of Chicago made a detailed study of the Laetoli footprints, which are supposed to be 3.7 million years old. He wrote: ‘In discernible features, the Laetoli G prints are indistinguishable from those of habitually barefoot Homo sapiens.’6 This conclusion came from a detailed study of more than 70 Machiguenga Indians, a habitually barefoot people of Peru. Tuttle and Webb wrote: ’Casts of Laetoli G-1 and of Machiguenga footprints in moist, sandy soil further illustrate the remarkable humanness of Laetoli hominid feet in all detectable morphological features.’7

In other words, there is no basis for saying they are anything other than human footprints, other than the belief in evolution which prevents the evolutionist from admitting humans were around ‘then’ because of their faith in their dating systems and their evolutionary story.

The original article on ‘Little Foot’ in Science is devoid of some of the wilder claims made in the popular newspaper articles, but it has plenty of speculation. Comparing the photo of the bones in The Star with the one in Science suggests that the authors have arranged the bones for the Science photo to make them look like they articulate better than they actually do. Also, much of the argument for the ape-like nature of the bones is based on the supposed splaying of the first toe. How robust is this claim? The bones seem to be displaced slightly in the photo in Science to accentuate the splaying of the toe digit to the right. The talus bone is apparently incomplete.

What did the bits of bone belong to, if indeed the pieces belong together? Foot bones can vary considerably within a species. Shod and unshod human feet look quite different. It would be interesting to compare the bits found with a range of human, chimp and australopithecine foot bones, not just the ones chosen by the authors and possibly arranged for photographs in such a way as to bolster their argument. But then with so few bits of bone to go on, who can be sure just what it is?

All this reminds me of the statement made by Nigel Hawkes in The Times (London), 23 September, 1995: ‘Few sciences produce such abundant returns from so few fragments of fact as palaeontology.’ Remember this when you see the next newspaper report of some new fossil ‘hominid’ find. You have a right to be sceptical.

I strongly recommend Marvin Lubenow’s Bones of Contention (Baker Books) for a good overview of the whole human evolution story from a creationist perspective. This helps considerably in placing the evolving stories of human evolution in context.

What about Java Man?

Eugene Dubois, a Dutch physician inspired by the infamous Haeckel and his imaginary ‘speechless ape-man’, Pithecanthropus alalus (see See Grigg, R., Ernst Haeckel, Creation 18(2):33–36, March 1996), went to Java in 1887 determined to find the ‘missing link’. Java Man resulted. ‘Java Man’ derived from a few teeth, a skull cap and a leg bone found in Indonesia in 1891 and 1892. The leg bone was found 14 m (45 ft) from the skull cap, but the two were linked together to make the ’missing link’. The leg bone looks like an ordinary human one, although the skull cap differs from the average human type. Because of the similarities to ordinary humans, Pithecanthropus erectus (‘upright ape-man’), as palaeontologists once knew him, is now Homo erectus (’upright human’). Homo erectus fossils have now been found in the same strata as average human type fossils, so they appear to be just a variant of the human kind, not an ancestor.

* There were evolutionary theories before Darwin’s was published in 1859. Charles Darwin’s own grandfather published one. Some Greek philosophers before Christ espoused evolutionary ideas.