Our brain: Do we use only a small portion of it?

There is a very widespread belief that we humans only ever use 10 to 20% of our brain. Attributed to Albert Einstein, it is one of the ‘grab’ statements used to recruit people for the cult of ‘Scientology.’ It is also a favourite of new-agey ‘positive thinking’ gurus.

The reason for its wide acceptance may be because Dale Carnegie’s popular 1936 book, How to Win Friends and Influence People, stated that most people only use 15% of their brains—a ‘fact’ probably pulled from thin air.1

There have been many recent advances in brain research techniques, including sophisticated scanners. However, we still don’t know much about how the brain works overall. We know next to nothing about how it processes information.

We know certain activities originate in the cerebral cortex,2 and that certain memories are stored there. But we don’t know where and how they are stored, nor how we can recall memories, or come up with new ideas, for example. The little we do know has come about largely from studying people whose brains have been damaged through accidents, strokes or tumours.

So this oft-repeated belief is just plain wrong. If it were true, things which damage the brain would not have such drastic consequences for our ability to think, speak, and remember.3 If you compare it to a computer, the ‘hardware’ is all there, ready to process complex or relatively simple software tasks, which can vary from time to time. No computer uses all of its processing circuitry at once—in our brain, that would be like a major epileptic seizure.

When researchers in the 1960s began to map out certain areas for certain functions, others remained unknown, which may have reinforced the myth. 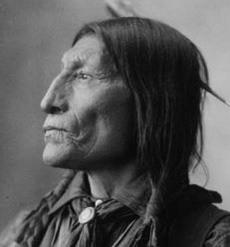 Bill McClendon, of Colorado, drew our attention to this 1898 photo of chief Wolf Robe of the Cheyenne. Bill rightly points out that evolutionists often attribute ‘sub-human’ status to fossil human skulls (e.g. Homo erectus) on account of such features as:

If this proud, skilled warrior chieftain were alive today, he would doubtless join us in strongly disputing any such classification for himself. The early post-Flood descendants of Noah exhibited a great degree of genetic and environmental variation in skull and facial features, as seen in the differences between Cro-Magnons and Neandertals, for instance. We should not be surprised to see features reminiscent of some of these groups in people today.

But in the 1920s, experiments on rats had already shown that any removal of brain tissue caused a loss of performance. Rats were taught simple tasks (like navigating a maze), then a portion of their brain cortex was removed. The results indicated ‘that memories were stored throughout the cortex and not in one particular place: the more of the cortex was removed the worse the rats’ performance became.’

So, did Albert Einstein believe the myth? In fact, he may have ‘used it as a wry answer when asked by a journalist why he was smarter than other people.’1

Many people with a blockage in the flow of brain fluid (hydrocephalus), in whom the developing brain was slowly compressed to a thin sheet, have been shown to have normal or superior intelligence. One such person obtained a first-class degree in mathematics, although his brain was thinned out from its normal 45 mm (1¾") thickness to one mm on average!4 Far from showing that the rest was unused, this indicates that the developing brain has a tremendous ability to compensate for such a slowly encroaching neurological problem.

Our brains have actually been designed with an amazing compensatory capacity. After a stroke, some of the lost function can be taken up by other, undamaged portions. Also, the region of the brain to do with hand control enlarges as people learn to play, say, the guitar. In people who go blind, the sense of touch is greatly enhanced to compensate.

Why should chance mutation, coupled with natural selection, favour the development of exquisite touch in blind individuals? Most blindness occurs way past the reproductive years, so from a Darwinian point of view, such ‘compassionate’ design features, useful only in case of major disaster, are hard to explain. They make sense in a body designed by an intelligent Creator to cope in a fallen world.5 Our brain is by far the most complex thing in the universe.

Next time you hear someone quote that urban myth about ‘only using 10% (or 20%) of our brain’, ask them—how do they know? How was this calibrated or measured? It hasn’t been, of course. It might be a useful way to get them thinking critically about other things (like evolution) which they have likewise absorbed as ‘truth.’

Author’s note added December 2022: Since this article was published over a decade ago, much more continues to be learned about the human brain. It seems that this research has, if anything, reinforced the conclusion that the ‘we only use 10%’ idea is a myth. For example, functional magnetic resonance scanning shows that during even non-complex tasks, most of the brain is active, including during sleep. (It is not clear what would be different about the conclusion if the myth were reinterpreted to refer to the brain’s ‘potential’, since that presumably still refers to its potential for activity, as distinct from an individual’s human potential, for instance.