‘Out of Africa’ on the ropes

The favoured story of evolution is now struggling

Most visitors to the American Museum of Natural History look in awe at the allegedly pre-human ‘apemen’ (a.k.a. ‘hominins’ or ‘hominids’), including those in the ‘Our Family Tree’ display (fig. 1). Using skull casts, it illustrates the claimed evolutionary relationship between them—clearly meant as a kind of knockout punch to anyone still daring to doubt that man is no more than a highly-evolved ape.

Creation magazine has previously highlighted that despite all the hype, the human evolution story is—to put it mildly—rather less ironclad than the impressions given by such displays, in education, and in the media generally.1 In fact, it faces seemingly insurmountable biological barriers that are even beginning to alarm some evolutionists. Our article showed that even the claimed six million or so years allotted for humans and chimps to evolve from the same ancestor is way too little time for mutations to effect the transformation.

Interpretations and ‘dates’ of fossil skulls are in turmoil, too; notions once proclaimed as near-certain are often later discarded. Others keep accumulating difficulties and are repeatedly ‘patched up’, seemingly awaiting the time when alternative ideas will permit their abandonment. This includes the leading ‘African’ model of human evolution.

Out of Africa revisited

The chief ‘African origins’ model of human evolution has been the Out of Africa Model (OoAM), often called the African ‘replacement’ model.2 The OoAM argues that modern humans (Homo sapiens) evolved in East Africa, and that this was only about 200 ka (thousand years ago).3

Interpretations and ‘dates’ of fossil skulls are in turmoil, too; notions once proclaimed as near-certain are often later discarded.

(Note: the long-age ‘dates’ herein are given to properly explain the models being critiqued, but reflect the beliefs/assumptions within evolutionism, not those of the author, which includes a recent creation c. 6ka).

These modern humans then spread throughout the world—perhaps beginning as early as 120 ka, though this date is usually thought of as a brief, temporary occupation in Israel.4 The beginning of the main emergence from Africa is often dated at c. 70 ka.4 These modern humans then supposedly spread throughout Asia, Europe and the rest of the Old World, allegedly replacing “other less advanced humans, such as Neanderthals.”5 The replacement was said to have occurred with little, or no, hybridization (interbreeding).2

The main evolutionary alternative to OoAM has long been ‘multiregionalism’, but until recently this was out of favour. Multiregionalism argues that the ancient ancestors of today’s various human groups were humans (Homo erectus) that migrated out of Africa nearly two million years ago.6 They lived roughly where they are today, evolving in parallel in these different regions into today’s modern humans.

It is argued that “gene flow between the groups through interbreeding spread important changes throughout and was sufficient to maintain humans as a single species.”6

The once-dominant OoAM has recently fallen on hard times. For starters, any OoAM that proposed near-pure replacement (little, if any, interbreeding between groups) has been made untenable by mounting evidence from ancient DNA. This indicates significant and repeated interbreeding (introgression) between modern humans and other human groups, such as Neanderthals and the mysterious Denisovans—which means they are the same species (see box below).7

Then a 2017 report, using evolutionary ‘dating’ assumptions, reported that the mitochondrial DNA (mtDNA) in a Neanderthal thigh bone from c. 124 ka indicated that African mtDNA genes had flowed into Neanderthals—over 270 ka.8 But from an evolutionary viewpoint, this puts early modern humans in or near Europe at a time long before they left Africa—in fact, before they had even evolved there!

That same year, a Homo sapiens fossil skull from Jebel Irhoud, Morocco (fig. 2 within box) was re-dated from about 160 ka to a much earlier 315 ka.9,10 From an evolutionary perspective, it meant humans appeared in Africa over 100,000 years earlier than thought—and in North Africa, not East Africa, as believed.

This then prompted other researchers, who saw similarities of the Jebel Irhoud skull with the Dali skull from China (~260 ka), to suggest that “features associated with H. sapiens may have evolved in east Asia, and been carried to Africa”—which would mean our origins were not solely African, as per the OoAM.11

Recently, an upper jawbone and associated teeth from Misliya Cave, Israel, with features consistent with Homo sapiens, were ‘dated’ at from 177 to 194 ka, which would mean that “members of the Homo sapiens clade left Africa earlier than previously thought.”12 Previously, the earliest modern human fossils found outside of Africa were allegedly around 90–120 ka, at Skhul and Qafzeh, also in Israel.12

THE FOLLY OF COMPROMISE

Many who follow the teachings of Canadian astronomer Hugh Ross believe in supernatural creation and oppose evolution (often to the extent of denying even such obvious realities as natural selection and speciation). And they hold to a literal creation of Adam and Eve.

But they believe this happened billions of years after many batches of other living things had been progressively created as vast geological ages unfolded. Their whole position is based on the acceptance of secular ‘dates’ and the ‘big bang’.

We have often pointed out the many problems with this. For one thing, it puts vast ages of death and suffering before sin, and the ‘big bang’ has the sun appearing before Earth, contra Genesis 1.

But it also has a problem with the biblical genealogies from Adam to Christ; arithmetic indicates only c. 6,000 years since Adam’s creation until now. Ross once proposed that Adam’s creation (as the first true human, Homo sapiens) was c. 25,000 years ago. All other apparent humans like Neanderthals, Homo erectus, etc., which have secular ‘dates’ of hundreds of thousands of years, were therefore merely soulless humanoids.

This already stretched the genealogies drastically, but he later expanded that to 60,000 years, seemingly beyond all credulity. This was presumably in response to secular ‘dating’ of Australian Aboriginal habitation as over 50,000 years ago.

However, the ‘dating’ of the Moroccan Homo sapiens skull pictured here to over 300,000 years ago (see main text) is frankly catastrophic for the Ross position. It puts the possibility of reconciling this date with the Bible’s genealogy record into the realm of fantasy. It also has the early patriarchs living hundreds of thousands of years ago. And it has them sharing the earth with all of these very human-looking non-human entities—nowhere mentioned in Scripture—that made ingenious tools and dwellings, played music, and more.

This is in addition to what should have already been a fatal problem, namely the DNA evidence that our ancestors were interbreeding with Neanderthal people (main text). The defence put forward that this represents ‘bestiality’ is disingenuous at best; if people can have children with Neanderthals, it means they are the same biological species, biblically the same created kind—i.e. people, descendants of Adam and Eve (see Neandertal-Human Hybrids: old earth apologetics gone real bad).

Conversely, once the biblical record is given precedence over the secular dating with all its problems, the facts easily fit Genesis.

The shifting sands of evolution

So, with the OoAM falsified by their own data, will evolutionists abandon it? Unlikely; while admitting the “need to radically rethink how our species emerged”, we see efforts to adapt the latest findings to new ‘evolving’ stories.13

Various forms of multiregionalism are being toyed with again to various degrees. A consortium of 23 evolutionists recently put their names to a paper arguing for a model they named ‘African multiregionalism’.14 According to Scerri et al.: “new data suggest that a variety of transitional human groups, with a mosaic of primitive and derived features, may have lived over an extensive area from Morocco to South Africa between >300 ka and 12 ka.”15 Not abandoning an African origin of H. sapiens, they propose a vague Africa-wide version of multiregionalism, remaining largely silent on events outside the continent. Kate Wong sums up their position:

Rather than evolving as a small population in a particular region of Africa, they propose, our species emerged from a large population that was subdivided into smaller groups distributed across the vast African continent that were often semi-isolated for thousands of years at a time by distance and by ecological barriers such as deserts.16

Henn et al. recently outlined four possible models for the origins of Homo sapiens in Africa, including African multiregionalism.17 That there is a ‘model smorgasbord’ indicates considerable uncertainty, which prompts questioning of an African origin itself.

Other evolutionists are once more leaning towards global multiregionalism. On new fossil finds overturning the OoAM, anthropologist Sheela Athreya remarked:

With each new find, researchers and news headlines announced that the fossils significantly altered our understanding of human evolution and dispersal from Africa. But if we have to rewrite the story of H. sapiens evolution so frequently, we might ask whether the plot we’re using is wrong to begin with.18

The evidence we do have indicates that a range of biological variation has long been present, within people, apes, and australopithecines (now extinct) alike.

Athreya is involved in research at Bhimbetka, India, where they seek “to make the evolutionary narrative more inclusive”, focusing on relatedness between present and past populations.18 She appears to be considering regional continuity (multiregionalism), particularly in South Asia.

New research and a new generation of researchers are challenging these presuppositions at the heart of the discipline, and evidence is mounting to suggest that modern humans do not have an origin. Instead, we may be looking at fuzzy boundaries and messy origins. These terms are not as clean, but they are more likely to get us closer to [the] true story of human evolution.19

Lee appears to adopt a global multiregional evolution approach, writing: “Modern humans arose at different times in different places, not as a separate species, but rather a continuation from the indigenous populations.”19

The newfound embrace of the oft-scorned multiregionalism model, whether continental (African) or global versions, is ironic given that both it and the OoAM, at least in their strictest versions, are even by evolutionists “now generally regarded as falsified.”20

Global multiregionalism is no more believable than the OoAM. Even from an evolutionary viewpoint, it does not seem credible that for nearly two million years gene exchange between small Homo erectus populations, thinly scattered across several continents, helped keep them all united as a single species, while the different populations evolved separately into the anatomical modern human form, all getting there around the same time.

The evidence we do have indicates that a range of biological variation has long been present, within people, apes, and australopithecines (now extinct) alike. And people have always been people. As a 2018 Creation article21 quoted from a very recent study by evolutionists themselves, the mtDNA evidence is consistent with all people having descended from “a founding pair”.22

Rather than patching up untenable evolutionary models, a biblical model is a much more realistic basis for further research. 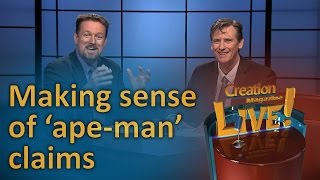 Refuting Compromise
by Dr Jonathan Sarfati
US $12.00
Soft Cover
The Evolution of Human Evolution
US $10.00
DVD
Apemen: ‘Missing Links' & The Bible
US $10.00
DVD