This article is based on a recent biography of the young Joseph Stalin.1

Trainee priest, revolutionary bank robber, and murderous dictator Joseph Stalin began life as Iosif Vissarionovich Djugashvili (Russian script: Ио́сиф Виссарио́нович Джугашви́ли). He was born in Gori, Georgia, in the Russian Empire of 1878.1,2 His mother’s pet name for him was ‘Soso’, the diminutive of ‘Joseph’. He himself used many names during his later secret life, but in 1913, he adopted the name Stalin (Ста́лин), meaning ‘man of steel’ (Russian stal’ сталь = steel).

His father, Vissiaron, or ‘Beso’, was a violent alcoholic who beat his son for the least or no provocation. Once he threw Soso to the floor so hard that there was blood in the boy’s urine for days. Soso was terrified of the drunken Beso. A friend wrote, ‘Undeserved beatings made the boy as hard and heartless as the father himself’, and it was thus through his father that ‘he learned to hate people’.3

In 1888, at age 10, Soso was one of 150 boys enrolled at Gori’s excellent Church School. His mother wanted him to become a bishop, but the school was accepting only the children of priests. A priest solved this problem by stating that Soso’s father was a deacon. Soso excelled in Gori’s three main diversions—town brawls, wrestling tournaments for all ages, and schoolboy gang-warfare.

The choir boy who read the Psalms, Darwin, and Marx

Young Soso had a beautiful singing voice, coupled with a grand style of performance. He sang in the church choir and was often hired to sing at weddings, which he did from the pulpit, wearing his surplice. In his younger years he was so devout that he barely missed a mass. A schoolfellow, A. Chelidze, remembers, ‘He not only performed the rites but always reminded us of their significance.’ He was the best reader of Psalms in the church. The Church School presented him with David’s Book of Psalms inscribed ‘To Josef Djugashvili … for excellent progress, behaviour and excellent recitation and singing of the Psalter.’4

An avid reader, [Stalin] acquired a copy of Darwin’s Origin of Species when he was about 13.

An avid reader, Soso acquired a copy of Darwin’s Origin of Species, when he was about 13.5 One day, he and some friends were talking about the injustice of there being rich and poor. Soso amazed them all by saying, ‘God’s not unjust, he doesn’t actually exist. We’ve been deceived. If God existed, he’d have made the world more just. I’ll lend you a book and you’ll see.’ He produced a copy of Darwin’s book.6

At age 15, Soso, now an outstanding student, won a scholarship to be a trainee priest at the Georgian Orthodox Seminary at Tiflis (Tbilisi), regarded as the best religious educational establishment in the southern Russian Empire. However, according to fellow revolutionist (and later enemy) Trotsky, the Empire’s seminaries were ‘notorious for the savagery of their customs, medieval pedagoguery, and law of the fist’. The one at Tiflis was nicknamed the Stone Sack. ‘All the vices banned by the Holy Scriptures flourished in this hotbed of piety.’7,8

Biographer Montefiore comments, ‘The Seminary was to pull off the singular achievement of supplying the Russian Revolution with some of its most ruthless radicals.’7 One of Stalin’s fellow students wrote, ‘No secular school produced as many atheists as the Tiflis Seminary.’7

Soso developed a thirst for the writings of revolutionaries, such as Victor Hugo, Emile Zola, Marx and Engels, all authors whose books were banned by the Seminary. He appears to have spent much of his time reading banned books and being detained in the punishment cell for having done so. This was mainly due to the vendetta of one teacher whom Soso nicknamed ‘the Black Spot’, who spied on Soso and regularly searched his possessions. Black Spot taught the young Stalin ‘exactly the repressive tactics—“surveillance, spying, invasion of inner life, violation of feelings”, in Stalin’s own words—that he would recreate in his Soviet police state’.9

In his fifth year, at the end of term, Soso failed to return. The Seminary Journal reported that he had declared himself an atheist, and in May 1899 simply noted that he had been ‘expelled … for non-appearance at examinations’.

Soso now became a streetfighter, gang-leader, and professional revolutionary against the Russian monarchy. In 1903, he joined the Bolshevik Party10 and became a specialist in bank robbery and extortion to fund Bolshevik activities. In 1907, in the town square at Tiflis, he masterminded the armed hold-up of a Treasury coach carrying roubles to the local Imperial Bank, which netted the today-equivalent of about US$3.4 million for the Bolsheviks.11 Ten bombs were used. Forty people were killed. Lenin is reported to have said that this ‘is exactly the sort of person I need’.

In 1913, Soso changed his name to Stalin. Although repeatedly arrested and imprisoned, he often escaped, but then was exiled to Siberia until 1917. After the Revolution of that year against Tsar Nicholas II, he rose rapidly through the ranks of the Communist Party. Following the death of Lenin in 1924, he progressively ousted his rivals, and became Supreme Leader of the Soviet Union.

Devotees called him the ‘hope of the future for the workers and peasants of the world’. However, the confiscations of grain and other food by Soviet authorities under Stalin’s orders contributed to a famine that by 1937 resulted in the death of several million Soviet peasants.

In the late 1930s, Stalin consolidated absolute power for himself by several campaigns known as the Great Purge or the Great Terror, to dispose of all political opponents and anyone he suspected might threaten his position. He had grasped well ‘the convenience of death as the simplest and most effective political tool’.12

Those purged were members of the Communist Party (both opponents and former comrades), the Red Army, and indeed every segment of society, including over 100,000 priests, monks and nuns of the Russian orthodox church.13 Montefiore says, ‘During 1937–38 around one and a half million people were shot. Stalin personally signed death-lists for almost 39,000 people, many of them old acquaintances.’14

Following Stalin’s death, Nikita Khrushchev emerged as leader of the Soviet Union. In 1956, he famously denounced Stalin’s crimes in a speech to the 20th Party Congress. He said that the purges had ‘resulted in enormous harm to the country’, and that ‘many of the victims were innocent and were convicted on the basis of false confessions extracted by torture’.15

In 1991, Soviet archives became available. These record that about 800,000 prisoners were executed (for either political or criminal offences) under Stalin, while about 1.7 million died in the Gulag (penal labour camps16) and some 389,000 perished during ‘ethnic cleansing’ of various groups to ‘internal exile’ in central Asia and Siberia before, during and after World War II. Most history researchers regard these figures as far too low. Montefiore says, ‘Perhaps 20 million had been killed; 28 million deported, of whom 18 million had slaved in the Gulags.’17

Darwin … gave him the ‘justification’ his mind needed to reject the concept of God and hence the authority of the Bible in his life.

How and why did the choir-boy-turned-trainee-priest become one of the greatest mass murderers in history,18 one for whom killing a million people seemed to be no different from mowing grass?

Undoubtedly a huge part of the answer goes back to his reading Darwin at the tender age of 13. This gave him the ‘justification’ his mind needed to reject the concept of God and hence the authority of the Bible in his life.

It also paved the way for him to accept the atheistic revolutionism of Marx, and to remove any restraint he might have had to killing off his opponents, i.e. the ruthless elimination of the ‘unfit’; perhaps, in the process, wreaking unconscious vengeance for some of his childhood pain.

The seminary he attended obviously had no adequate answer for his claims of atheism. And whatever truth it taught was not helped by the un-Christlike behaviour of its teachers. Then, having rejected God and His Word, the teenage Stalin filled the spiritual vacuum in his mind with the thoughts and beliefs of revolutionaries. The rest is history.

Well, not quite all. There is still one chapter to come. The Bible says: ‘[I]t is appointed for men to die once, and after that comes judgment’ (Hebrews 9:27); ‘all that are in the graves … shall come forth; … they that have done evil, unto the resurrection of damnation’ (John 5:28–29). 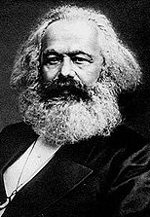 Karl Marx (right) read Darwin’s Origin of Species soon after its publication in 1859 in England. This provided what Marx believed was a scientific rationale to deny creation and, by extension, to deny God. He immediately believed that it supported his worldview that the major ‘struggle for existence’ among humans occurred between the social classes (classes being likened to species). In 1861, he wrote to his friend Ferdinand Lassalle, ‘Darwin’s work is most important and suits my purpose in that it provides a basis in natural science for the historical class struggle.’1

In 1873, Karl Marx sent Darwin a copy of his own book Das Kapital with a personal inscription. Harvard evolutionist and Marxist, the late Stephen Jay Gould, corroborates this by reporting that he saw this volume (in Darwin’s library at Down House), in which Marx calls himself ‘a sincere admirer’ of Darwin. Darwin responded with a polite ‘thank you’ letter, but apparently never read the book, as most of the pages are uncut.2

However, it is an urban myth that Marx wanted to dedicate his book to Darwin. Rather, the request for dedication came from Marx’s daughter’s lover, Edward Aveling.3