That quote!—about the missing transitional fossils

Anyone reading creationist literature for a few years soon becomes aware that we often use quotes by evolutionists which discredit their own belief system. This raises the ire of many in the evolutionary establishment, and often they will accuse creationists of ‘taking their remarks out of context’. This is rarely the case. However, one can imagine that the spectre of condemnation from fellow evolutionists would these days tend to limit any careless remarks from the pro-evolutionary camp.

One of the most famous and widely circulated quotes was made a couple of decades ago by the late Dr Colin Patterson, who was at the time the senior paleontologist (fossil expert) at the prestigious British Museum of Natural History.

So damning was the quote—about the scarcity of transitional forms (the ‘in-between kinds’ anticipated by evolution) in the fossil record—that one anticreationist took it upon himself to ‘right the creationists’ wrongs’. He wrote what was intended to be a major essay showing how we had ‘misquoted’ Dr Patterson.1 This accusation still appears occasionally in anticreationist circles, so it is worth revisiting in some detail.

Dr Patterson had written a book for the British Museum simply called Evolution.2 Creationist Luther Sunderland wrote to Dr Patterson inquiring why he had not shown one single photograph of a transitional fossil in his book. Patterson then wrote back with the following amazing confession which was reproduced, in its entirety, in Sunderland’s book Darwin’s Enigma:

‘I fully agree with your comments on the lack of direct illustration of evolutionary transitions in my book. If I knew of any, fossil or living, I would certainly have included them. You suggest that an artist should be used to visualise such transformations, but where would he get the information from? I could not, honestly, provide it, and if I were to leave it to artistic licence, would that not mislead the reader?’

He went on to say:

‘Yet Gould [Stephen J. Gould—the now deceased professor of paleontology from Harvard University] and the American Museum people are hard to contradict when they say there are no transitional fossils. … You say that I should at least “show a photo of the fossil from which each type of organism was derived.” I will lay it on the line—there is not one such fossil for which one could make a watertight argument.’3 [Emphasis added].

Transitional fossils are the remains of those creatures which should be found ‘in-between’ one kind of creature and another kind. For example, evolutionists have long sought  the ‘missing link’ between ape and human—some sort of half human/half ape intermediate form. None has ever been found, though many candidates have come and gone. Amplified, no doubt, by the lure of prestige, fame and fortune, the desire to discover such a fossil has led some even to fabricate evidence, such as with the famous Piltdown Man hoax. In that case, though the perpetrator has never been definitively identified, a human skull was ‘planted’ with an ape’s jaw which was crudely ‘doctored’. The result fooled the world for decades into thinking this was proof of human evolution.

An anticreationist tries to minimize the damage

The anticreationist sceptic mentioned earlier wrote to Patterson asking for clarification about the comments in Sunderland’s book. Patterson replied that the quote was accurate in its reproduction, but its interpretation was faulty because he had also written:

‘The reason is that statements about ancestry and descent are not applicable in the fossil record. Is Archaeopteryx the ancestor of all birds? Perhaps yes, perhaps no: there is no way of answering the question.’1

Well, precisely. So why have evolutionist textbooks almost universally and dogmatically declared Archaeopteryx to be an obvious transitional form? But the issue goes deeper. Patterson’s ‘revision’ seemed to be claiming (or at least it was in the way the sceptic tried to highlight it) that all he meant with his original quote was that it is impossible to determine whether any ‘candidate’ fossils (ones that might have the appearance of transitional forms) actually were real transitional ones—not that there was a scarcity or absence of inbetween forms in the fossil record. In other words, they might look like missing links, but how can one know for sure?

However, to suggest that this was all he was saying is really impossible to square with the words of the quote itself. Note, for example, how Patterson referred to comments by Stephen J. Gould and ‘the American Museum people’ who are well-known to have specifically admitted the rarity of transitional forms in the fossil record. They actually proposed a theory of ‘evolution in jumps’4 to explain away the fact that links seemed to be absent.

Gould even said in another place that ‘The extreme rarity of transitional forms in the fossil record persists as the trade secret of paleontology. The evolutionary trees that adorn our textbooks have data only at the tips and nodes of their branches … in any local area, a species does not arise gradually by the gradual transformation of its ancestors; it appears all at once and “fully formed.”’5

So if one rereads the original Patterson quote above, it is clear that it is perfectly legitimate to use it to highlight this ‘extreme rarity of transitional forms’ in the fossil record. Otherwise, the reference to Gould is meaningless.

The context of Sunderland’s letter to Patterson also needs to be remembered. He was simply asking why Patterson didn’t show even one single picture of any proposed transitional form anywhere in his book. Patterson’s reply made it abundantly clear that if he did, it would be storytelling, not science! In fact, he went on to say in his original letter to Sunderland:

‘It is easy enough to make up stories of how one form gave rise to another, and to find reasons why the stages should be favoured by natural selection. But such stories are not part of science, for there is no way of putting them to the test.’ [Emphasis added].

Evolutionists often make these kinds of frank admissions among themselves. But they are generally ‘not for publication’ as public dissension is regarded as being traitorous to the cause.

Note what Patterson said in his response to the anticreationist in question:

‘I seem fated continually to make a fool of myself with creationists. … I hope that by now I have learned to be more circumspect in dealing with creationists, cryptic or overt. But I still maintain that scepticism is the scientist’s duty, however much the stance may expose us to ridicule.’1

He seems to be saying that it’s OK to doubt as long as we don’t let the creationists know.

Being a world-renowned fossil expert, Patterson’s frank admissions were embarrassing to adherents of the ‘religion of evolution’

Being a world-renowned fossil expert, Patterson’s frank admissions were embarrassing to adherents of the ‘religion of evolution’—including himself, it would appear. But there were even more devastating revelations to come from Dr Patterson.

During a public lecture presented at New York City’s American Museum of Natural History on 5 November 1981, he dropped a bombshell among his peers that evening, who became very angry and emotional. Here are some extracts from what he said:

‘ … I’m speaking on two subjects, evolutionism and creationism, and I believe it’s true to say that I know nothing whatever about either … One of the reasons I started taking this anti-evolutionary view, well, let’s call it non-evolutionary, was last year I had a sudden realisation.

‘One morning I woke up … and it struck me that I had been working on this stuff [evolution] for twenty years, and there was not one thing I knew about it.’—the late Dr Colin Patterson, formerly senior paleontologist, British Museum of Natural History

‘… One morning I woke up … and it struck me that I had been working on this stuff [evolution] for twenty years, and there was not one thing I knew about it.’ He added:

‘That was quite a shock that one could be misled for so long … I’ve tried putting a simple question to various people and groups of people: “Can you tell me anything you know about evolution, any one thing that you think is true?” I tried that question on the geology staff in the Field Museum of Natural History, and the only answer I got was silence. I tried it on the members of the Evolutionary Morphology Seminar in the University of Chicago … and all I got there was silence for a long time, and then eventually one person said: “Yes, I do know one thing. It ought not to be taught in high school.”.’6

Although these are only excerpts from Patterson’s very frank and startling lecture that evening (the full text is even more revealing), it is plain to see the doubts he was having. It also shows that creationist usage of such quotes by Patterson does not amount to ‘creationist foul play’.

Dr Patterson’s penchant for openness did not do him any service with the pro-evolutionary scientific establishment, who often expressed anger and dismay at his comments when they could not make excuses for them. His experience and expertise as holder of one of the most prestigious scientific posts in the world did not grant him immunity from pressure for having dared to express doubts about the evolutionary worldview. It is a sad reminder that political and ideological correctness can be more important than any so-called ‘objective facts’ in determining scientific acceptance of an idea.

15 Questions for Evolutionists -- #9 Why are the (expected) transitional fossils missing? 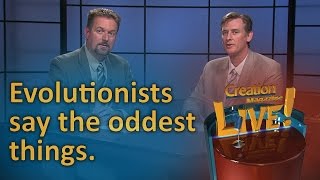