Many people don’t realize it, but Charles Darwin did not invent his evolutionary theory in a vacuum. Evolutionary ideas were circulating widely in his day. His own grandfather Erasmus Darwin believed so strongly in evolution that he emblazoned the Latin phrase E CONCHIS OMNIA (‘all from shells’) on the family coat of arms. Erasmus also wrote a book about evolution called Zoonomia. Even though it was written over a decade before his birth, young Charles later claimed to have read it so often that he had memorized entire passages. Clearly, Darwin did not invent evolutionary theory. He did not even invent the (false) idea that natural selection was the driving force behind evolution.

But evolutionary theory would be nothing without deep time. In fact, the idea that the earth was millions of years old was already deeply entrenched among scientific leaders long before Charles Darwin was born. It was geologists like Hutton and Lyell that gave him the time he required for his ‘slow and gradual’ thinking. This is the essence of evolutionary theory. They believe that, given enough time, even very slow changes might be able to explain their alleged common ancestry of all species. The idea that species change, the power of natural selection (or lack thereof), and the relationships among the species on earth have been discussed many, many times on this website and in CMI’s many publications, public talks, and videos. We have also given multiple biblical and scientific defenses for a young age of the earth and universe. The age of the earth is an important topic. Jesus affirmed a young earth, as did the Apostles and Bible writers like Peter, Paul, Luke, and John.

Time, it turns out, it the key to unravelling the strands of the creation-evolution debate.

Clearly there is a dichotomy here. Evolution requires deep time, but the Bible denies deep time. Time, it turns out, is the key to unravelling the strands of the creation-evolution debate. Without vast ages, evolution is impossible, and they know it. Let’s take some time to reverse-engineer Darwinian evolution by raising questions about deep time.

The source of deep time

Evolutionists apply logic selectively. In one sense, they do this without any historical sense. They believe in natural law, but ignore the fact that this very idea was derived from Christian theology. They appeal to rationality in the laboratory, but skip over the part in history where they would learn that it was the Christians who pioneered this method. After the modern scientific method was developed, however, the idea of naturalism came roaring in. This is a belief that all things in the universe can be explained by natural causes. Importantly, this does not only include the way things work (formerly called operational science) but how they came into existence as well (also known as historical science). Naturalism is powerful, for if true, there is no need for God at any point in the history of the universe.

If deep time does not exist, evolution is impossible. It’s just that simple.

This major philosophical shift picked up steam in the so-called Enlightenment of the mid-18th century. Strangely, this move toward secularism, humanism, and naturalism was driven by the philosophers like Kant, Hagel, Hume, etc., and not by the scientists, who were generally Christian in philosophy and by confession. But since naturalism ‘naturally’ leads to a belief in an ancient earth, scientists gradually went over into the deep-time camp.

Under naturalistic assumptions, if everything in the laboratory can be explained by natural causes, everything in nature could as well. But many things in the natural world would require millions, if not billions, of years to explain using nothing but natural processes, or at least they thought. At this point in history, the applied naturalism of the Christian worldview (trusting that God operates according to rules, i.e. that He is not capricious) had morphed into the methodological naturalism that underpins modern evolutionary science.

Hundreds of years after the Enlightenment, we know that naturalism has failed. There are many things it cannot explain, even given billions of years. There are things that simply cannot be explained by what we see happening today in the laboratory. For a long time, it looked like naturalism could explain everything. However, that has changed dramatically over the past several decades.

In the book and movie Evolution’s Achilles’ Heels, CMI scientists documented the utter failure of naturalism to explain multiple aspects of the natural world. We covered natural selection, genetics, the origin of life, the fossil record, the rock record, radiometric dating, big bang cosmology, and ethics. Each of these massive areas of study have specific places that defy naturalistic explanations.

If naturalistic “science” cannot explain so much scientific knowledge, clearly “science” should not be equated with naturalism. But if you take away naturalism, you open the door for theism in the sciences, which is a major taboo for the secular world. Thus, it should not surprise us that they fight so hard to stick to naturistic explanations, even when they fail.

There are many other ideas that contradict naturalism and its step child, deep time. We have documented these extensively over the previous four decades. Carbon-14 is one of those things. In fact, carbon dating is one of the best things to happen to the creation movement, for now that our machines have gotten sensitive enough, we have found no carbon sources on earth that contain zero carbon-14. This includes coal, oil, natural gas, amber, diamonds, and dinosaur bones…all forms of carbon everywhere in the fossil record have it. The half-life of carbon 14 is such that it simply cannot last millions of years, yet it is found at measurable levels in all forms of carbon throughout the fossil record. Thus, according to this area of operational science, the earth is young.

We can make other arguments for a young earth by considering the field of genetics. Mutations accumulate much too quickly in animal populations. And natural selection cannot remove them all. Thus, species cannot be millions of years old, or they would already be extinct. This is an example of using a combination of evolutionary theory and laboratory measurements to contradict evolutionary time.

The presence of “living fossils” is another area that argues in our favor. The only way for a species to stay the same in a variable environment is for that species to be young. Unchanged species for millions, even billions, of years is untenable in the evolutionary model. 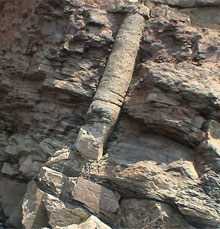 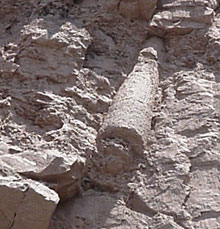 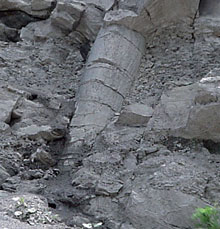 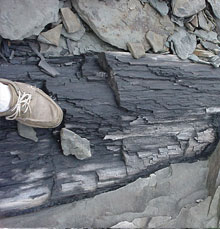 Polystrate fossils cut vertically through multiple layers in the geologic column, and defy evolutionary time. Many polystrate trees have been found across the world, but trees do not stick up from the ground for thousands of years after they die while they are slowly buried. Dead trees rot, burn, get eaten, fall down, etc. The presence of polystrate fossils says “no” to the evolutionary timeline.

Erosion rates are also a problem for deep time. At current rates, the entire continent of North America would be reduced to sea level in just a few million years. How can any landform, then, be older than that? And how could major geological features like Grand Canyon or the buttes and mesas of Monument Valley have retained sheer-sided cliffs when every erosional force known is acting to round off those cliffs?

There are many additional arguments, from multiple different areas of operational science, that defy deep time. Please spend some time on Creation.com and educate yourself. There is much to learn!

Cut the legs out from under Darwinian evolution

If deep time does not exist, evolution is impossible. It’s just that simple. Back in Darwin’s day, they made arguments about deep time that were based on a general lack of understanding about operational science. A century and a half later, everything has changed, for many of the unknowns (such as mutation rates and erosion rates) have been worked out. No longer can we appeal to “unknowns” (like Darwin did when admitting the general lack of transitional species in the fossil record) to explain what we see.

Since deep time is demonstrably false, there is no reason to reject biblical claims about the age of the earth. And once deep time goes away, so does evolution. We do not need to appeal to naturalism to explain the universe, the solar system, or life, and we want to encourage people to seek deeper and more meaningful answers to their questions about evolution, naturalism, and deep time. Creation.com is a great place to start!