If our continents were old, they would no longer be here.

The continents cannot be billions of years old because they would have eroded away long ago.

It was James Hutton, the Scottish physician-turned-geologist, who suggested in 1785 that the earth was immensely old. His famous assertion that there was ‘no vestige of a beginning, no prospect of an end’ paved the way for Darwin’s theory of evolution.1 Today most geologists take Hutton’s views for granted. Evolutionists generally accept that the continents formed at least 2.5 billion years ago.2 The published ages of parts of Australia are greater than 3.0 billion years. Much of the rest of the continent is said to be 3.0 to 0.5 billion years old (figure below).3 A similar story is told for other continents—the age of their basement rocks is in the billion-year range.

These ideas are found to be wholly unconvincing once we take a closer look. We find that there are many geological processes that indicate the continents are not as old as evolutionists say.4 One such problem for the old-age idea is erosion. The continents cannot be billions of years old because they would have eroded away long ago. There should be nothing left.

Water is the main culprit that dissolves many minerals, and loosens soil and rock from the landscape, transporting them to the ocean. Day after day, year after year, like an endless procession of freight trains, the rivers of the world cart tonnes of decomposed rock across the continents and dump it in the ocean. By comparison, the amount removed by winds, glaciers and ocean waves pounding the coastline is small.

Water can do its eroding work once it falls as rain. It collects into regions called drainage basins—areas easily identified on a topographic map. By sampling the mouth of the river, we can measure the volume of water discharged from the basin and the amount of sediment it carries. It is difficult to be exact because some sediment is rolled or pushed along the bottom of the river. ‘Bed load’, as it is called, is not easily observed. Sometimes an arbitrary allowance is included to account for it.

Another problem is how to handle rare catastrophic events. Although these can transport huge quantities of sediment in a very short time, they are almost impossible to measure. Bed load and catastrophe both transport more sediment than is measured directly.

Nevertheless, sedimentologists have researched many of the world’s rivers and calculated how fast the land is disappearing. The measurements show that some rivers are excavating their basins by more than 1,000 mm (39 inches) of height in 1,000 years, while others move only 1 mm (0.04 inches) in 1,000 years. The average height reduction for all the continents of the world is about 60 mm (2.4 inches) per 1,000 years, which equates to some 24 billion tonnes of sediment per year (Table 1).5 That is a lot of top dressing!

On the scale of one human life-span, these rates of erosion are low. But for those who say the continents are billions of years old, the rates are staggering. A height of 150 kilometres (93 miles) of continent would have eroded in 2.5 billion years. It defies common sense. If erosion had been going on for billions of years, no continents would remain on Earth.

This problem has been highlighted by a number of geologists who calculated that North America should have been levelled in 10 million years if erosion has continued at the average rate.6 This is a ridiculously short time compared with the supposed 2.5-billion-year age for the continents. To make matters worse, many rivers erode the height of their basins much faster than average (Table 1). Even at the slowest rate of 1 mm (0.04 inches) reduction in height per 1,000 years, the continents, with an average height of 623 metres (2,000 feet), should have vanished long ago.

These rates not only erode the idea of billion-year-old continents but also crumble the concept of ancient mountains. In general, mountainous regions with their steep slopes and deep valleys are eroded fastest. Erosion rates of 1,000-mm (39 inch) height reduction per 1,000 years are common in the alpine regions of Papua New Guinea, Mexico, and the Himalayas.7 One of the fastest recorded regional height reductions is 19,000 mm (750 inches) per 1,000 years from a volcano in Papua New Guinea.8 The Yellow River in China could flatten a plateau as high as Everest in 10 million years.9 The mountain ranges, such as the Caledonides of western Europe and the Appalachians of eastern North America are even harder to explain because they are not as high as Everest, yet are supposed to be several hundred million years old. If erosion has been going on for this long, these mountains should not exist.10

Erosion is also a problem for flat land surfaces that are considered very ancient. These surfaces extend over large areas yet show little or no sign of erosion. Furthermore, the surfaces have no evidence of having had any other layers on them. An example is Kangaroo Island (southern Australia) which is about 140 km (87 miles) long and 60 km (37 miles) wide. Its surface is said to be at least 160 million years old, based on the fossil content and radioactive dating. Yet it is extremely flat over most of its area.11 The land is virtually the same as when it was uplifted—erosion has hardly touched the exposed surface. How could it stay so flat for so long without being eroded by 160 million years of rain?

Table 1: Erosion rates of some major rivers of the world
Average lowering of the land surface within the drainage basin in mm (inches) per 1000 years.17

Looking for an out

Why do the continents and mountains still exist if they are being eroded so quickly? Why do so many landforms, claimed to be old, show no sign of erosion? The simple answer is that they are not as old as claimed, but ‘young’ like the Bible says. However, this is not philosophically acceptable to evolutionary geologists, so other explanations are sought—in vain.

For example, it is suggested that the mountains still exist because uplift is constantly replacing them from below.12 Consequently, the mountains would have been eroded and replaced many times over in 2.5 billion years. However, although uplift is occurring in mountainous areas, such a process of uplift and erosion could not go on for long without removing all the layers of sediments. We would therefore not expect to find any old sediment in mountainous areas if they had been eroded and replaced many times. Yet, surprisingly, sediments of all ages from young to old (by evolutionary dating methods) are preserved in mountainous regions. The idea of continual renewal by uplift does not solve the problem.

Another idea suggested to solve the problem is that the present rates of erosion being measured are abnormally high.13 According to this argument, erosion was much less in the past before humans interfered. Human activity, such as land clearing and farming is said to be why we are measuring such high rates at present. However, quantitative measurements on the effect of this human activity have found that erosion rates are increased only 2 to 2.5 times.14 For this explanation to solve the problem, the increase would need to be several hundred times greater. Once again, the explanation does not work.

It has also been suggested that the climate in the past was much drier (because less water would mean less erosion).15 However this idea goes against the evidence. The climate was actually wetter, as deduced from the abundance of lush vegetation in the fossil record.

The ‘slow and gradual’ story, suggested by the Scottish physician Hutton two hundred years ago, does not make sense. Old-earthers claim that the continents are over 2.5 billion years old, yet using their own assumptions, the continents should have eroded away in 10 million years. Note that this 10 million years is not the estimated age of the continents.16 Rather, it highlights the bankruptcy of uniformitarian ideas. Geologists who believe the Bible consider that the mountains and continents we have today were formed as a consequence of the Flood of Noah’s day. When the continents were uplifted at the end of the Flood, the incredible energy of the retreating floodwaters carved the landscape. Not a lot, geologically speaking, has happened in the 4,500 years since then. 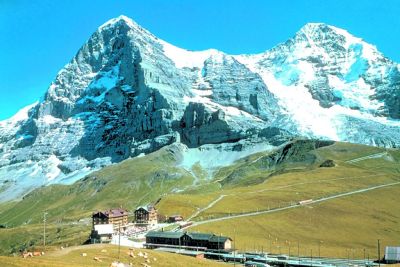 Mountains and the Flood

Uplift of continents and mountains, and deepening of ocean basins in the closing stages of the Flood, help to explain that the water which temporarily covered the whole earth (after mostly coming from subterranean sources—the ‘fountains of the great deep’) is now in the oceans. Here is where God has ‘set a bound that they may not pass over, so that they do not turn again to cover the earth’ (Psalm 104:9).

If the surface features of the earth were totally flattened out, water would cover the globe to a depth of 2.7 km (1.7 miles). That is still much less than the height of Mt Everest (some 8 km [5 miles]) and other Himalayan mountains.

However, the Flood waters did not have to be this deep in order to cover ‘all the high hills that were under the whole heaven’ of the pre-Flood earth (Genesis 7:19). The Himalayas show clear evidence of having been pushed up after layers of fossil-bearing Flood sediments had been deposited. Thus the ‘high hills’ (mountains) before the Flood were different from those we see today, and were probably not much higher than 2 km (1.3 miles). Much of this pre-Flood mountainous mass may have been eroded away during that year-long cataclysm.