What’s a billion years between friends?

The extinction of the dinosaurs is typically said to have been about 65 million years ago (mya),1 but 66 mya has also been suggested.2 During my dinosaur presentations I inform the audience, but I don’t amend my slides. After all, what’s a million years (in this case around 1.5%)?!

In other public talks, I discuss the big bang timeline, starting ~13.8 billion years ago. This is more than one billion years off from the age of the universe taught in the mid-nineteen nineties, of some 15 billion years (actually 8%).3 But what’s a billion years?!

The Bible’s timeline is unchanging (e.g. 1 Peter 1:25), like its Author; ‘Jesus Christ is the same yesterday and today and forever’ (Hebrews 13:8). The word of God reliably teaches a creation around 4,000 BC. Therefore, building your worldview on Scripture is a sure thing—your source does not keep changing. Not so with an evolutionary view, where new discoveries often seem to throw the prevailing (long age) view, for the timing of this or that aspect of history, under the proverbial bus. No need to worry though, for adherents can simply alter some previously believed interpretations in order to keep the narrative alive. Three recent examples of this are given below.

The team measured the age of sand in the burrows using unusual radioactive minerals. ‘The age turned out to be more than a billion years younger than the enclosing quartzite.’

1. How can a star be older than the universe?

You wouldn’t be the first to ask this question. ‘Methuselah’—or more technically HD 140283—is one of the oldest known stars. Actually, it was first thought to be 16 billion years old, which would be even more outrageous. Uncertainties existed regarding the distance of the star (from Earth), the theoretical modelling (nuclear core reactions, element diffusion), and the amount of oxygen present (in relation to iron). Taking these factors into account, the scientists managed to reduce the age by about 1.5 billion years. Further study reduced the age of HD 140283 to 14.27 billion years.

“The conclusion reached was that the age is about 14 billion years and, again, if one includes all sources of uncertainty—both in the observational measurements and the theoretical modelling—the error is about 700 or 800 million years, so there is no conflict because 13.8 billion years lies within the star’s error bar.”4

So with error bars of over 5% it was well within the age of the universe. Phew! This dating problem used to be worse in the past, when stars were estimated to be 18 or even 20 billions of years old; now we know better!

But do we? Voices have been raised, through measurements with the European Planck space telescope, that the universe might only be 11.4 billion years old. If they keep moving the goalposts like that, it will be hard to keep a score on the stars:

“The most likely explanations for the paradox are some overlooked observational effect and/or something big missing from our understanding of the dynamics of the cosmic expansion.”4

“Something big missing”? It sounds more like an own-goal. If the age of the universe were to be changed (again), it would have a serious knock-on effect for many other ages, for instance those of stars.

According to Scripture (God’s perfect revelation to mankind), however, the stars are three days younger than space itself (Genesis 1:1,4,16,19).

Shaving for men is usually associated with removing the stubble that’s a day (or a few days) old. When we shave off a bit of a material, it generally means a small portion. Here we will discuss the question of shaving off a billion years for the age of the youngest known rock from the moon, so we are talking about a much greater percentage.

This ties in with remote images of the moon taken over the past few years; the entry ‘moon’ on Wikipedia lists at least six references to papers (published 7–8 years earlier) with even more recent (~100 mya) volcanic activity.7

We should ask where the heat comes from to form outpourings of molten basalt rock three billion, two billion, and 100 million years ago? The moon is cold and inert today, and was assumed to have been like that for a very long time. Remember, even at the new date of two billion years old, this would still be 2.5 billion years after the moon’s alleged formation. What geologic activity could have taken place to form these rocks, and what caused it?8 The authors claim the findings “rewrote lunar geological history”.6 They didn’t really. As stated above, numerous articles on the same topic have been published already. The main difference is that they now have some real rocks to analyse. “Ultimately, this will help us improve age dating of the entire Solar system, unlocking more secrets from our cosmic neighbourhood”,6 the authors said, in a sense admitting that they really don’t know.

Again, according to God’s Word, the moon rocks are just three days younger than those of the Earth and the universe, created just over 6,000 years ago.

We have looked at a number of things in space that have changed age quite radically. What about nearer to home, here on planet Earth? Let’s look at a mystery reported by Science Daily, that has kept geologist baffled for five decades.9

Animal traces were found in 1.2 billion year old quartzite rocks. “Quartzite is as hard as concrete and impossible for burrowing animals to penetrate”, according to the report.9

The quartzite rock is metamorphosed sandstone; in this case the sand was first laid down allegedly 1.7 billion years ago. So, any burrowing would have to have been done in a 500 million year time window, and more likely towards the very beginning (when it was still sandy and hadn’t become hard quartzite). Here’s the problem: animals cannot travel in time, and “the oldest animal fossils, […] are less than 0.6 billion years old”. 9

This conundrum is easier resolved than you might think. How? Maybe try to make the rock younger! So, it is no surprise to read:

“A Swedish-Australian-Chinese-American team has now offered a solution to this riddle. The team measured the age of sand in the burrows using unusual radioactive minerals. ‘The age turned out to be more than a billion years younger than the enclosing quartzite’”.9

In other words, the material in the burrows (‘holes’ in the quartzite) was in the order of only 200 million years old, ‘young’ enough on the evolutionary timescale for animals to have been around. Perhaps anticipating your next question, which the authors of the study deal with, it is worth quoting at length what the article says:

“But how can animals burrow through hard quartzite? The answer was given by microscopic investigations, which showed that the grains had first separated at contact surfaces, resulting in a friable [crumbly, fragile] matrix, and then been fused again through later deposition of quartz, returning the rock to the state of hard quartzite. A window in time had thus been opened to enable burrowing, the researchers report. Through comparisons with surrounding sedimentary strata, the scientists could date this window to about 40 million years ago, during the Eocene epoch of Earth’s history.”9

What if the billions of years never existed? Such notions are never discussed, not even between friends …

Notice the ‘cunning’ of the team to once and for all get rid of this timing problem, by ‘killing two birds with one stone’. Just how quartzite might have become friable for a period of time, before solidifying again is not explained; without a viable scientific explanation for this idea, it is nothing more than wishful thinking.

A much more likely explanation is that both the quartzite as well as the animals are nowhere near the ages assigned to them. Instead, the sand was deposited rapidly during Noah’s Flood (~4,400 years ago) and animals alive at that time could have easily burrowed into it, before this sandstone quickly metamorphosed into quartzite.

In all three of these examples, we have seen how dating discrepancies of a billion years or more are dismissed by various rescue devices. Rescue devices to prop up the evolutionary narrative with its long ages. Just about anything goes, apart from one thing: they (wilfully) ignore the elephant in the room; that is, what if the billions of years never existed? But such notions are never discussed, not even between friends … 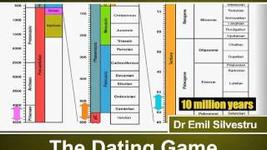