What’s in an Egg?

Imagine a container filled with amorphous-looking bits of metal, plastic and some software chips. Could you imagine it breaking out as a fully-assembled scale model motor car? Then growing larger as it absorbs raw materials, as well as energy, from its surroundings? What sort of advanced software engineering would be required? As for any ideas of it being able to ‘marry’ another like itself, thus repeating the whole cycle by producing another container of metal, plastic and software … such notions could rightly be dismissed as ludicrously far-fetched, even in our technologically advanced age. Yet in the world around us, similar things are happening all the time in those shell-wrapped marvels-in-miniature called eggs.

From egg to chicken

Chicken eggs are laid only about 25 hours after ovulation (i.e. release of the egg from the hen’s ovary). Breaking open the shell of a freshly-laid fertilized egg would reveal a tiny (2 mm, or 1/12 inch, in diameter) white mass of cells—the blastodisc—on top of the yolk.1 If an intact egg is kept warm under a broody hen or in an incubator, the chick will develop from these blastodisc cells, with body folds of the embryo beginning to separate from the underlying yolk.

Crucial to embryo development is the formation of various membranes (partitions) including the yolk sac, amnion and allantois. The amnion encloses the embryo inside a fluid-filled cavity which not only buffers the embryo against short-term external temperature extremes but also cushions it if the egg is bumped. With the embryo closed off from the outside world by the shell,2 there is the problem of how to dispose of excretory wastes. Here is where the allantois is so crucial, as it serves as the embryo’s garbage bag. (When the chick hatches, the accumulated wastes can be found sticking to the inside of the abandoned shell.)

While these membranes are forming, the embryo itself continues to develop, differentiating the various organ systems. Four days after an egg is laid, the heart is visible and large blood vessels can be seen to have grown out from the embryo into the yolk sac. By eight days the eyes, darkly pigmented, are prominent. On the 11th day the brain is visible through the transparent skull, the limbs are obviously developing, and feathers appear by the 14th day. By 21 days (i.e. just before hatching), the ‘egg tooth’ is visible—the knob on the end of the beak which the chick uses to break out of the shell.

All the instructions for a chicken were present in the original tiny blastodisc inside the egg.

Newly hatched chicks weighing around 40 g (1.4 oz) are now ready to find food for themselves. In favourable conditions they can grow extremely rapidly, attaining weights of 2.6 kg (5.7 lb) in around six weeks.3

All the instructions for a chicken this size were present in the original tiny blastodisc inside the egg. Could the egg, its contents of such intricate construction, wrapped in a seamless protective shell and programmed to grow, possibly have originated by evolutionary ‘chance and necessity’? The improbability of an egg, outside the context of a Creator God, simply defies reason (Romans 1:20).

Which came first? The chicken or the egg?

Evolutionists would reason as follows. A chicken comes only from a chicken egg. But in the past, they say, there must have been something almost like a chicken (but not quite) which gave rise to the first chicken, by mutation (random genetic copying mistakes). Given Mendel’s laws of inheritance, the transition from non-chicken to chicken can only take place between the egg-layer and the egg. Thus, they say, the egg came first.1,2

The bottom line is that it was the chicken that came first, before its egg.

Let’s ignore here that their whole scheme relies on the belief that massive amounts of new information have to be added to convert a primordial fish into a chicken (no mutation has ever been observed that adds information to the DNA—just the opposite).3 What does the Bible say concerning the age-old question about the chicken and the egg?

According to Genesis 1, God created all the animals and birds, each ‘after their own kind’, and then instructed that they were to be fruitful, and multiply, and increase on the Earth.

So God designed and made the ‘chicken kind’ (male and female), and later, the very first ‘chicken egg’ was laid. To the extent that that first chicken population differed from today’s chickens, it would have been genetically richer, capable of giving rise to a wide variety within that particular kind. But the bottom line is that it was the chicken that came first, before its egg.

In biology, the term ‘egg’ most often refers to the female sex cell, or gamete, across a multitude of species, from rabbits to redwood trees, camels to corn plants.

However, ‘egg’ can also be used to describe the entire specialized structure or capsule that consists of the ovum, its various protective membranes, and any accompanying nutritive materials. Thus, for most people, an egg is a hard-shelled reproductive body (normally regarded as food) that is produced by a bird or reptile.

But it’s not just bird or turtle eggs that are considered as food. Fish eggs (‘roe’) are eagerly consumed by many around the world. In Russia, caviar—the salted eggs of sturgeonfish—is a prized delicacy.1

All birds, and some reptiles and fish, are oviparous—their eggs continue to develop after being laid, and hatch later. Some reptiles (e.g. Garter Snakes) and fish (e.g. guppies) are ovoviviparous—i.e. they have shelled eggs that hatch as they are laid, making it look like ‘live birth’. However (unlike the situation in viviparous organisms giving birth to live young—e.g. sheep), after ovulation, the mother’s body supplies no nutrients—only oxygen—to the developing embryo, which thus develops on the energy in the yolk. 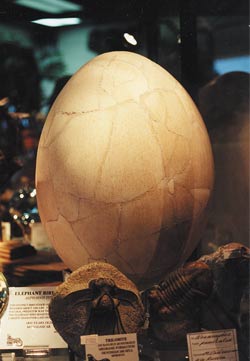