Uniformitarian scientists derive many more ‘annual layers’ in the Greenland ice cores than creationists because of their assumed old age time scale. The differences between the two paradigms also show up in the interpretation of the Ice Age portion of the cores. Large changes in oxygen isotope ratio are interpreted by uniformitarian scientists as wild fluctuations in temperature in the North Atlantic region. Such wild fluctuations in the previous ‘interglacial’ sparked a reinforcement syndrome and other such fluctuations were then ‘discovered’ in other data sets, such as deep-sea cores. These ‘interglacial’ fluctuations have been used to justify speculation on rapid climate change in the present climate due to increased greenhouse gasses. The ‘interglacial’ ice core fluctuations are now seen by most scientists as an artifact of ice flow. Uniformitarian scientists are still perplexed over the huge Ice Age fluctuations. Creationists, on the other hand, can interpret the oxygen isotope swings in at least four ways by events within a short post-Flood Ice Age. The oxygen isotope fluctuations could represent seasonal changes, longer period climate changes caused by variable volcanic dust loading, changes in sea ice, or atmospheric circulation changes.

In a Countering the Critics article in the previous TJ,1 I compared the uniformitarian and creationist interpretations of new ice core data from the Greenland Ice Sheet. These ice cores are the European GRIP core and the American GISP2 core both drilled at the highest part of the ice sheet. Uniformitarian scientists assume the ice sheet has been more-or-less in equilibrium for several million years. Thus the ice sheet would be gaining as much ice and snow from precipitation as it loses by melting and calving of icebergs into the ocean. Based on these assumptions, they ferret out 110,000 ‘annual’ layers, the main subject of my other article.1

Before deriving supposed annual layers, the ice core was dated by flow modeling in which two points on the core were calibrated to certain fluctuations in deep sea cores. One of these points is the Younger Dryas (YD) fluctuation, shown in Figure 1. The second point is stage 5d in deep sea cores. Keigwin et al. state:

‘The ice-core chronology was discussed by Dansgaard et al. and is pinned to the deep-sea chronology at the 110-kyr level [stage 5d], denoted by the solid vertical line [in their Figure 2].’2

Figure 1. The oxygen isotope ratio down the GRIP ice core, central Greenland (from Wolff et al.).5 Within the uniformitarian interpretation, Holocene represents the last 10,000 years or so, YD is the Younger Dryas cold period, A/B is the Allerod/Bolling warm period, 5a–d is the early part of the last ice age, and ‘Eem’ represents the previous interglacial. In the creationist interpretation, the Holocene would represent the post-Ice-Age climate during the past 4,000 years (approximately 1,500 m of ice), while the rapid post-Flood Ice Age would include the whole core below 1,500 m depth. Notice the high amplitude sharp oscillations in the oxygen isotope ratio in the glacial part of the core.

Furthermore, the deep-sea cores are calibrated to the astronomical theory of the Ice Age based on cyclical Earth orbital parameters. These cyclical variations are supposed to cause glacial and interglacial oscillations over the past 2.5 million years of geological time. In discussing the thorium dating technique for deep-sea cores, Scott Lehman3 points out: ‘Their technique is still heavily reliant on the accuracy of the orbitally derived mile posts.’ This is another example of massaging various data sets to make them seem consistent.4

On the other hand, creationists base their interpretation of the Greenland ice cores on a rapid, 700-year-long, post-Flood Ice Age followed by the present climate. In this model annual layers would be much thicker in the Ice Age portion of the ice sheet, and the claimed uniformitarian annual layers would be subannual, even picking up individual storms. Figure 3 in my Countering the Critics article1 contrasts the difference in annual layer thicknesses down the core in the two models.

Wild interpretations of the high-amplitude fluctuations

The wild Ice Age fluctuations reveal serious problems with the uniformitarian interpretation. Because of the rapid changes in oxygen isotope ratios, uniformitarian scientists now are forced to believe that the temperature on Greenland changed up to 20°C in periods as short as 1 to 3 years!8 This is a radical interpretation, but they are forced to accept it anyway, because of their assumptions. Since these changes are believed to represent the climate around the North Atlantic Ocean,9 wild back-and-forth climate fluctuations are assumed for this area. What kind of processes could possibly account for such radical changes, even during the Ice Age? The scientists are desperately searching for some sort of mechanism that would cause such catastrophic climate changes. The fluctuations are more an indication that the uniformitarian interpretation is faulty.

It is interesting that the previous Eem interglacial part of the core, according to the uniformitarian interpretation, also has very rapid changes in oxygen isotope ratios (Figure 1). This was interpreted as catastrophic climate changes during an interglacial period.10 Rapid ‘climate’ fluctuations were then ‘discovered’ in deep sea cores and lake pollen data that are correlated to this period.11 However, this part of the GRIP core was later compared to the GISP2 core and claimed to be an artifact of ice-flow disturbance.3 It is of further interest that some of the original claims of catastrophic climate change in other data sets are now ‘questionable.’3 However, the rapid fluctuations now postulated in the Ice Age portion of other data sets still stand. Sarnthein et al. state:

‘Since these first discoveries from the Greenland Summit cores in the early 1990s, the record of this unexpected climatic behavior has been found in many regions, including polar ice sheets; marine sediments of the Atlantic, Pacific, and Indian Oceans; and in terrestrial lakes and bogs.’12

This sudden discovery of radical climatic fluctuations in other data sets and their equally sudden questionable nature for the previous ‘interglacial’ seems to be another example of the ubiquitous reinforcement syndrome.13 It seems that the uniformitarian view is most accommodating to radically different interpretations.

Regardless of the interpretation of the very bottom of the core, a large number of articles have appeared suggesting that if such fluctuations can occur during the Ice Age, or even during the interglacial, that it can occur during the present climate. Many suggest that global warming will perturb the climate system so much as to even initiate an Ice Age. Kendrick Taylor asks:

‘New evidence shows that earth’s climate can change dramatically in only a decade. Could greenhouse gases flip that switch?’14

William Calvin in a popular article is even more dire:

‘But warming could lead, paradoxically, to drastic cooling—a catastrophe that could threaten the survival of civilization.’15

So, a warming climate can lead to a drastically cooler climate, according to uniformitarian thinking.

The main mechanism proposed for such radical climate change, past and future, is the stopping of the Atlantic Ocean circulation so that warm water is not transported northward to Greenland and Europe.16 This mechanism, initiated by an increase of man-made CO2, seems far-fetched.

These rapid fluctuations in oxygen isotopes are difficult to explain within the uniformitarian model. Sarnthein et al. admit: ‘The origin of major rapid, decadal climate change during the latest Quaternary remains an enigma.’17 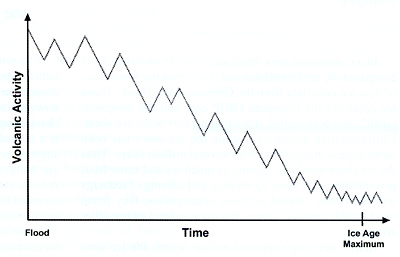 Figure 2. Postulated post-Flood volcanism up to glacial maximum (from Oard).22

How would creationists interpret the large-amplitude fluctuations during the Ice Age portion of the core? Since annual layers are much thicker in the creationist model, it is possible that the high amplitude oxygen isotope fluctuations are annual layers. However, some of the fluctuations would have lasted more than a year, since some of them are about 50 m thick. A second possibility is that these longer-lasting fluctuations could reflect variable volcanic dust and aerosol loads in the stratosphere. Figure 2 presents the postulated post-Flood volcanism up until glacial maximum.18 Notice the see-saw tendency superimposed on a gradual decline. During higher volcanism (the peaks), temperatures would be colder for a number of years. This could correspond to the more negative oxygen isotope values from the Greenland ice cores. Warmer periods would be caused by a thinning of volcanic dust and aerosols in the stratosphere.

A third possibility is that changes in sea ice, which affect the oxygen isotope ratios, could cause the fluctuations.19 A higher amount of sea ice will cause more negative oxygen isotope ratios and vice versa. I see this process operating late in the Ice Age, since it would take quite a while for the warm ocean after the Genesis Flood to cool enough for sea ice to form.20 But this mechanism could be responsible for the late Ice Age Younger Dryas and Allerod/Bolling fluctuations.

A fourth possibility is that the wild fluctuations reflect a changing atmospheric circulation, likely related and reinforced by any of the above three mechanisms. This is because temperature is only one variable out of many that affect the oxygen isotope ratios.21 Uniformitarian scientists usually interpret the oxygen isotope ratios mainly in terms of temperature fluctuations.

The wild oscillations in the oxygen isotope ratio during the Ice Age is interpreted by uniformitarian scientists as catastrophic changes in temperature in the North Atlantic region. These are used to justify speculation on rapid climate change in the present climate due to increased greenhouse gasses. It is the uniformitarian stretched-out time scale that is the main cause of the problem. Within a creationist model,1 the large fluctuations can be explained by events during the Ice Age. With much thicker annual layers in the Ice Age portion of the core, the oscillations could simply be annual layers caused by seasonal changes in temperature or more prolonged changes in temperature caused by variable volcanic dust loading in the stratosphere.

Interpretation of ice cores is another example where different assumptions, using the very same data, result in quite different conclusions.