Will the world end on 23 September?

How to think about doomsday scenarios

From time to time, sensational claims hit the media that the world will end, or the Rapture will come, because of some supposed coming event. Now CMI is not an end-times ministry, for reasons stated in End-times and Early-times, so what follows is not specific to any eschatological view. In general, one wonders what part of the following words of Jesus are so hard to understand:

But concerning that day and hour no one knows, not even the angels of heaven, nor the Son, but the Father only (Matthew 24:36).

But apparently these soi-disant prophets know better than Jesus, God the Son and the Incarnate Word (and see Hypostatic Union: Did Jesus know when he was coming back?). Added to that hubris is usually a basic ignorance of astronomy.

In past articles, we have addressed questions such as Will Nibiru collide with Earth?, Will comet Elenin destroy us? And: What about the planets lining up in the sky?, and 2012 Mayan doomsday predictions: Much to do about nothing? One would think that the doomsayers would give up …

A tetrad of blood moons?

In 2013, John Hagee wrote a sensationalist book, Four Blood Moons: Something is About to Change. A couple of things were allegedly unusual.

First, astronomers define a lunar tetrad as four successive total lunar eclipses within two years, with no partial eclipses in between (a lunar eclipse occurs when the earth blocks the sun—the curved shadow in classical times was known evidence for a spherical earth). But there have been 62 tetrads since Jesus’ birth.

But concerning that day and hour no one knows, not even the angels of heaven, nor the Son, but the Father only (Jesus, Matthew 24:36).

Second, the moon would ‘turn to blood’, supposedly a reference to Joel 2:31:

The sun shall be turned to darkness, and the moon to blood, before the great and awesome day of the Lord comes.

However, although explaining what this verse means is outside the scope of our ministry, it does seem to be a relatively common and temporary natural phenomenon.

The moon turning red during a total lunar eclipse is well known, and a natural physical phenomenon. The earth itself blocks the sun’s light, but some light is bent through the atmosphere and reaches the moon. But blue light is scattered away, leaving red light to shine on the moon.

Similarly, the sun darkening is probably not a total solar eclipse, like one due in many parts of the USA on 21 August. This happens when the moon blocks the sun in an almost perfect fit, because by an amazing coincidence, the sun is both ~400 times larger and ~400 times more distant.

So what actually happened after the fourth ‘blood moon’? Nothing memorable of course.

The sun in Virgo?

On 23 September, there is supposed to be a sign that matches Revelation 12:1–2:

There is no indication that the writer of Revelation had the constellation Virgo in mind. So we don’t agree with ‘Gospel in the stars’ ideas for that reason, also because of its implicit denial of the sufficiency of Scripture.

And a great sign appeared in heaven: a woman clothed with the sun, with the moon under her feet, and on her head a crown of twelve stars. She was pregnant and was crying out in birth pains and the agony of giving birth.

So what would the woman be? Apparently Virgo, the virgin, the second-largest constellation by area in the sky (after Hydra). However, there is no historical relation between the constellation and the virgin Mary or any other biblical woman until the Middle Ages. Long before that time, the Greeks and Romans mostly identified the constellation with Demeter/Ceres, the goddess of harvest. Other candidates include the Roman virgin goddess of justice, Justitia; or the Greek virgin goddess of purity, Astraea. So there is no indication that the writer of Revelation had this constellation in mind. So we don’t agree with ‘Gospel in the stars’ ideas for that reason, also because of its implicit denial of the sufficiency of Scripture.

The above should be enough to exercise proper biblical discernment, but what about other claims? First, the sun will be in Virgo. But since Virgo is part of the Zodiac, this happens once per year by definition—the sun spends about a month ‘in’ each of the 12 signs! The Zodiac is the sky around the ecliptic, the apparent path the sun traces in the sky, or under the correct geokinetic model, the plane of the earth’s orbit around the sun.

Another supposed sign is the moon at the ‘feet’ of Virgo. But since the moon orbits the earth once per month, and the sun ‘stays’ a month ‘in’ each it’s not surprising that one or two days every year, both the sun and moon will be ‘in’ Virgo.

Yet another sign is supposed to be the largest planet, Jupiter, ‘in’ Virgo. Supposedly Jupiter is to represent the Messiah, the King of Kings, although historically Jupiter was the pagan Roman king of the gods; the equivalent of the Greek Zeus. Also, since Jupiter orbits the sun every 12 years, it spends a year ‘in’ each sign. Therefore at 12-year intervals, the sun, moon, and Jupiter will all be in Virgo—2005, 1993, 1971 …. But there was no YouTube to sensationalize the claims until 2005.

How rare is this planetary coincidence? Certainly once-in-a-lifetime, but not as rare as the sensationalists claim. It has happened four times before in the last millennium: 1827, 1483, 1293, and 1056.

Still another ‘sign’ involves the constellation Leo. This has several bright stars, so is quite prominent. Some claim that this is a sign of “the Lion of the tribe of Judah” who is also a Lamb (Revelation 5:5–6, cf. Genesis 49:9–10). But historically, Leo was a bad thing: the vicious Nemean Lion with its skin that arrows and spears couldn’t penetrate. Slaying this beast was the first of the “12 Labours of Heracles/Hercules”. This is the sign preceding Virgo in the Zodiac, and is above the ‘head’ of the ‘virgin’ so the sun will always go through Leo before it passes through Virgo.

Supposedly the clincher is three planets also in Leo: Mercury, Venus, and Mars. The word ‘planet’ comes from the Greek astēr planētēs (αστήρ πλανήτης) meaning ‘wandering star’, so these three ‘stars’ added to the nine of Leo make 12 of a ‘crown’. Point proven? Not really. Because the constellations are man-made groupings (invented by pagans!), the number of stars is not definite. The claimed nine are the brightest that make the outline of the lion. But some depictions have extra stars, e.g. omicron Leonis, rho Leonis, and sigma Leonis to make three of the lion’s feet. So as usual with any astrology (or Christian adaptations of it), one cherry-picks the stars that fit the desired conclusion.

Also, how rare is this planetary coincidence? Certainly once-in-a-lifetime, but not as rare as the sensationalists claim. It has happened four times before in the last millennium: the Septembers of 1827, 1483, 1293, and 1056.1 One might find momentous happenings at those time if you research carefully, but none are connected to biblical prophecy: unless you seriously believe the Mormonism founder Joseph Smith’s claim (made 11 years after the ‘fact’) that he found the magic golden plates on 22 September 1827 after being led to them by the angel Moroni. And even this cult leader didn’t make any astrological claims about Virgo.

There is nothing to suggest that 23 September is a momentous date for biblical prophecy, and Christians need to be careful about being drawn into such sensationalist claims. Also, the world won’t end in a ‘heat death’ (total thermodynamic equilibrium) as evolutionists predict. Rather, as pointed out at the beginning, we won’t know the day or the hour—so we should be prepared at all times! 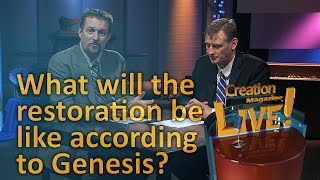 The Genesis Account
by Jonathan Sarfati
US $30.00
Hard Cover
Alien Intrusion
by Gary Bates
US $16.00
Soft Cover
From Creation to Salvation
by Lita Cosner Sanders
US $14.00
Soft Cover
Creation Restored
US $10.00
DVD