Would you trust a dingo?

When Lindy Chamberlain, the wife of a pastor, told authorities in 1980 that a dingo had taken her baby Azaria from their tent at Ayers Rock (Uluru) in central Australia, the tragedy quickly became the focus of national attention.

Sadly, the Australian public was more inclined to place faith in the (imagined good) character of a wild dog than in the word of a pastor’s wife. People wore T-shirts emblazoned with the slogan, ‘The dingo is innocent.’

To find out about the true character of dingoes and how they came to Australia, read the ‘sneak peek’ article on dingoes from the March 2005 Creation magazine.

This issue also includes ‘Darwin’s impact: The bloodstained legacy of evolution,’ an eye-opening article recounting the horrific consequences when ideals consistent with evolutionary thought are put into full practice. Yet ‘armchair’ evolutionist academics are trying to ‘repackage’ evolutionism, forgetting the past and shrugging off its evil implications.

Other features in this issue include:

Get the grey matter going!

We live in a skeptical age. So isn’t it ironic that although most people believe evolution to be true, often they know very little about it? Sadly so many just believe what they’ve been told. 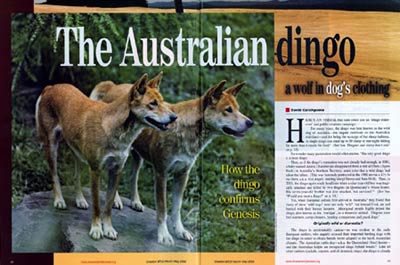 That’s where Creation magazine comes in. To those who have never heard the truth, reading Creation magazine for the first time can be a ‘mind-blowing’ experience. Subscriber Stuart G. said, ‘Creation magazine ... [has] given me more confidence to battle against evolution and to counter its hold on those who accept it blindly with no evidence to support it.’

Want an easy, family-friendly way to keep up with the latest developments in understanding God’s world from a biblical and scientific perspective? Then subscribing to Creation is the easy solution. Want an evangelistic opportunity? Order extra copies of back issues to pass around to your friends, family or coworkers, or get them a gift subscription. Want to deliver the message that the Bible can be trusted to thousands in your local school or public library? Purchase a specially priced library subscription—(contact us). Don’t keep all this good information to yourself!

Every day, everywhere around the world, people are being set free by the knowledge that there is a Creator. Join the thousands worldwide who are having their faith strengthened, keeping their minds sharp, and sharing their faith with Creation magazine.