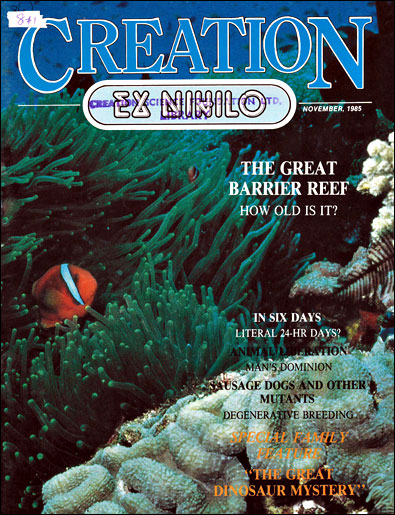 by Peter Read and Andrew Snelling

How many of us think it takes tens, or even hundreds of thousands of years for large coral reefs, such as Australia’s Great Barrier Reef, to grow? This is largely because we have been subtly indoctrinated with the evolutionist’s view of earth history and its eons of time, and not because of any evidence shown to us. But how old is the Great Barrier Reef? What is the evidence? If today’s coral reefs grew on the present land surface only after Noah’s Flood, they would surely have to be less than 4,400 years old. Recent research indicates this is not just wishful creationist thinking, it is highly probable!

At the Australian Institute of Marine Science (A.I.M.S.), Cape Ferguson, 50 km south of Townsville, Queensland, a connection has been found between the rates at which the corals grow and the seasonal high freshwater runoff or floods from nearby land. This fascinating discovery was made after a drilling rig had been set up on the small Pandora Reef, off the coast of Queensland near the mouth of the Burdekin River. The Pandora Reef is a part of the Great Barrier Reef. Researchers drilled into the structural part of this reef to a depth of 10 metres, and recovered complete drill-core records of the growth of the coral colonies that make up the reef. This drill core was analysed and scientist Peter Isdale of A.I.M.S. reported his findings in the journal Nature.1 When the drill core was placed under ultraviolet light, he observed a remarkable phenomenon—the coral displayed bright bands of yellow-green fluorescence in an irregular pattern-of varying intensities. The frequency and intensities of these fluorescent bands were continuously measured down the whole vertical depth (1.8m) of one coral colony and then recorded in graphical form. This record of the coral’s fluorescent bands was then compared with records of flooding from the nearby Burdekin River, and it showed a near perfect correlation (see Figure 1).

This correlation between the deposition of fluorescent material in the coral skeleton and the outflow of the Burdekin River was so pronounced that the fluorescent bands were found to record high river water flows even down to the level of brief events, as was demonstrated by different fluorescent bands showing the February and April floods of the 1958 wet season (Figure 1). It was evident that increased river flow during floods strongly influences the coral growth. It affected not only seasonal but annual rates of growth. The resulting bands produced in the coral are not unlike tree rings, with denser fluorescent bands formed during periods of high freshwater runoff. Indeed, this confirms other studies which have shown that the density of corals varies with the season. The highest densities in the coral skeletons are formed in the summer months, the same months in which rivers like the Burdekin River flood.

The whole 10 metre thickness of coral that makes up Pandora Reef would have taken only about 660 years to grow.

On correlating the historically recorded Burdekin River outflow measurements and the fluorescent bands in the drill core of Pandora Reef coral, it was found that 1.8 metres of coral had taken only 118 years to grow! This was also confirmed by crosschecking the corals under X-rays, a method that is proving to give a very good record of coral growth. The average growth rate of these Pandora Reef corals was found to be 15.3 mm per year, a figure which compares well with previously measured growth rates of between 5 mm and 25 mm per year for massive coral colonies elsewhere on the Great Barrier Reef.

This new information immediately suggests a method for finding how old the reefs are which are made up by these banded corals. A reef will only grow as quickly as the corals that form the reef. This banding method would thus appear to give a reasonable guide to not only the age of Pandora Reef, but the age of all such reefs that make up the Great Barrier Reef, Australia’s world-class natural wonder.

So how old is the Great Barrier Reef on this basis? Pandora Reef is approximately 10 metres in thickness; 1.8 metres of this coral has grown in the last 118 years. On this basis the whole 10 metre thickness of coral that makes up this reef would have taken only about 660 years to grow! Now this coral growth rate of just over 15 mm per year at Pandora Reef is in the middle of the range of measured growth (5 mm to 25mm per year) for corals elsewhere on the Great Barrier Reef, so it would appear to be an obvious ‘average’ choice to use in our next calculation. The outer ‘barrier’ reefs, that is, the reefs furthest from the coast and in the deepest water, rise from the sea floor at the edge of the continental shelf to the ocean surface, a total water depth of 30 fathoms. This means that the reefs are about 180 feet or 55 metres thick—a staggering amount of coral! But on a basis of 15 mm growth per year, these reefs may be less than 3,700 years old. These are the thickest reefs in the Great Barrier Reef chain of reefs, and they would therefore also appear to be the oldest. The Great Barrier Reef is probably less than 3,700 years old. Had Abraham sailed to Australia during his lifetime, there would have been no Great Barrier Reef for him to see!