Dr Carter obtained a BS in Applied Biology from the Georgia Institute of Technology in 1992. He then spent four years teaching high school biology, chemistry, physics and electronics before going to the University of Miami to obtain his PhD in Marine Biology. He successfully completed this program in 2003 with a dissertation on “Cnidarian Fluorescent Proteins”. While in Miami, he studied the genetics of pigmentation in corals and other invertebrates, designed and built an aquaculture facility for Caribbean corals, performed well over 500 SCUBA dives, and licensed a spin-off product of his research (a patented fluorescent protein) to a biotech company. Since 2006, Rob has been a speaker and writer with CMI-US, while also researching genetics with Dr John Sanford (see Creation 30(4):45–47, 2008).

Dr Carter has had a varied career in science, including both teaching and research. In fact, Rob says that he was almost born into it; he was interested in science from an early age and was clearly gifted in it more than in other subjects.

At university, Dr Carter researched corals. He describes them as “amazing,” and explains:

“They live in every ocean, from the surface to at least 2,000 meters (1.2 miles).1 Some have skeletons; some do not. Most of those living in clear, warm, shallow water have algae living inside them. So they are both fierce, carnivorous predators (at least to the little critters that happen to be swept into their tentacles), and photosynthetic—they can make food from light energy, water and carbon dioxide, like plants.”

He researched one particularly interesting feature—fluorescence, whereby almost every coral species will glow green, orange or red under blue or ultraviolet light. Amazingly, even deep water species living in total darkness have a set of fluorescent proteins.

This led to Dr Carter’s second major interest: genetics. Several people asked him what caused the glowing fluorescent colours. To find out, he, with the help of a friend and mentor, was able to clone the gene that coded for one of the fluorescent proteins in one particular coral species.2

“After that, I started working in earnest and managed to not only clone the genes from several species, but also of several colours. We increased the brightness of several of these proteins by manipulating their DNA code and marketed one of them to a biotech company.”

This experience gave Dr Carter all the tools and training he needed to study the genetics of any organism, since they all contain DNA. To start studying human genetics, for example, he only had to “download the human genome and start plugging away.”

Dr Carter has published one particularly important paper in a secular journal on human mitochondrial DNA.3 Rob explains, “This is a little circlet of DNA that is found in sub-cellular compartments called mitochondria. These little factories turn sugar into energy and are only inherited from your mother (according to theory and many experiments). Working with mitochondrial DNA, we can build a family tree of every person in the world, going through the female lineages only.”

What does this show? Dr Carter explains that evolutionary models have large populations of humans evolving on the plains of Africa over several million years:

“Evolutionists expected modern humans to be descended from many female lineages. When they only found one, they invoked a ‘population bottleneck’ as an explanation. That is, the number of people living in Africa supposedly shrank sharply to as few as 1,000–10,000 people—and we only just escaped becoming extinct. They reason that, while many females lived during this bottleneck period, only one lineage persisted, with the others going extinct through random chance.4 The parallels to the Bible are glaringly obvious. Genesis tells us clearly that humanity went through a population bottleneck (the Flood, where only 8 people survived), with one ultimate female ancestress (Eve).5”

Furthermore, Rob shows that there are three main mitochondrial lineages spread out on all continents—which is consistent with the biblical teaching that all humanity today is descended from the three daughters-in-law of Noah: “Even though they were each direct descendants of Eve, each of them would have carried their own particular mutations, picked up in the generations prior to the Flood. After the Flood, their descendants spread out across the world from Babel.”6

Dr Carter’s research includes the famous Neandertal Man, which many evolutionists and long-age creationists claim was non-human: “Recent archaeological studies show that Neantertals were behaviorally human; they apparently even had the spare time and intellect to make cosmetics.”7

Furthermore, this year the Neandertal genome was finally released, and “this showed us things completely unexpected from evolutionary theory. First, Neandertal was fully human. Second, he is related to people living in Eurasia today. Third, Neandertals interbred with modern humans, meaning they were the same species, even though evolutionists claim that they split off from modern humans 500,000 years ago.

“So there is nothing in the data to suggest Neandertals were not fully human. And there are many reasons to believe they lived on the earth after the Flood and are descended from Noah and his family like everybody else.”8

Since Dr Carter is a geneticist, I asked him what he thinks of claims of junk DNA.

“Junk DNA was invented by evolutionists in the late 1960s, based on theoretical work done in the 1950s. The limited amount of time, even in evolutionary history, puts a strict limit on the number of new mutations that natural selection could work on. This number is far too small to account for the massive number of genetic differences between humans and chimpanzees, for example. They ‘solved’ this dilemma by assuming that most (about 98%) of the genome was junk DNA. Natural selection only had to work on the important bits. This was supported in the 1980s and ‘90s when many thought that only protein-coding genes (about 2%) had useful functions in the genome.9

Once researchers found functions for the non-protein-coding regions of the genome, the entire [junk DNA] argument fell apart. Now we know that well over 90% of the genome is functional, even if it doesn’t code for protein.

“However, this argument is an argument from silence, similar to the old vestigial organ argument. Once researchers found functions for the non-protein-coding regions of the genome, the entire argument fell apart. Now we know that well over 90% of the genome is functional, even if it doesn’t code for protein. In fact, most of the genome is involved in producing RNA transcripts of the DNA. We don’t know what a lot of these things do, but the non-protein areas are very active.

“One vital function of the ‘junk’ DNA is the recently discovered ‘splicing code’. When the human genome was deciphered, scientists were puzzled to find only about 23,000 protein-coding genes, although cells produce hundreds of thousands of different proteins. How is this possible? Each gene is interspersed with sections of non-coding DNA. The coding portions are combined in many different ways to produce all the extra proteins. The interspersed ‘junk’ controls this ‘splicing’. The ‘junk DNA’ idea should be junked!”10

Dr Carter has also been a Christian from an early age. Like many, he was confronted with the claim that science and Christianity are incompatible. However, this was resolved when he found creation science at about age 19:

“Previously I had tried several ways of harmonizing the two, including the day-age theory and theistic evolution. The problem was that biblical integrity always lost out to “science” when I tried these approaches. And they put death and suffering before Adam’s sin, the opposite to Genesis 3, Romans 5 and 1 Corinthians 15. Young-earth creation is the only way to have both science and the Bible.”

As Dr Carter explains, “evolution is really the assumption of naturalism masquerading as science. Once I learned to question this underlying assumption, that natural processes can explain everything that ever was, is, or will be, the evolutionary story of origins crumbled like a house of cards. Real science is compatible with the Bible.”

Despite the amazing design of corals, evolutionists from Darwin to the present day have hijacked them for their own purposes. In particular, they argued that it took longer than the biblical timescale for huge coral reefs to form. Dr Carter counters:

“There are several things to consider before we concede the territory to the evolutionists. First, there is a difference between an individual coral animal and a coral reef created by thousands of corals over time. Not everything labelled a reef in the geologic record was an actual reef. Sometimes, a “reef” is declared from just a coral fragment, yet from Noah’s Flood, we would expect to find many broken and isolated fragments buried in the rocks, which we do.

“Second, even significant modern reefs, like Australia’s Great Barrier Reef (GBR), are recent for an evolutionist. During the peak of the Ice Age (creationists would not say “last” but “only” Ice Age11), the basement rocks of the GBR were dry land. So the entire modern reef must have grown since the end of the ‘last’ Ice Age, which is less than 10,000 years ago in the evolutionary model. For us, the Flood was about 4,500 years ago with the maximum extent of ice buildup perhaps 500 years after that. Scientifically, there is little difference between 10,000 and 4,000 years, when the dates are based on the growth rates of corals in unknown or assumed conditions—rates which are likely underestimated several times.12

“And third, there are no large, modern-type coral reefs deep inside the rock record. Every one of which I am aware is at or near the surface. There is nothing to indicate they have been growing on the earth for millions of years, irrespective of their evolutionary ‘age’. There are other reefs in the fossil record made from clams, algae, and extinct tabulate or rugose corals, but some of these do not have any modern analogues. I am currently developing ideas to explain these reefs in the context of the Flood, but there is still a lot of work to do!” 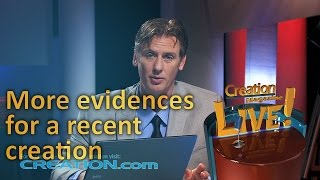