The evidence is overwhelming

Mainstream geologists do not even think about the possibility that Noah’s Flood happened.

Paleontologists recently announced the largest dinosaur ever discovered in Australia (figure 1), which they called Australotitan cooperensis (the genus name means ‘the southern titan’; cooperensis because it was found near Cooper Creek). The first of its fossilized bones was recovered in 2006 and 2007. Robyn and Stuart Mackenzie found the bones while riding motorbikes on their property 90 km west of Eromanga, 1,000 km west of Brisbane, and not far from the South Australian border. Now, after years of study, researchers have announced that the dinosaur’s size is on a par with the largest Titanosaurus dinosaurs from other parts of the world. All these dinosaurs were drowned and buried in Noah’s Flood. We will see evidence for this as we proceed.

Cooper, as it is nicknamed, was said to be as long as a basketball court and as high as a two-story building. That is, 25 to 30 metres (80 to 100 feet) long and 5 to 6 metres (16 to 21 feet) tall at its hip. They said it weighed about 70 tonnes. Its size was estimated from an arm bone, its humerus, which is the bone that reaches from the shoulder to the elbow. Other bones the researchers found include shoulder blades and pelvic bones. Cooper is similar in appearance to other long-necked sauropods such as Brachiosaurus and Apatosaurus.

… there would not have been any forests growing at that time.

Robyn Mackenzie is now a field paleontologist. In 2016, together with her husband Stuart, their family, and the small 60-strong town of Eromanga, they established the Eromanga Natural History Museum.

Scott Hocknull from the Queensland Museum headed the research and field investigations. He and five others, including Robyn and Stuart Mackenzie, published their findings in the journal PeerJ on 7 June 2021.1 At 130 pages, it is a thorough paper in which they meticulously describe much relevant detail for A. cooperensis, such as the geology and paleontology of the discoveries. They also summarise other dinosaur finds in Queensland over the last decade or so.

These scientists have done careful research, faithfully excavating, measuring, and recording the find. However, it’s fascinating that they have not recognized the dramatic evidence that this dinosaur perished in Noah’s Flood and was buried during that event, which destroyed the earth some 4,500 years ago. I suppose it’s understandable they did not consider this because such an idea would not have been given serious mention in their geological training. Mainstream geologists do not even think about the possibility that Noah’s Flood happened. In fact, to mention such an idea among their colleagues would risk losing their job. Nevertheless, the evidence for their Flood demise is overwhelming (see box).

The dinosaur fossils were found in the Winton Formation, which is the topmost formation of the Great Artesian Basin (figure 2). This extensive sedimentary basin covers much of eastern Australia. It’s generally around 2–3 km thick (figure 3) but more in some places, like the Surat Basin. The careful study linked in the box shows that this basin was deposited about half way through Noah’s Flood as the waters were peaking on Earth. Sediments would have been deposited above the Winton Formation as the waters of the Flood continued to rise for a while, but these were eroded away as the waters were receding. This left the Winton Formation as the topmost deposit remaining on the surface, but erosion was uneven, meaning the formation is not continuously present. This makes the geological relationships difficult to work out. Nevertheless, Hocknull et al. estimate the dinosaur bones were some 270–300 m from the base of the Winton Formation, which is close to the peak of the Flood.

Evidence dinosaurs were overwhelmed and buried by Noah’s Flood

Here are links to a few articles that describe the evidence for the dinosaurs being buried during Noah’s Flood.

A simple guide to help you see where the dinosaur rocks (Triassic to Cretaceous) fit in Noah’s Flood. The geology transformation tool: A new way of looking at your world

Evidence for water covering Queensland quite deeply in the past and for marine animals being buried rapidly such that they are well preserved. Deluge disaster: Amazing Australian plesiosaur preservation

Evidence that the burial of the dinosaur involved lots of water and sediment. Fossilization of large animals after death requires rapid burial by a significant depth of sediment. Dead crocodiles down under: How croc decomposition helps confirm a crucial element of Bible history

More evidence for lots of water. Dinosaurs near Winton making tracks while swimming in shoulder-deep water. A stampede of swimming dinosaurs

Another example of a dinosaur caught up in deep water, this time a dinosaur in Spain swimming through deep water. Terrible lizards trapped by terrible Flood

Enormous dinosaurs near Winton, possibly the size of A. cooperensis, leaving footprints in soft mud. Notice the flatness of the landscape in figure 6 of this article. This flatness was caused by the waters of Noah’s Flood when they covered the whole area. The same flat landscape is evident around Eromanga. Dramatic dinosaur footprints at Karoola station, Australia: Fleeing the rising waters of Noah’s Flood

Another graveyard consistent with the biblical Flood impacting the whole world. Massive graveyard of parrot-beaked dinosaurs in Mongolia: Paleontologists puzzle about the cause of death but miss the obvious clue

This article explains why we can discount the quoted, subjective dates of millions of years and interpret the dinosaur as being buried in Noah’s Flood. How dating methods work

Another explanation of how radioactive dates are accepted or rejected depending on the geological field relationships. The way it really is: little-known facts about radiometric dating

Insights from the artist’s impression

Vlad Konstantinov and Scott Hocknull, two of the authors of the PeerJ paper, made available an artists’ impression of the dinosaur (figure 1). It’s a good representation, especially in the way the sauropod holds its head and tail. Interestingly, it shows the dinosaur wandering through an idyllic country setting, a desirable place to take one‘s family camping today.

However, it was anything but idyllic at the time it was buried. Cooper and his friends were trying to escape from the turbulent, sediment-laden waters of the global Flood as they were devastating the area. We see evidence for this at dinosaur sites all over the world. In the figure a forest is shown growing in the distance, but there would not have been any forests growing at that time. All the forests had been destroyed. Yes, there was much vegetation around, but this had been ripped up by the Flood from the pre-Flood continents. The vegetation was being washed around and buried. Some of the broken logs are found petrified in the region. It is worth noting that vegetation buried just a little earlier in the Flood across this vast area is now more than a kilometre underground. It is the source of the oil and gas from the Eromanga and Cooper basins, which are the premier onshore oil and gas producing basins in Australia.

Again, on the artist’s impression, consider that the water would not have been flowing in a gentle stream as the picture shows. Rather, it would have been surging periodically across the area in a torrent. It is not uncommon to find evidence of dinosaurs in deep water at the time—several examples are given in box above. They were trying to escape. At this site near Eromanga, we see evidence of how the dinosaurs were trampling through the mud and sediment, leaving a footprint mishmash that has been preserved by further sediment dumped on top by the floodwaters. The paleontologists describe this trampled sediment as dinosaur bioturbation.

Next time you see a picture of a dinosaur like this or read a news report of a new dinosaur find, remember the global Flood that the Creator brought upon our world. Dig out your Bible and read what happened in Genesis chapters 6–9. Consider that these dinosaurs that are being dug up in Queensland are described in that account, in Genesis 7:21–22. This must be one of the saddest statements in the Bible:

Every living thing that moved on land perished—birds, livestock, wild animals, all the creatures that swarm over the earth, and all mankind. Everything on dry land that had the breath of life in its nostrils died.

And Hebrews 11:7 must be one of the most encouraging:

By faith Noah, when warned about things not yet seen, in holy fear built an ark to save his family. By his faith he condemned the world and became heir of the righteousness that is in keeping with faith. 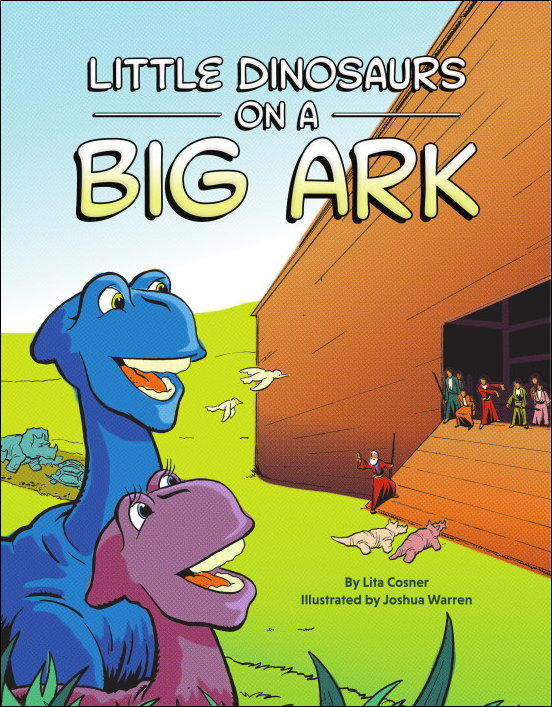