A stampede of swimming dinosaurs

Such tracks would be very difficult, if not impossible, to have formed on land.

Lark Quarry Dinosaur Trackways (or just ‘Lark Quarry’) in central-western Queensland, Australia, is world-famous for what has been billed as a dinosaur stampede imprinted in rock. A trackway is composed of two or more footprints from the same animal. Scientists have interpreted the tracks as made by dozens of small dinosaurs fleeing a large meat-eating theropod dinosaur, such as an Allosaurus. Three to four thousand footprints were made over an area the size of a basketball court. The small tracks ranged from chicken-sized to emu-sized dinosaurs. The site has been covered with an enclosed and air-conditioned museum and is a major tourist attraction in Australia.

A more detailed analysis by researchers from the University of Queensland concluded that this interpretation of the tracks was grossly wrong, which shows that we need to be skeptical of interpretations of the past.1

The large ‘theropod’ becomes a plant-eater

The first misinterpretation was identifying the large trackway as that of a large bipedal theropod.2 Bipedal means that the dinosaur walked on only its hind legs. It can be difficult to tell the difference between a bipedal theropod, like Tyrannosaurus rex, and an ornithopod, plant-eating dinosaur, such as a hadrosaur or duck-billed dinosaur. The in-depth section below describes the classification of dinosaurs.

Usually, theropod tracks show the three toes as long and thin with the middle toe especially long. Claw marks are often preserved. Bipedal three-toed ornithopods on the other hand have wider tracks with thicker toes and small claws. Many of the variables associated with theropod and ornithopod tracks can now be computerized and tested against other trackways.

The new research employed such 3D computer analysis and discovered that the ‘theropod’ tracks were actually from an ornithopod. The researchers summarize: “The multivariate [multiple variables] analysis strongly supports ornithopod affiliation for the large tridactyl [three-toed] tracks at Lark Quarry.”3 They believe the type of ornithopod is an Iguanodon, one of the first types of dinosaurs to be discovered in Europe, and regarded as a herbivore. Therefore, the smaller dinosaurs were not running away from a carnivore.

The small dinosaur tracks were also re-analyzed and a radically different interpretation has been given to them.4 First, the original research claimed that there were two types of small tracks, one from a theropod and one from an ornithopod. But a 3D re-analysis indicated that the tracks are all from the same type of short-toed dinosaur. The longer tracks were made by the track-maker dragging its toes through the sediment. Clearly the same animal made different tracks because researchers found the two types of tracks in the same trackway! The differences in the tracks are probably due to the changing water depth (see below).

Second, the type of tracks indicates that all the dinosaurs were ornithopods. There were no theropods in the group at all.

Third, although some tracks look like tracks made in a terrestrial environment or in shallow water, many of the tracks are swim tracks. The latter tracks are nothing more than elongated grooves, likely formed when the claws of swimming dinosaurs scratched the bottom. Some tracks are ‘tippy-toe’ traces, deep near-vertical scratch marks, like a ballerina would make dancing en pointe across the stage. Such tracks would be very difficult, if not impossible, to have formed on land. If made on land, the tracks should be much flatter—the much more common situation with tracks worldwide.

Fourth, the tracks were made in a current of water. Many of the tracks had a large spacing for the size of the dinosaur, indicating that the dinosaurs were likely being taken with the current. Since most trackways were headed northeast, this suggests that the current was in this direction too. Another indication of a northeast current is the northeasterly drag marks made by vegetation. However, the large ornithopod was headed south and not swimming.

Fifth, the water probably fluctuated rapidly in depth, based on variable swim tracks made by the differently sized small dinosaurs. The researchers think that the water varied from 15 to 40 cm in depth, but it could have been from zero to 40 cm since some of the tracks were normal tracks as expected on land.

The new interpretation steeped in uniformitarianism

We need to be skeptical of all uniformitarian thinking, since this belief automatically eliminates the Genesis Flood as a possibility.

The tracks clearly show that the small dinosaurs were swimming, at least some of the time. However, the new interpretation assumes typical uniformitarian conditions and so postulates a river environment. Uniformitarianism is the assumption of geology that present-day processes we observe today explain all the past rocks. We need to be skeptical of all uniformitarian thinking, since this belief automatically eliminates the Genesis Flood as a possibility.1

Moreover, the researchers believe the tracks were made over a period of days or weeks because of the fluctuating water levels. They cannot seem to envision the water level going up and down fast enough during a passage of only a matter of seconds to possibly a few minutes. But another scientist commented that all the dinosaur tracks still indicate a stampede, but through water: “ … but it still looks like we are talking about a significant group of dinosaurs all moving together as one mob.”5 If this is the case, then the water levels really were fluctuating rapidly, in seconds.

Regardless, this new interpretation of the past environment is still that: an interpretation, as admitted by the University of Queensland researchers:

“However, it should be realized that both the original scenario and the one we propose are interpretations that should be assessed on their merit based on the evidence available.”6

There is another interpretation that also fits the facts and that is the BEDS (Briefly Exposed Diluvial Sediments) hypothesis.7 (Diluvial refers to the Genesis Flood, which is described in Genesis chapters 6 to 8, and lasted some 370 days.) The BEDS model is based on the fact that the level of the Floodwater would fluctuate up and down as it rose in the first half of the Flood. The fluctuation would be caused by tides, uplift and sinking of the earth’s crust, and other mechanisms including effects of the earth’s rotation. The dinosaur tracks can be placed early in the Flood before all land animals died by Day 150.8

In areas with rapid deposition of sediments, a brief drop in the level of the Floodwaters would expose a flat bedding plane (BEDS). Dinosaurs swimming or on higher land nearby could move onto the BEDS and thus make tracks, lay eggs, and scavenge dead dinosaurs. But as the water level goes up, the muddy Flood water would cover the dinosaur features and rapidly drive the dinosaurs off the BEDS. Such covering with sediments from the Flood waters would preserve the dinosaur traces—a major uniformitarian problem since tracks erode quickly—indeed, that’s why a conservation building was required soon after the tracks were uncovered. Since there were likely hundreds of such oscillations early in the Flood, such a scenario could repeat many times. This would account for several levels of dinosaur tracks in an area.

The Lark Quarry can easily be interpreted within the BEDS model. The evidence for rapidly fluctuating water levels would not be due to an ancient river but is actually a prediction of the BEDS hypothesis. Such rapid fluctuations are also supported by the character of the sedimentary rocks, which at the Lark Quarry area are thin siltstone/sandstone layers, as expected from an increasing and decreasing flow of sediment-charged water. The researchers say, “Instead, the sediments and associated sedimentary structures at Lark Quarry indicate minor cycles of increased and decreased flow velocities … ”9 There are also erosive contacts and cross beds and pieces of the bottom sediment within the sandstone, indicating the sand was deposited in relatively fast currents. The researchers state: “This suggests a period when the track horizon ceased deposition, hardened (perhaps subaerially [while exposed to air]) prior to the high-energy regime when sand was deposited.”10 So, the tracks at Lark Quarry could have simply been made during the subsequent rise in the level of the Flood water with the dinosaurs mostly swimming.

The BEDS model has a straightforward explanation for the dinosaur tracks at Lark Quarry, as well as around the earth. The Genesis Flood can explain many seemingly-puzzling features of the rocks and fossils. The Bible can be trusted to provide answers. 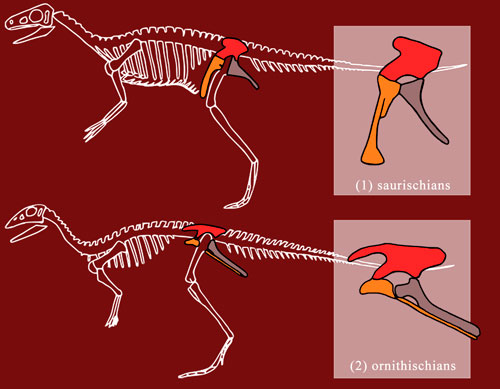 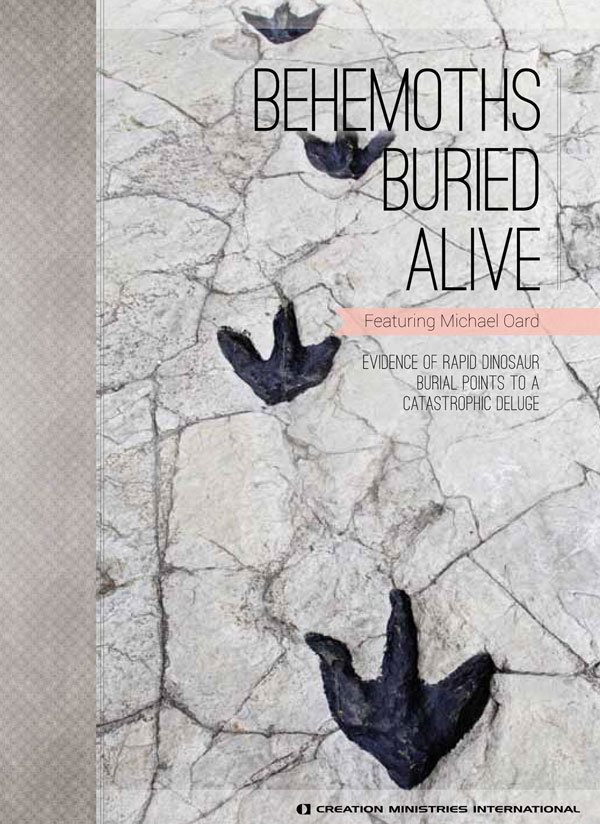