In my realm of professional interest (physics) there are really only two types of scientists: experimental physicists carrying out experiments in laboratories, and astrophysicists (or cosmologists) who use the universe as their ‘laboratory’. Both construct mathematical models to describe their observations. Both test their models against those observations.

Within our solar system we have been able to send probes to make observations. For example, NASA’s Deep Impact probe1 shot a 370 kg copper bullet into a comet2 and measured the spectra3 of the ejected material. And the European Space Agency (ESA)’s Rosetta spacecraft landed a robotic lander, Philae, on a comet4 and made, for the first time, direct measurements of the surface constituents. These types of measurements, you could say, are very similar to what the experimentalists do in their laboratories. But the Rosetta mission’s objectives, excerpted from the ESA website, highlight the type of science involved (emphases added):

Astronomers only observe, they cannot interact with their experiment.

These are their basic underlying assumptions. This statement makes it clear that the scientists who carried out the mission believe that the solar system evolved out of a solar nebula originating more than 4.6 billion years ago. That is their untestable primary assumption. It is not testable by what they dig out of the surface of the comet, but rather they believe the measurements of that comet material will help them understand the origin of the solar system within their original assumption.

No matter how much evidence they accumulate they cannot directly observe the past; certainly not without assumptions. The material they dig out of those comets is evidence to which they always need to apply interpretations.

Even in the case of astrophysics, you might think that the astronomer is observing the past, because the light entering his telescope supposedly took millions or billions of years to traverse the vast universe to earth. But even this has its limits to what we can know.

The secular astronomer receives light into his telescope on earth and makes the uniformitarian assumption that the light has been travelling at a constant speed (of about 300,000 km/s) for the past millions or billions of years to reach earth, and with no relativistic time dilation effects (where clocks run at different speeds in different parts of the universe).6 Only after making that assumption can he make the further assumption, not know, that what he observes is coming from some past epoch millions or billions of years earlier. But how could you test that assumption? You can’t! And for that reason this aspect of astrophysics/cosmology is not directly provable by any empirical test.

In the case of all observations beyond the solar system the problem is beyond dispute. You cannot go there. The sizes, distances and assumed ages of galaxies and other cosmic radiation/light sources, are so great that even what we measure is as though we are taking a single still photograph; it is just a moment in time.

Astronomers only observe, they cannot interact with their experiment as the experimental physicist in the laboratory can do. And what makes matters even more difficult for the astrophysicist or cosmologist is that there are many possible explanations for the same observations. But because they cannot interact with the sources under investigation (which might even be the whole universe) their science is very weak indeed. For this very reason James Gunn, co-founder of the Sloan survey, said:

“Cosmology may look like a sci­ence, but it isn’t a science. … A basic tenet of science is that you can do repeatable experiments, and you can’t do that in cosmology.”7

Astrophysics and cosmology are by their very nature loaded with philosophical underpinnings. In principle there is nothing wrong with that. You could not do any sort of science without a basis to build your model. The set of unprovable philosophical underpinnings (also called presuppositions or axioms) comprise one’s worldview. And we all have a worldview. We form that based on what we believe about the world around us and how it all began.

The difference here is that my worldview is based on the biblical truth that God, the Creator, created the universe about 6,000 years ago. It was not the result of an accident or a quantum fluctuation of some imagined/postulated vacuum or a big bang of any sort. Rather it was the result of plan and purpose as God told us in the Bible.

However, the worldview that underlies modern secular/mainstream cosmology, and cosmogony (on the origin of the universe) is an atheistic one. It has no place for a Creator, and only relies on what man can discover for himself. As a result he has had to resort to all sorts of fudge factors8 to make his model fit the observational data, the evidence from the cosmos. 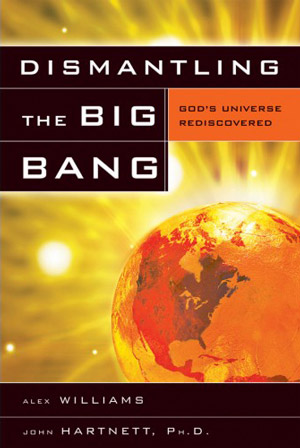