When the person you talk to on creation insists that you ‘leave the Bible out of it’, they are really saying the deck should be stacked one way.

Over the years, many people have challenged me with a question like:

‘I’ve been trying to witness to my friends. They say they don’t believe the Bible and aren’t interested in the stuff in it. They want real proof that there’s a God who created, and then they’ll listen to my claims about Christianity. What proof can I give them without mentioning the Bible so they’ll start to listen to me?’

Briefly, my response is as follows.

The difference is in the way we all interpret the facts. And why do we interpret facts differently? Because we start with different presuppositions. These are things that are assumed to be true, without being able to prove them. These then become the basis for other conclusions. All reasoning is based on presuppositions (also called axioms). This becomes especially relevant when dealing with past events.

However, if we weren’t there in the past to observe events, how can we know what happened so we can explain the present? It would be great to have a time machine so we could know for sure about past events.

They are arguing about their interpretations based on their presuppositions.

Christians of course claim they do, in a sense, have a ‘time machine’. They have a book called the Bible which claims to be the Word of God who has always been there, and has revealed to us the major events of the past about which we need to know.

On the basis of these events (Creation, Fall, Flood, Babel, etc.), we have a set of presuppositions to build a way of thinking which enables us to interpret the evidence of the present.

Evolutionists have certain beliefs about the past/present that they presuppose, e.g. no God (or at least none who performed acts of special creation), so they build a different way of thinking to interpret the evidence of the present.

Thus, when Christians and non-Christians argue about the evidence, in reality they are arguing about their interpretations based on their presuppositions.

That’s why the argument often turns into something like:

‘Can’t you see what I’m talking about?’

These two people are arguing about the same evidence, but they are looking at the evidence through different glasses.

It’s not until these two people recognize the argument is really about the presuppositions they have to start with, that they will begin to deal with the foundational reasons for their different beliefs. A person will not interpret the evidence differently until they put on a different set of glasses—which means to change one’s presuppositions.

It is of course sometimes possible that just by presenting ‘evidence’, you can convince a person that a particular scientific argument for creation makes sense ‘on the facts’. But usually, if that person then hears a different interpretation of the same evidence that seems better than yours, that person will swing away from your argument, thinking they have found ‘stronger facts’.

However, if you had helped the person to understand this issue of presuppositions, then they will be better able to recognize this for what it is—a different interpretation based on differing presuppositions—i.e. starting beliefs.

As a teacher, I found that whenever I taught the students what I thought were the ‘facts’ for creation, then their other teacher would just re-interpret the facts. The students would then come back to me saying, ‘Well sir, you need to try again.’

What was happening was that I had learned to teach the students how to think rather than just what to think. What a difference that made to my class! I have been overjoyed to find, sometimes decades later, some of those students telling me how they became active, solid Christians as a result.

If one agrees to a discussion without using the Bible as some people insist, then they have set the terms of the debate. In essence these terms are:

A Christian cannot divorce the spiritual nature of the battle from the battle itself. A non-Christian is not neutral. The Bible makes this very clear: ‘The one who is not with Me is against Me, and the one who does not gather with Me scatters’ (Matthew 12:30); ‘And this is the condemnation, that the Light has come into the world, and men loved darkness rather than the Light, because their deeds were evil’ (John 3:19).

Those arguing against creation may not even be conscious of their most basic presupposition, one which excludes God a priori, namely naturalism/materialism (everything came from matter, there is no supernatural, no prior creative intelligence).1 The following two real-life examples highlight some problems with that assumption:

[Ed. Note: for more information on formal logic and the Christian faith, see Loving God With All Your Mind: Logic and Creation.]

Agreeing to such terms of debate also implicitly accepts their proposition that the Bible’s account of the universe’s history is irrelevant to understanding that history!

1 Peter 3:15 and other passages make it clear we are to use every argument we can to convince people of the truth, and 2 Cor. 10:4–5 says we are to refute error (like Paul did in his ministry to the Gentiles). Nonetheless, we must never forget Hebrews 4:12: ‘For the word of God is living and powerful and sharper than any two-edged sword, piercing even to the dividing apart of soul and spirit, and of the joints and marrow, and is a discerner of the thoughts and intents of the heart.’

Also, Isaiah 55:11: ‘So shall My word be, which goes out of My mouth; it shall not return to Me void, but it shall accomplish what I please, and it shall certainly do what I sent it to do.’

When someone tells me they want ‘proof’ or ‘evidence’, not the Bible, my response is as follows:

‘You might not believe the Bible but I do. And I believe it gives me the right basis to understand this universe and correctly interpret the facts around me. I’m going to give you some examples of how building my thinking on the Bible explains the world and is not contradicted by science. For instance, the Bible states that God made distinct kinds of animals and plants. Let me show you what happens when I build my thinking on this presupposition. I will illustrate how processes such as natural selection, genetic drift, etc. can be explained and interpreted. You will see how the science of genetics makes sense based upon the Bible.’

One can of course do this with numerous scientific examples, showing how the issue of sin and judgment, for example, is relevant to geology and fossil evidence. And how the Fall of man, with the subsequent Curse on creation, makes sense of the evidence of harmful mutations, violence, and death.

Once I’ve explained some of this in detail, I then continue:

‘Now let me ask you to defend your position concerning these matters. Please show me how your way of thinking, based on your beliefs, makes sense of the same evidence. And I want you to point out where my science and logic are wrong.’

In arguing this way, a Christian is:

Remember, it’s no good convincing people to believe in creation, without also leading them to believe and trust in the Creator/Redeemer, Jesus Christ. God honours those who honour His Word. We need to use God-honouring ways of reaching people with the truth of what life is all about. 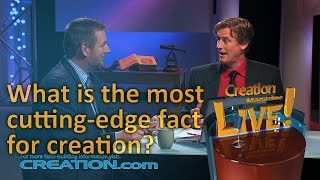 The Creation Answers Book
by Various
US $15.00
Soft Cover
Leaving Your Brains at the Church Door?
US $10.00
DVD