Conclusive evidence that dust rings around some stars grow into planets?

Astronomers at the Max Planck Institute for Astronomy in Heidelberg, Germany, are claiming to have captured a spectacular snapshot of planetary formation around a young dwarf star. They did this using the SPHERE instrument on the European Southern Observatory’s Very Large Telescope (VLT) in the Atacama Desert of northern Chile.1 They found evidence of a giant gas planet with a mass a few times that of Jupiter near the orange dwarf star PDS 70, some 370 light-years from Earth. This may come as a surprise to many of you, but telescope technology has made tremendous leaps over the past several years. No longer are stars ‘points’ of light. We now have the ability to capture images of some of the larger and closer stars, and whatever might be orbiting them.

The planetary companion to this star was found within an inner gap of what astronomers have termed a ‘protoplanetary disk’. Protoplanetary disks are believed to form from the leftovers of the molecular cloud that supposedly collapsed to form the star. But in this case, there is a gap between the dust and the star, making it look more like a donut than a disk. The doughnut-hole gap is called a transition disk because it is considered to be in transition from a formerly solid disk to a stellar planetary system, and large gaps have presumably begun to form.

Inner gaps within protoplanetary disks have been known for decades, but this is the first reported detection of a planet within a gap.

It seems that the newly-detected planet, named PDS 70b, has vacuumed out this dust-free section as it orbits the star. It’s like a toddler of sorts, learning how to walk. It’s making the transition to a fully-fledged planetary system. At least, that’s how the story goes.

We have an example of this in our own solar system. Several of the gaps in Saturn’s rings are caused by small shepherd moons. As these moons orbit within the rings, they clear out a gap. Astronomers guessed that there would be small moons in those gaps centuries before we found them.

The exoplanet’s surface has a temperature of around 1000°C, making it much hotter than any planet in our own solar system. Analysis of its light spectrum indicates the atmosphere to be cloudy. PDS 70b is located roughly three billion kilometres from the central star, about the distance between Uranus and the Sun. Its orbital period is around 120 years.

Inner gaps within protoplanetary disks have been known for decades, but this is the first reported detection of a planet within a gap. Astronomers look for planets within these gaps because, according to naturalistic theories of planet formation, these disks are the “maternity wards” for new planets and an empty gap within the disk is where they expect to spot new planets.

Let’s analyze these claims from a creationist perspective.

The Age of the Star Is Based on Assumptions

PDS 70 is a T Tauri star (see below) in the constellation Centaurus, thought to be about 10 million years old—young compared to the sun’s naturalistic age of 4.6 billion years. How do they know how old the sun is? Scientists today use radioactive elements in what they consider ‘primordial’ meteorites to estimate the age of our sun. They reason that a meteorite cannot be older than the solar system.

However, we must realize that there are many reasons to question the accuracy of radiometric dating. Specifically, the results of the RATE Project discredit many of the conclusions drawn from this branch of science (RATE, which stands for Radioisotopes and the Age of the Earth, was a research project conducted by the Creation Research Society and the Institute for Creation Research to assess the validity of radiometric dating). Thus, the sun’s age (and the age of stars) as calculated by the evolutionary cosmological community cannot be accurate.2

T Tauri stars are low-mass, compared to the sun. They are thought to be young because their cores have not yet ignited into hydrogen fusion. Until fusion begins (presumably after about 100 million years of development), a T Tauri is powered by gravitational energy, which is released as the star contracts. During contraction, the T Tauri star develops a strong solar wind which gradually blows away the gas and dust that envelopes it.3 T Tauri stars tend to occur in groups, which are generally associated with regions full of interstellar nebulosity (“space clouds” consisting mostly of hydrogen and dust) which could eventually form into planets, according to theory.4 In other words, if a star has a core that is too cool to undergo fusion, and if it is found with a nearby cloud of dust and gas, then it is assumed to be a young star about which exoplanets could be forming. Astronomers focus their telescopes in these regions in search of exoplanets.

Astronomers are assuming that the dust disks surrounding some stars have played a role in the stars’ formation. That these stellar disks of gas and dust are the birthplaces of stars is yet to be proven, and star-formation models have many problems to overcome. For instance, we have seen examples of stars that are “old” according to accepted ideas of stellar evolution but they have extensive dust disks. Scientists have also found some “young” stars with no disks.5 Thus, the theory cannot explain what we are seeing. Nevertheless, since gas/dust disks dissipate over time, stars which have disks are assumed to be young.

The Age of the Exoplanet Is Based on Assumptions

Though models of planet formation abound, they all have one thing in common: they all involve dust dynamics in the protoplanetary disk.6 According to the various theories, planets grow from gravitational instability in the accretion disks. The dust particles clump into a rocky core, then this core attracts gas and dust to form the outer gaseous layers of a gas giant planet.6 If the dust were evenly distributed, gravity would be balanced and no accretion would occur. Self-collapse (supposedly) occurs because of a higher density of material in some regions of the disk than other regions. Planet formation must be largely complete before the star enters its T Tauri phase, because, according to the theory discussed above, the star would give off a very intense solar wind that would drive much of the excess gas and dust out of the system.7

But the idea that growth occurs via collisions has tremendous problems. Computer models cannot explain how dust particles stick together due to gravity.

But the idea that growth occurs via collisions has tremendous problems. Computer models cannot explain how dust particles stick together due to gravity. As grain size increases, so does the mean collision velocity, which would cause grains to break into smaller pieces.6 Simulations show that meter-sized particles have the highest drift speeds, about 100 m/s. This makes it quite challenging to grow to larger than meter sized objects, since collision speeds of this order will rather destroy the bodies via fragmentation or erosion.6,8

Theorist have been glossing over this problem for decades. The Swinburne University of Technology website is typical in this regard, saying, “While the mechanism is not yet fully understood, the grains will eventually become kilometre-sized planetesimals.”9 Once they reach that size, gravity can take over. But nobody can figure out how to go from dust to a small planetoid at least one kilometer in diameter.

Difficulties in the Physics of Naturalistic Star Formation

Physics does not seem to allow naturalistic star-formation without just-so storytelling to get past the rough spots. And since planets are presented as by-products of the star formation process,8 the success of planet formation theories ultimately depends on successful ideas of star formation.

We know from experience that the tendency of a cloud of gas is to expand rather than to contract. Think of what would happen if an astronaut took off her helmet and let out a breath of air into outer space. That gas would rapidly disperse. In a cloud of gas, there is always an outward radiation pressure that is proportional to the gas’s temperature: the hotter the gas, the more outward pressure it has for expansion. A cloud is said to be ‘virialized’ when the gravitational energy (the inward pull) is balanced by the internal kinetic energy (the outward push related to its temperature). Stable molecular gas clouds in outer space are in this type of equilibrium, so they will not spontaneously collapse to form stars. Some kind of shock wave, presumably caused by a supernova explosion in the vicinity, must push the gas cloud over the limit where self-gravity will overcome gas pressure. John Hartnett explains the situation concerning star-forming computer simulations, saying, “No simulation actually starts with just a gas cloud, but rather with either dark matter or a very dense already collapsing gas cloud. If they didn’t program in the necessary initial conditions, the simulations would not result in any stars or planets.”8

There are other big problems with getting a gas cloud to spontaneously collapse and form a star. Magnetic fields that oppose the collapse must be eliminated. Also to be explained is the reason why 99% of the angular momentum lies in the disk and planets of a system instead of in the central star, where it should be if the system actually came from the same collapsing cloud.8 For example, there is much more kinetic energy in the spinning of Jupiter than that of the sun.

We cannot explain the universe using purely naturalistic processes. Stars do not form from clouds of gas. Neither do planets. Life does not come from random chemicals, and complex life cannot rise from simple life. Human consciousness cannot be explained by molecules wiggling in our brains. Because of this, we are free to examine the universe from a creation standpoint. There are also no limits on the Creator. On Day 4 of the Creation Week, God may have created a variety of stars, even some that were in the process of collapsing from a gas cloud, with planetary systems at different stages of development. Also, we must keep in mind that, outside our own solar system, millions of years of astronomical processes could have occurred in the Humphries/Hartnett-type time dilation models, while 24-hour days were passing here on earth.10 Taking this into consideration, it may be too early to say conclusively whether or not we are actually seeing new planetary systems in formation. From experience, we can rest assured that correctly-interpreted observational data will corroborate the biblical narrative that God made the sun, moon, and stars on Day 4 of Creation Week about 6,000 years ago. 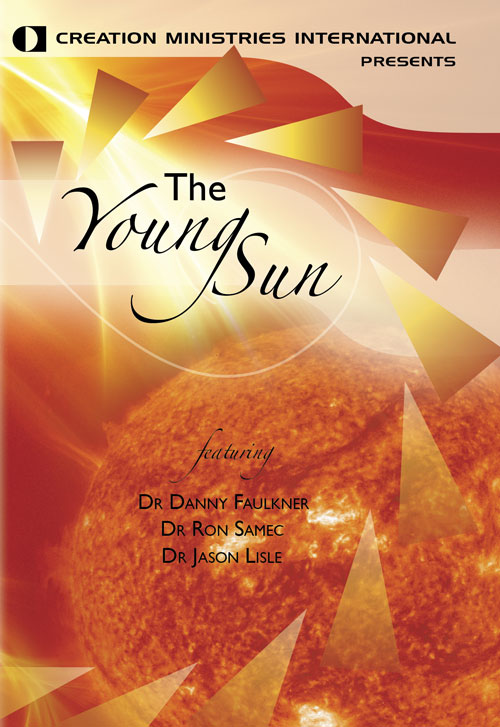