Dr David King was a professional Astronomer for eight years at Sydney Observatory (Australia). He was the last NSW Government Astronomer as the observatory ceased its research functions in the mid 1980s. He has a B.Sc. (Hons.) from Sydney University, which also awarded him a Ph.D. in applied mathematics for his thesis Open Star Clusters, a comparison of theory, simulations and observations. He was awarded the Young Astronomers grant by the International Astronomical Union, and was twice awarded the Archibald Ollie prize for the best paper in the Journal of the Royal Society.

He is also a top cyclist—former NSW state champion, as well as a high class swimmer, setting over 50 national records in masters swimming.

David King (right) has been interested in astronomy since a young age. He tells us, ‘As a teenager I was involved in amateur astronomy at Belfield observatory in Sydney.’ For today’s young people interested in a career in astronomy, he advises, ‘It is important to specialize in the area that interests you most once you know the basics and the breadth of astronomic research. Always have an open mind to other ideas from areas outside your expertise that may apply to your research.’

Dr King has also been a Christian since he was a teenager. He says, ‘I made a personal decision to follow Christ as a teenager thanks to a school friend who is now a geologist.’

However, like many Christians, he says that the idea of creation in six ordinary days was not much of an issue at first. But at university, he realized, ‘The creation account in Genesis and conventional theory are in conflict. There are discrepancies over both the time frame and the order of events. Genesis 1 tells us the earth was created before the stars.’

So in his 3rd year, while studying the history and philosophy of science, he explains:

‘I chose to investigate the theory of evolution in detail to examine if it truly qualified to be considered a scientific theory. I examined the texts of experts in the theory who plainly admitted the inadequacies of the theory but held to it in “blind faith” as the alternative was obviously unacceptable to them.

‘Once I started investigating the subject I read anything on creation I could find. In the future, I believe, creation-believing researchers will continue to make discoveries that will undermine the theory of evolution so that more and more people will see the truth.’

How old is the universe?

But don’t many claim that long-age belief is essential for scientific research, especially in astronomy? Dr King dismisses this firmly:

‘There is no evidence of any scientific breakthrough based on long ages. All that is coming out of that belief is circular reasoning and a growing set of beliefs based on falsehoods.

‘Many great scientists have believed in creation, including many of the founders of astronomy like Copernicus, Galileo, Kepler and Newton.’

What about light travelling from stars millions of light years away in a biblical time scale? Dr King points to the new developments in relativistic cosmology by physicists Dr Russell Humphreys1 and Dr John Hartnett,2 where gravitational time dilation is compatible with the light reaching us in 6,000 years as measured by Earth clocks.

The Bible and science

Indeed, far from long ages being essential, Dr King points out an essential source of truth missing from much of today’s science, although it illuminated many of the founders of modern science:

‘All science must be based on the truth. God’s Word in the Bible is truth. Knowing the correct order of creation and the way God has expressed himself in creation is fundamental to understanding the world.’

‘One example of that would be the creation of “kinds”. God created kinds of creatures (Genesis 1), kinds of stars (1 Corinthians 15:41), kinds of planets, kinds of particles etc. Diversity is also part of His creation which shows us His love and creativity. From creation and diversity we can see how God makes each individual different. He cares for each one of us to make us different from everyone else.’

Dr King is also a subscriber to Creation magazine. He says:

‘The magazine is a valuable resource to keep us informed about what is going on in the scientific world with a Christian perspective. It gives us the tools we need to give an answer to those who ask us why and what we believe (cf. 1 Peter 3:15).’ 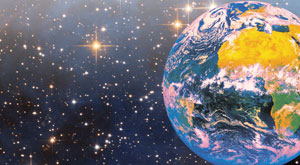 How vast God’s universe is: