the design of swifts and jet fighters

Bird aerobatics have fascinated bird-watchers since the beginning. And bird design has inspired the designers of flying machines for over a century.1 Yet still there are new discoveries about their intricate engineering, suggesting that we still have much to learn.

God revealed that He created flying creatures on Day 5 of Creation Week, the day before He created land creatures and man.

However, progressive creationists deny this and believe that land reptiles came before birds, and evolutionists believe that birds evolved from reptiles.2

Evolution-promoters seem not to understand how flight works, and how it needs so many things arranged in the right order. For example, the Skeptic-dominated Australian Museum claimed that some dinosaurs evolved a certain bone that ‘also allowed them to move their hands in a broad fan-shaped motion and to snap their long arms and grasping fingers forward to grab fleeing prey. This powerful, flapping motion has today become an important part of the flight stroke in modern birds.’3

However, this would be just the wrong sort of motion for flight. A flap in the forward direction would have the effect of pushing the bird backwards, according to Newton’s 3rd Law (every action produces an equal and opposite reaction). In a bird’s flap for powered flight, the primary flight feathers are angled in such a way that they force air backwards so the bird is propelled forwards. And the wings have an aerofoil shape like an airplane’s wings, angled to deflect air downwards. This produces lift, again by the reaction.4

Skeptics also ignore the amazing feather. The feather is an aerodynamic marvel that’s strong and lightweight, and completely different from a reptile scale.5,6 But feathers are not the sorts of structures that would be useful on limbs that flap at a prey animal, since they would be damaged by the pounding.

Finally, the purpose of the wings is to force air backwards and downwards so the bird is propelled forwards and kept aloft. So wings should form a wide surface that has high air resistance, so it can move large volumes of air. But for limbs designed to grab forward at prey, it’s an advantage to have a surface that has low air resistance, i.e. lets air through easily. Think of the holes in a fly swat, or streamlined shapes designed to move through the air as opposed to moving the air itself. Also, the rush of air from the proto-wing would warn the prey of its impending doom!

A recent study on swifts7,8 shows that there is even more to flight than downward deflection of air. They also make use of a leading-edge vortex (LEV) to generate even more lift, so that ‘the current understanding of how birds fly must be revised.’7

The bird wing actually has two parts: the inner ‘arm wing’ and an outer ‘hand wing’. The arm wing deflects air downwards just like an airplane wing, according to the lead researcher, John Videler of the Leiden and Groningen universities in the Netherlands.9 But analysis of the fluid10 flow showed that the sharp leading edge of the hand wing easily formed the ‘mini-tornados’ that helped suck the bird upwards. These form at a wide range of wing angles, so the bird wing is far less likely to stall (suddenly lose lift) than an aircraft wing.11

Swifts have scythe-shaped wings, each comprising a relatively small arm wing and a very long hand wing that generates a powerful LEV. So swifts can sweep their wings back for fast flight, but can ‘turn on a dime’8 by reducing the wing sweep (straightening the wings). It enables them to catch insects in flight (in their beaks!). And perching birds need LEVs to produce high lift at low speeds, otherwise they could not land on a branch.

The importance of LEVs has already been noted in insect12 and vulture13 flight. And aerospace engineers have also exploited their superb lift when it comes to landing supersonic jets safely. Their small, swept-back wings make fast flight possible, but without the LEVs, their small wings would not produce enough lift when they slow down to land.

The commentators spoiled their report of this research with the usual fact-free homage to evolution:

‘To maximize flight speed as well as maneuverability, evolution and aeronautic engineering converged on the same solution—variable wing sweep. Swifts and the Tomcat jet fighter keep their wings swept back to reach high speeds. To execute tight turns, both flyers reduce their wing sweep.’8 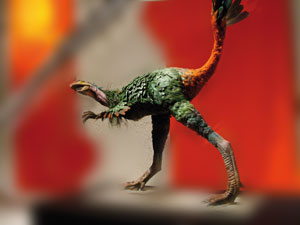 Many evolutionists propose that dinosaurs turned into birds. Supposedly, some dinosaurs began flapping their arms and developed feathers. Eventually, powered flight evolved. However, this would require many coordinated mutations to produce the masses of new information required. And dino-bird intermediates exist only as imaginary models (above)—not as fossils.

However, since we know that the jet fighter has been intelligently designed, then why not the swift as well, since good science works by analogy? Furthermore, the authors point out:

‘The gliding flight of storks inspired the first airplane designs of Otto Lilienthal in the late 19th century. The benevolent flight characteristics of these slow and stately gliders invested airplane pioneers with the confidence to take to the skies.’

‘In the future, the swift’s flight control might inspire a new generation of engineers to develop morphing microrobotic vehicles that can fly with the agility, efficiency, and short take-off and landing capabilities of insects and birds.’8

Swifts navigate in their sleep!

Swifts often fly at great heights at night—3,000 m (10,000 feet), in fact as high as small private planes—yet swifts are capable of more sophisticated feats of navigation than these. And they do it while sleeping (a swift shuts down half its brain at a time).

Dr Johan Bäckman, an expert in bird migration at Lund University in Sweden, studied over 200 swifts by radar. He found that they kept on course by an unexpected method. Rather than using landmarks on the ground, they judged their direction by the wind,14 so they would not be blown off course. Dr Bäckman said:

‘We found that swifts have an extraordinary ability to perform orientations in relation to wind. Even the most advanced planes, with good navigational instruments, would probably be unable to judge the wind drift like this. The remarkable thing is that they do all this while flying through the night and sleeping on the wing at these very high altitudes.’15

The superior flight control and navigation is just what we would expect from the biblical picture—birds were made by a Designer whose brilliance surpasses our understanding.

In the Beginning was Information
US $5.00
MP4 Video
Hallmarks of Design, 2nd Edition
by Stuart Burgess
US $13.00
Soft Cover