Although it was not my intention to start a series on fossil range expansions in this journal, numerous articles are being published every year expanding the time ranges of fossil species. I believe these reports are the ‘tip of the iceberg’ because these are only the ones I find by accident in my reading of many earth science journals. There is so much dogmatism over the accuracy and precision of the fossil record making up the geological column, and yet it appears that the order, even within the uniformitarian paradigm, is really not well established. There are, of course, other problems associated with the geological column.1

In this article I limit myself to time range expansions of global significance. Changes affecting particular localities or environments are not considered, nor are revised identifications of pre­viously fragmentary fossils.

The origin of flowering plants pushed back more than 100 Ma

Some of the fossil range extensions that I have reported in this journal are more significant than others. One of the most significant, if the results bears up under uniformitarian challenges, is that pollen from six types of flower­ing plants (angiosperms) has been discovered in the middle Triassic of northern Switzerland. This discovery pushes back the origin of flowering plants by 100 Ma!2 Creationists have already reported on this dramatic discovery.3,4 It had previously been a dogma that flowering plants evolved in the early Cretaceous, 140 Ma ago. Although the pollen that was found has all the earmarks of being from flowering plants, the authors refer to the pollen as ‘angiosperm-like’. They also mention that there have been other claims of pre-Cretaceous flowering plants, including ones the authors found in a core in the Barents Sea, north of Norway. However, to nullify the influence of anomalous fossils, the host strata are either redated or the observation is dismissed in some way, providing more evidence of the reinforcement syndrome and circular reasoning that goes into the placement of fossils in the geological column.5

The flowering plant pollen found in Switzerland exhibited considerable diversity and a remarkable ecological range, which raises the problem of their earlier evolution and why flower­ing plants are not ubiquitous in the Mesozoic until their widespread oc­currence in the early Cretaceous. The authors of the report write:

“If we accepted the monosulcate pollen from the Middle and Late Traissicas evidence for a pre-Cre­taceous origin of crown group an­giosperms the lack of fossil records throughout the Jurassic would re­main difficult to explain.”6

Numerous articles are being published every year expanding the time ranges of fossil species.

Of course, the sudden appearance of flowering plants in the fossil record with no ancestors is powerful evidence for creation with subsequent Flood buri­al. It is such a major mystery in evolu­tion that Darwin even referred to it as an ‘abominable mystery’.7

“Results suggest that the preservation of diagnostic or­ganic molecules is much more common than previously realized”.9

Acorn worms have recently been found in the Middle Cambrian Burgess Shale, British Columbia, Canada, extending their fossil record by 200 Ma.10 Most interestingly the acorn worm looks astonishingly (to the evolutionists) similar to those of today, and the problem of the Cambrian explosion has become even more problematic with the addition of a new organism.11

From China comes a report of the oldest known well-preserved and nearly complete primate skeleton, which is tarsier-like and very small.12 The date given is early Eocene, or about 55 Ma ago, which extends the supposed split between tarsier-like primates and apes by about 5 to 10 Ma.

The oldest fossils of an ape and a mon­key have recently been unearthed from Tanzania, ‘solidly dated’ at 25 Ma old.13 Although the results are controversial,14 this pushes back the fossil record of these primates (and their supposed divergence) around 3 to 5 Ma. Of course, another possibility is that apes and monkeys never diverged but have always been either apes or monkeys.

The origin of mammals now in the Late Triassic?

There is so much dogmatism over the accuracy and precision of the fossil record making up the geological column, and yet it appears that the order, even within the uniformitarian paradigm, is really not well established.

The origin of mammals continues to be placed earlier in the geological column with the finding of greater diversity, such as is found within the Jurassic period.15 Recent discoveries are showing that an obscure type of fossil, the Haramiyida, is a mammal, and that first appearance is in the late Triassic, pushing back the earliest undoubted mammals by many millions of years. This deduction is based on the finding of more complete fossils of Haramiyida in the Jurassic, which showed they were mammals.16,17 I might add that the origin of mammals now agrees with the so-called molecular clock. The origin of mammals is also close to the time for the supposed origin of dinosaurs, which makes one wonder why the mammals are not more ubiquitous in the Mesozoic, or are they? However, the deductions are controversial because of taxonomic problems.18

The discoveries are also causing some interesting evolutionary conundrums. For instance, the early mammals had fur, so fur supposedly evolved right away. Maybe mammals always had fur because they were created with it. Furthermore, it is stated that all major clades and feeding adaptations of mam­mals had diversified in the Jurassic, that the mammal ear had evolved three times, and the evolution of mammals had involved ‘convergences’ and/or reversals.

Some evolutionists still think of Neandertals as primitive and in­flexible; just a side branch of human evolution. However, more research using stone tool residue is showing that this stereotype image is misrepresentive.19 At the Abri du Maras site in France, dated about 70 ka in the evolutionary timescale and assumed to be Ne­andertal, a wide diversity of tools has been discovered. From these tools, it was discovered that Neandertals did not just mainly eat meat; they ate a wide variety of food, including mushrooms. They also ate fish, birds, and hunted small, fast game such as rabbits. The Neandertals used string, suggesting a high level of sophistication. It is interesting that this discovery pushed back the use of string by about 70 ka. The authors also add that much is missed in archaeology because of biases in what the researchers look for. Moreover, the new results challenge the idea that innovation came late with the Neandertals. Neandertals continue to become ‘smarter’ every year.

Evolutionists really cannot challenge creationists to explain the order in the fossil record, since that order appears to be far from established. I wonder what the order will look like 100 years from now. 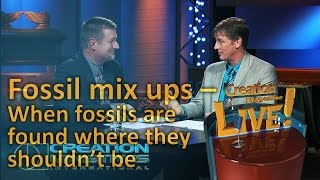