From the beginning of the creation

Does Genesis have a ‘gap’?

Is there a ‘gap’ of billions of years, in between verse 1 and verse 2 of Genesis chapter 1, into which Christians can conveniently assign the long ages claimed by evolutionary geologists?1,2

What does the Bible actually say? What did Moses intend to convey?

The most obvious and straightforward reading of Genesis 1 provides a prima facie case that Moses, under the direction of God, intended to write a literal historic account of what God had revealed to him (or to his antecedents), and not a cryptic message with clues for the super-intelligent. In other words, if God had meant us to understand that there was a gap of billions of years between verses 1 and 2, involving so many details about Satan, sin, judgment, punishment, re-creation, etc., we might reasonably expect that He would have provided the author with at least some of these alleged details. He did not. Nor are they to be found anywhere else in the Bible.3

‘It cannot be denied, in spite of frequent interpretations of Genesis 1 that departed from the rigidly literal, that the almost universal view of the Christian world until the 18th century was that the Earth was only a few thousand years old. Not until the development of modern scientific investigation of the Earth itself would this view be called into question within the church.’4

Genesis 1:31 says, ‘And God saw every thing that He had made, and behold it was very good.’ [The Hebrew is tov meod, which indicates perfection, a complete absence of evil of any kind, as Calvin and many other commentators have pointed out.] This is hardly an accurate description, if the being who became Satan had already rebelled! And if there were billions of ‘Lucifer-flood’ fossils with the marks of disease, violence, death, and decay, corresponding to the perishing of an entire pre-Adamic race and the extinction of a complete world of animals, with Adam and Eve walking around on top of buried fossils, how could God have called all this ‘very good’?5 (In their monumental Old Testament commentary, Keil and Delitzsch say about ‘very good’ in Gen. 1:31: ‘everything was perfect in its kind … the existence of anything evil in the creation of God is absolutely denied, and the hypothesis entirely refuted, that the six days’ work merely subdued and fettered an ungodly, evil principle, which had already forced its way into it.’)

Surely a flood which is explicitly described in the Bible is a better source of the fossils than a hypothetical flood which the Bible does not mention at all!

Genesis 6–9 describes a worldwide flood in which all the air-breathing land animals which were not on Noah’s Ark died. As gappists assign the fossils to ‘Lucifer’s flood’, they are forced to conclude that Noah’s Flood left virtually no trace or was merely local. Surely a flood which is explicitly described in the Bible is a better source of the fossils than a hypothetical flood which the Bible does not mention at all!

Exodus 20:11 says, ‘For in six days the Lord made heaven and earth, the sea, and all that in them is …’ This is the definitive verse outside Genesis concerning the time frame of creation. It states categorically that God created everything in six days. There is just no allowance for a gap.6

Romans 5:12 states, ‘… by one man (Adam) sin entered into the world, and death by sin …’ Adam was created on Day Six, but the classical gap theory says there was death during the gap before Day One. Not so, according to the Apostle Paul! This verse plainly says that death entered the world because of (and so after) Adam’s sin. There is nothing to restrict this verse to human death; on the contrary, Romans 8:20 says that the whole creation was made ‘subject to vanity’. Death could not therefore have been in the world (with fossils killed in the alleged ‘Lucifer’s flood’) before Adam sinned. Gappists must therefore say that Romans 5:12 and Genesis 3:3 refer only to spiritual death. This is not so. Adam began to die physically (Hebrew: ‘dying you will die’, that is, the process of dying would begin—Genesis 3:19, completed in Genesis 5:5), and he also died spiritually.7 Jesus experienced both physical death and spiritual death (Matthew 27:46) for us on the cross. See also 1 Corinthians 15:21–22.

What is the gap theory? 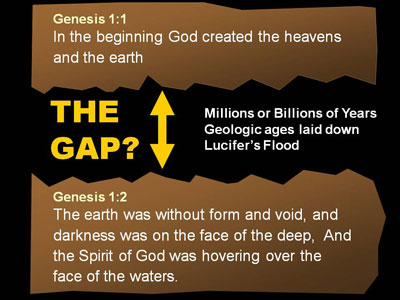 The Gap Theory puts millions of years between verse 1 and 2 in Genesis 1.

The gap theory is an attempt by some Christian theologians to make Genesis fit the popular belief that the universe is exceedingly old. Gappists believe in a literal Genesis, but accept an extremely long age (undefined) for the earth. To reconcile these views, they fit the geological ages between verses 1 and 2 of Genesis 1. However, they are opposed to evolution.

According to Weston W. Fields, author of the definitive anti-gap book Unformed and Unfilled, the traditional or classical gap theory can be summarized as follows: ‘In the far distant dateless past God created a perfect heaven and perfect earth. Satan was ruler of the earth which was peopled by a race of ‘men’ without any souls. Eventually, Satan, who dwelled in a garden of Eden composed of minerals (Ezekiel 28), rebelled by desiring to become like God (Isaiah 14). Because of Satan’s fall, sin entered the universe and brought on the earth God’s judgment in the form of a flood (indicated by the water of 1:2), and then a global Ice Age when the light and heat from the sun were somehow removed. All the plant, animal, and human fossils upon the earth today date from this ‘Lucifer’s flood’ and do not bear any genetic relationship with the plants, animals and fossils living upon the earth today …’ (Ref. 6, p. 7). Today’s creatures are a result of a 6-day recreation.

Note, however, that recently a new type of gap theory has surfaced in which there is no ruin or reconstruction; proponents just postulate a lengthy time gap only, with either ancient stars, an ancient earth, or both.

The alleged biblical evidence for a gap

Gappists’ arguments depend heavily on revisionist translations of a few Hebrew words.

Although the gap theory is well–meant by its propagators, it is not confirmed by any data, whether linguistic, Biblical, theological, or practical. To advocate death before Adam sinned is contrary to the Biblical statements that death came as a result of Adam’s sin, which occasioned the necessity for man’s redemption through Christ’s death on the cross and His resurrection.

Where do the angels fit in?

Exodus 20:11 says that God made all things in heaven and earth in six days. This must therefore have included the angels, all originally created good or holy (Colossians 1:16, Jude 6).

Job 38:4 & 7 suggests that the angels (‘sons of God’) were present when God laid the foundations of the earth, i.e. created it on Day One (Genesis 1:1), before He created light. Angels, being spirit beings, don’t have eyes with human retinas, and so presumably can see in the dark even as God can.

This raises the question as to when these beings rebelled to give rise to Satan and his demonic followers (2 Peter 2:4, Jude 6). This was surely not possible before God pronounced everything as being ‘very good’ near the end of Day Six (Genesis 1:31). Some gappists say that there was not enough time after Day Six and before the events of Genesis 3 to allow for this rebellion. So how long was it?

We do not know how long it was after Day Six (or Seven?) that the temptation of Eve occurred (Genesis 3). We can suppose that it must have been before Eve became able to conceive (Genesis 4:1), as Cain had a sinful nature, so must have been conceived after the Fall of his parents.

Let us therefore suppose that there was only a week between Day Six and the (human) Fall. Is this enough time? Consider:

• Angels inhabit a spiritual realm/dimension and we do not know how this interacts with our own space/mass/time continuum. Ever since Einstein, we know that time is not a constant and is affected, for example, by gravity, so time (if it exists as such) in the spiritual dimension is not necessarily the same as time in the dimensions we know.

• Even if the above did not apply, one week would seem to be more than enough time. Those who say, ‘It wouldn’t have been enough,’ and so opt for a gap before Genesis 1:2, are applying human standards of reasoning. However, surely angels, with super-human intelligence (but not omniscience), cannot be limited by such anthropomorphic restraints?

• Even if we use human beings as examples, why is not one day, or even one hour sufficient to assess a situation, and for pride to well up as a result? Why would it take a long time to incite others to join the rebellion? A few hours, or even a day or two, of rabble-rousing has often been sufficient to transform ordinary citizens into a lynch mob–cf. the Jerusalem crowd at the trial of Jesus. God’s subsequent expulsion of the angels who thus sinned from His presence could also easily have occurred within a very short time afterwards—maybe even minutes or less.

We conclude therefore that the time needed for the rebellion of the angels does not require there to be a ‘gap’ in Genesis 1 between verse 1 and 2, and such a notion conflicts with everything being described by God as ‘very good’ at the end of Day Six. 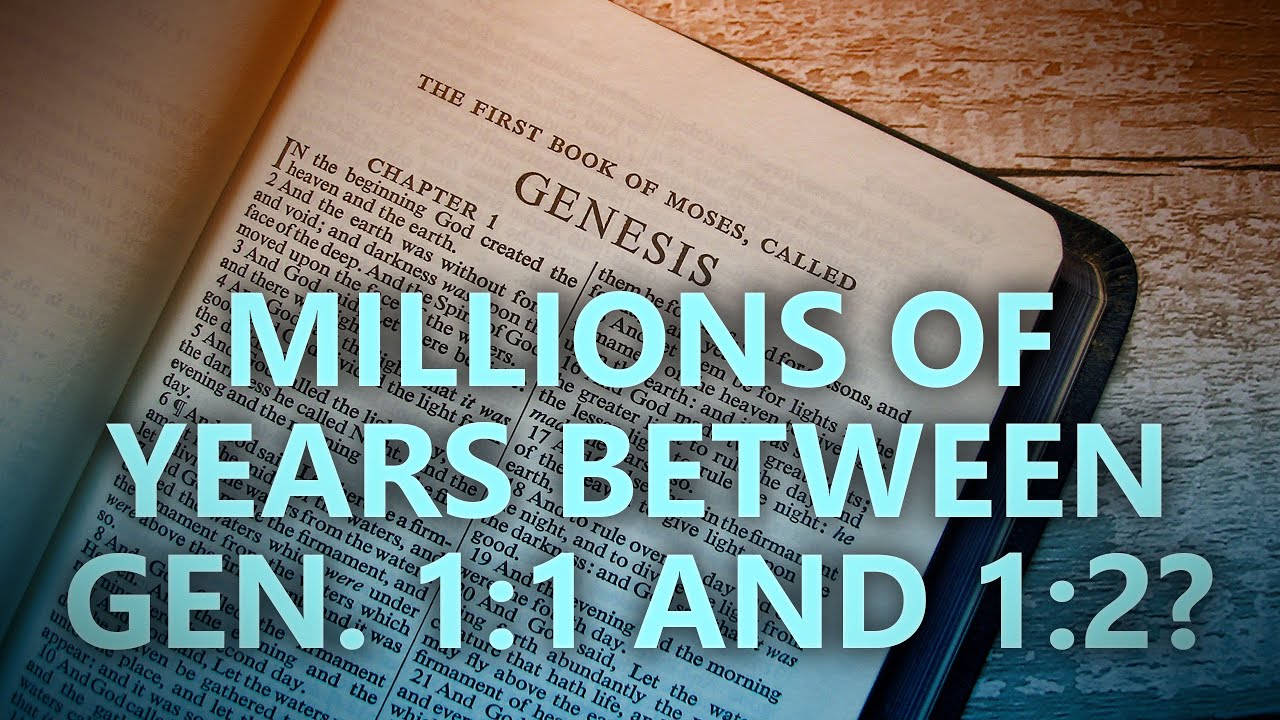 Hallmarks of Design, 2nd Edition
by Stuart Burgess
US $13.00
Soft Cover
Also Available in:
It appears you've already subscribed!
We've just sent you an email that will allow you to update your details.
Thanks for subscribing