A striking aspect of God’s creating is that He speaks things into existence. In Genesis Chapter 1, regarding how everything came to be, we read “God said …” eight times. The first time (Genesis 1:3), we read “And God said, ‘Let there be light,’ and there was light.” God spoke and it happened.

Only God can speak things into existence. The New Testament (NT) confirms this means of creating: “By faith we understand that the universe was created by the word of God, so that what is seen was not made out of things that are visible.” God spoke everything into existence from nothing. The secular big bang idea has everything coming from nothing, but with no sufficient cause for this to happen (nothing begets nothing!). See p. 24 of this issue.

Only God can speak things into existence.

Throughout Scripture we see the power of God’s Word emphasized. Indeed, this is the reason for the authority of the Bible; it is God’s Word—as it claims to be some 2,800 times.

The timeframe given in Genesis 1—six days—underlines the instantaneous nature of God creating things by His word on each day.

Furthermore, it is this immediate effect of God speaking in Genesis that shows us the divine nature of Jesus in the NT. When Jesus speaks, we see instant effects that are only possible because He is God the Son.

In the healing of the paralyzed man (Matthew 9; Mark 2), Jesus spoke, and the man walked straightaway—he did not need months of therapy!

The timeframe given in Genesis 1—six days—underlines the instantaneous nature of God creating things by His word on each day.

With the storm on the Sea of Galilee, Jesus spoke, and the storm stopped immediately. Not only did the wind stop, but the waves too. Anyone familiar with the sea knows that after strong winds the waves continue for some time; they do not stop immediately the wind stops. The disciples knew that they had witnessed something that only God could do. They said, “What sort of man is this that even the winds and sea obey him?” (Matthew 8:27). The sailors on Jonah’s ship also recognized the hand of God when the storm suddenly stopped (p. 48).

Saying that creation occurred over long ages of slow and gradual processes undoes these clear connections of Genesis 1 with the divinity of Christ. In contrast, the evidence for the biblical timeframe is getting stronger all the time—see some powerful examples in the interview with Dr Russell Humphreys (p. 44) and the article on chalk (p. 36).

We see also that creation thinking makes sense of things such as mass extinctions (p. 40) and nature conservation (the red panda, p. 55). And we see lots of evidence that God did create living things (pp. 12, 22), and ‘after their kind’ (see pp. 17, 28). Living things show that a super-intelligence created them (p. 14), and our remarkable sun also reveals the hand of God, including His power (p. 32).

Enjoy this feast of encouragement; and please share it with someone else! 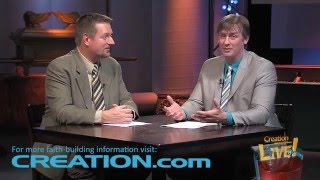 Genesis explains HOW God created, not why.

Evolution and the Christian Faith
by Philip Bell
US $20.00
Soft Cover
Who Made God?
US $5.00
MP4 Video
From Creation to Salvation
by Lita Cosner Sanders
US $14.00
Soft Cover