Let Beauty be the judge

“My mission”, said Helmut Hahn when we spoke, “is to bring people to the realization that there is a God, and that He is the miracle-working God of the Bible. I do this from the intricacies of nature. Like it says in Romans 1:20, God can be clearly seen in these things.”

To do this, Helmut uses his splendid collection of seashells. Born in Austria in 1923, he was once a lieutenant in Hitler’s navy, and has worked as a welder, high-school teacher, research technician and inventor of a pipe-welding system. He first began giving his shell presentations in schools nearly 30 years ago, some 10 years after he started collecting shells in earnest. Since then, Helmut’s presentations have developed to include churches, and also other community groups and institutions. “Sadly”, he said, “in the last few years, even the mention of creation in Canada’s schools is unwelcome.”

Helmut chose this article’s title because, he believes, “it’s important not just to talk about the skill of the Creator1—as a technical man, that fascinates me—but about the amazing beauty out there, too, His aesthetic sense.”

His collection in his home in Victoria, British Columbia (on Canada’s Vancouver Island) numbers some 2,000 shells from around the world. But when we made contact, it was clear one particular group of shells had caught his special attention. These are the very tiny Guamanian nerites (Genus Nerita, Family Neritidae), and they make up all the shells pictured in this article. He even mailed some to us in Australia. Thoughtfully, the parcel included a magnifying glass—because these miniature molluscs are only some 2–8 mm (c. 1/16–1/4″) across.

They may be small, but they have the most intricate designs of any shells I’ve come across

“They may be small, but they have the most intricate designs of any shells I’ve come across,” said Helmut. With his delightful accent, he said warmly, “I wondered why I wasn’t hearing yodels of joy from the Creation magazine staff on seeing these. But I thought, with all the marvellous things you folk see pictures of, perhaps you’ve been ‘overexposed’ to the beauty of God’s artistic hand.”

Brought up a Roman Catholic, Helmut said, “After Austria’s annexation by the Nazis, the political climate took hold of me. Then came 25 years void of any religious content. I started looking for answers to the meaning of life, settling eventually for Theosophy, a sort of western form of Hinduism. After having lost a lot of weight through fasting, I realized I had come to a dead end in my search for ‘enlightenment’.”

What followed was a spiritual crisis in which he came to see the deceptive nature of so-called “spiritual masters”. He said that in this experience, which led to his conversion to Christ, “I came to fully realize the power of Jesus over these demonic forces.” A few years later, he said, “I saw a few shells at a friend’s place and was fascinated by them. I concluded that they would be an ideal evangelistic tool, especially knowing how strongly the evolution theory has ingrained itself in the younger generation.” 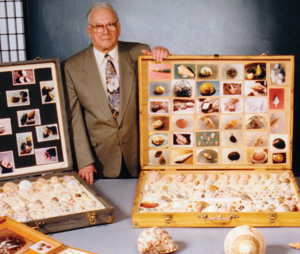 People in Helmut Hahn’s area often refer to him as “the shell man”. This is not only because of his 60–90 min. presentations to audiences (see main text). As he said, “I always carry a shell or two in my pocket so I can refer to them when I’m talking to someone new.”

He points out wistfully that it is a pity that in English, “Helmut Hahn, the Shell Man” does not have the rhythm or rhyme of its German equivalent (Helmut Hahn, der Muschelmann).

One man’s passion making a difference

Helmut has told his story and displayed his shells to thousands already. He said that the general reaction of onlookers is usually very positive, including total amazement at the intricacies of the designs, especially in the Guamanian nerites. Over the years, many have told him that they have become stronger in their faith from the presentations, and more aware of God’s greatness in creation.

He often points out how the natural world is full of wondrous beauty that defies evolutionary explanations. Evolution insists that everything has to have had some “survival (or reproductive) value”. But, he said, “Many things in the ocean have astonishingly beautiful patterns that they don’t use for any sort of mating display or camouflage. In fact, often they live where it’s so deep and dark that their stunning beauty is not even seen by anything.”

Helmut feels that it is as if God has built not just amazingly designed machinery into the natural world, but also displays of astonishing “added” beauty—much more than needed to survive or reproduce. He said, “This serves to give Him glory as we discover this beauty, even on tiny creatures. And by the Lord’s grace, I will continue spreading the news of His glory, and His wonderful Gospel, whenever the opportunity arises.”