Islam: Cult of apartheid in the West

Why do we tolerate apartheid in our society in Western nations today? This is exactly what is developing with the growth of Islam in our midst. In Australia, for example, the birth rate has fallen amongst Australian women since the introduction of the contraceptive pill in the 1960s. Though there was a slight increase1 between 2001 and 2005 it looks like it is now continuing to decrease.2 Also, the number of abortions performed in the country has reached unprecedented proportions. As of 2005, almost one in five Australian babies were killed by abortion—approximately 91,000 per year—according to federal government findings.3

In 2006 Dana Vale, an Australian member of parliament, warned the nation that in 50 years time it would be a Muslim state.4 The reason is that both abortion and contraception are either prohibited or not recommended in Islam5 and so many immigrant Muslim women are having many more children than the average non-Muslim.

According to Islam, Muslim men may take up to four wives. This has already happened and been recognized by the governments in the UK, and parts of Canada. Unbelievably, the authorities pay extra support to Muslim men legally married to additional wives in other countries.6,7 UK law currently prohibits the additional wives coming into the country via spousal visas, but there are other legal ways they may do so. Certainly this practice will facilitate an enormous impetus to Muslim population growth there. This seems like a way to circumvent Western laws prohibiting polygamy and allowing them to have more children legally.

The prevalence of polygamy among Muslims living in the West remains a matter of debate. Here is a sampling of what has been reported: As many as thirty thousand Muslim families in France include more than one wife. There are fifteen thousand in Italy and several thousand in Great Britain. Estimates for the United States typically run into the tens of thousands. Even Australia has been forced to crack down on Muslim men looking to meet potential second wives via the internet.8

In Sydney, Australia, it is not uncommon to see young Muslim girls in public whose apparent status as single mothers seems to deny the strict sexual morality of their faith, as reflected by the fact that their faces are appropriately covered up. The ‘open secret’ on the streets is that these are largely the second or subsequent wives of Muslim men who are legally married to their first one. These girls are able to claim full taxpayer support in bringing up the Muslim man’s additional children.

From most accounts in the UK and elsewhere in Europe, the Muslim population does not readily integrate with the host society. Hence we see the growth of isolated communities—the new apartheid developing. There is generally little intention of integration. In fact, a Muslim is actively discouraged from migrating to a non-Muslim nation unless he is going to spread Islam. The following indicates what Muslim jurists had to say:

Their judgment called upon Muslim immigrants in the West to place religious identity above national and ethnic identities and to promote the interests of a global Muslim nation. The jurists' consensus involved five points: First, a greater Islamic nation exists of which Muslims are members wherever they live. Second, while living in a non-Muslim society is undesirable, it might be legal on an individual basis if the immigrant acts as a model Muslim. Third, it is the duty of a Muslim in the West to reaffirm his religious identity and to distance himself from anything contrary to Islam. Hence, he should help establish and patronize mosques, Muslim schools, cultural centers, and shops. Fourth, Muslims in the West should champion the cause of the Muslim nation in the political as well as the religious sphere, for there should be no distinction between the two. Lastly, Muslims in the West should spread Islam in the declining, spiritual void of Western societies.9 [emphasis added]

through the acceptance in our culture of evolution, now taught as fact in Western universities, the authority of the Bible has been undermined, and abortion laws have changed

Dana Vale took her information from an imam at one mosque in Sydney who claims that within half a century Australia will be a Muslim state. She is quoted as saying, ‘I did not believe him, but if we look at the birth-rate ... We are dying out of our own accord: every year about 100,000 abortions are registered. If this number [keeps increasing at its present rate] over the next fifty years, then we will only have 5 million [non-Muslim] Australians,’ announced Vale.

So with declining non-Muslim birth rates throughout the Western world and massive abortion rates, the population balance is shifting from non-Muslim to Muslim. In several European countries, like Belgium and Norway for instance, the most common name for a newborn child is now Muhammad/Mohammed. In the UK the name is number two in popularity, but is likely to be number one in a year or two. This would have been inconceivable just a decade or two ago.

But abortion rates have only increased since the once-Christian West became highly accepting of the idea of evolution, and with it the notion that a fetus is not to be accorded the status of a human being. (After all, doesn’t it go through lower animal stages, and isn’t humanity just a relative thing?) And if it is human, well, there are varying evolutionary degrees of being human, and why should humans be special anyway?

The Bible prohibits murder of the innocent, and makes it plain, as affirmed by medical science, that life begins at conception. But through the acceptance in our culture of evolution, now taught as fact in Western universities, the authority of the Bible has been undermined, and abortion laws have changed. This has come as the West, spearheaded by massive compromise in the church on the basis of so-called ‘science’, has rejected its Judeo-Christian heritage. This respected the sanctity of human life on the basis that people were created in God’s image, as Genesis teaches. 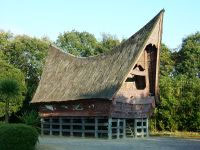 Not so long ago I was speaking with a Batak man who told me the story of what has been happening in his region of Indonesia. The Batak people have been staunchly Christian since the early 19th century.1 They were once fierce warriors and have previously resisted most attempts to convert them from Christianity to other religions.

However, only two decades ago, the teaching of evolution was introduced to the schools in Indonesia. The effect that this has had on the Batak people has been to dilute the conviction their young people have for the Word of God. This has gradually come about through the not-so-subtle message of evolution teaching them that the Bible is wrong. Consequently the young people have turned from the Bible, but the vacuum is now being filled by the Islamic missionaries to the area.

However, people are now often seen as even lower than animal life, and having children as ‘bad for the environment’. Barry Walters, an associate professor of obstetric medicine at the University of Western Australia,10 makes a case in the Medical Journal of Australia that having children is ‘environmentally unfriendly’. He is not alone in arguing that two children are enough; more than that and the parents should be charged a carbon tax. Walters goes on to argue that those purchasing condoms or undergoing sterilization procedures should be awarded carbon credits. Strangely enough, they argue this in spite of the declining birth rate.

Ironically, as the church has increasingly abandoned its biblical birthright, the resultant spiritual vacuum is being filled not by atheism and humanism, but by Islam.

If this trend continues our children could see the demise of the Western world as we know it.

Can this trend be changed? Yes, but only with a change of attitude on the part of Christian leaders in the West. There needs to be a renewed conviction that the Bible is indeed the Word of God, and is the truth. There needs to be a retaking of the intellectual, academic establishments, starting with our seminaries and Bible colleges, by Christians who understand the biblical world view, particularly how it connects with science. And ordinary lay Christians need to know how to defend the truth, starting with Genesis, and expose the empty, erroneous, strident and destructive philosophy of atheistic humanism, which masquerades as scientific.

In short, we need a new Reformation.