A compromised defence of Christianity

In spite of the cryptic title of the book, the subject of this review is a 238-page apologetic for the Christian faith. It targets an audience of unbelievers who have tough challenges, and new believers of the Christian faith who are looking for answers to such confronting questions.

Rebecca McLaughlin has a PhD in Renaissance Literature from Cambridge and a theology degree from Oak Hill College (London). She is a regular contributor to Tim Keller’s The Gospel Coalition. Together with Denis Alexander, Dennis Venema, and John Walton (among others) she is listed on the BioLogos Advisory Council. McLaughlin served for years as content editor for The Veritas Forum, which features such names as N.T. Wright, Steven Pinker, John Lennox, and many more. According to the bio on her webpage, she has “one husband, three kids, and enough close friends to sustain her … heart!”1

There is no surprise about which parts of the book involve disagreements, controversy even. It is those about the acceptance of evolution, big bang cosmogony, and the age of the earth.

“This chapter may be the most controversial yet”, McLaughlin quips in chapter nine, on homosexuality.2 There is certainly no controversy in the first few chapters, which cover an irreligious world, morality, and Christianity’s claim to being the only true faith. She has a good handle on distinguishing between some of the major religions when it comes to Jesus’ death (p. 54):

My favourite chapter (two) is about Christianity’s global diversity, as opposed to it merely being a western religion. Later chapters include such topics as science, women (discussed later), and slavery.

There is no surprise about which parts of the book involve disagreements, controversy even. It is those about the acceptance of evolution, big bang cosmogony, and the age of the earth.3 The good material in this book is unfortunately seriously marred by McLaughlin’s view on origins. For instance, she waxes lyrical about evolutionary altruism, ending that section with:

“Far from undermining the possibility of a loving Creator, the glimmerings of a moral instinct in our biological past fit well with belief in a God who wants us to love as he loves” (p. 73).

The biological past refers to the period of evolving morality. Yet, at the same time, she acknowledges that, “the fact that death, suffering, and accidental circumstances are baked into the evolutionary story, has been used by atheists to argue that humans are not in any meaningful sense ‘designed’ or intended by God” (p. 124). The atheists—in this sense—are quite right, but theistic evolutionists either cannot or, more likely, will not see it. As CMI has pointed out on numerous occasions, “death, suffering, and accidental circumstances” really doesn’t sound like “a loving Creator”. More on this shortly.

McLaughlin also errs on the topic of cosmogony:

“Far from being yet another pointer toward atheism, the big bang is intriguingly congruent with the core Christian belief that God created the universe out of nothing” (p. 116).

CMI has written many times on how the big bang is not compatible with biblical teaching.

McLaughlin really tries hard in Confronting Christianity to marry secular thinking with Scripture, but there is a price to pay.

McLaughlin really tries hard in Confronting Christianity to marry secular thinking with Scripture, but there is a price to pay. This is further evidenced by her dreadful claim that:

“the God of the Bible … spreads his story out over thousands, even millions, of years and weaves in all the mess of human history … at the center of history, he stakes the cross of his beloved Son” (p. 204, emphasis added).

The introduction of millions of years (as well as big bang and evolution) is really a massive blind spot (p. 187) in her belief. She quotes Richard Dawkins’ statement about the “pitiless indifference” of the universe in which we live, “combined with the impersonal forces that have forged our bodies through suffering, violence, and death” (p. 193). Yet, she cannot (will not?) see the sheer inconsistency of this evolutionary thinking with the Apostle Paul’s teaching about creation showing the attributes of God (Romans 1:20).

What’s more, she even contradicts herself by saying, quite rightly, “The beginning of the Bible paints a picture of Paradise: human beings in relationship with God and with each other, unstained by sin or suffering or death” (p. 205, emphasis added). If Adam and Eve descended from soulless hominids, which endorsing evolution entails, then they were not supernaturally created as the Bible teaches; their parents died, and theirs before them, stretching back into deep time.

The author believes that, “those who take a purely literal approach to Genesis 1–3 are still left with puzzles within the text” (p. 100). This follows immediately after she herself has tried to analyse Genesis 2:17, “but of the tree of the knowledge of good and evil you shall not eat, for in the day that you eat of it you shall surely die”. She offers three distinct interpretations (p. 100):

McLaughlin obviously believes that, unless regenerated by the Holy Spirit, people are spiritually dead—and that certainly stems from Adam and Eve’s disobedience to God’s command in Genesis 2:17. However, all people know that humans will die physically (as the Bible confirms in Hebrews 9:27); the exception being believers who are alive at Christ’s second coming (1 Thessalonians 4:16–17). Death for Adam and Eve was both spiritual and physical.4

McLaughlin’s use of anecdotes on numerous occasions gives a fresh take on familiar themes. One notable instance is a graduate friend who became a convert by listening to a lecture by humanist and bioethicist Peter Singer. In the chapter titled “Doesn’t religion hinder morality?” she aptly demonstrates what deplorable depths atheism leads to if followed through consistently—nihilism, the doctrine that nothing actually exists or that existence or values are meaningless.5 Fortunately, many (most?) atheists don’t follow the logical consequences of their worldview this far. McLaughlin also describes how one of her Cambridge colleagues, “discovered that the longing for justice that had drawn her to ‘radical, leftist ideologies’ was ultimately more satisfied by the radical message of Jesus” (p. 67).

A common objection raised to Christianity these days is the peculiar notion that it allegedly denigrates women (chapter 8). Quite the opposite is true: “the Bible’s words on women are the words of a man who lays down his life … for the billions of women who have trusted him with theirs” (p. 152). She hastens to point out that not all reports in the Bible—meaning the bad stuff—are a prescription, rather a diagnosis. “No one who uses the Bible’s teaching on marriage to justify chauvinism, abuse, or denigration of women has looked at Jesus” (p. 143, emphasis added).

When discussing women in the Gospels (p. 136ff)—particularly Luke—McLaughlin on more than one occasion points to the significance of their being elevated, when it is unwarranted from the text and where clearly there are other issues (including those of the heart) at play. For instance, a synagogue leader’s objection to Jesus healing a woman with a disabling spirit was that he healed her on the Sabbath, not because she was a woman (Luke 13:10–17). Another example is when Jesus commended the poor widow’s coppers over the larger gifts by others (Luke 21:1–4). Her being a woman was irrelevant to the status of her heart and the faith she exhibited by giving her all, not simply a surplus. 1 Samuel 16:7b comes to mind:

Women are equally as valuable to Jesus as men are, and likewise they are bearers of God’s image.

Similarly, children are endowed with that same divine image, even in the womb. During a silent pro-life rally in London, McLaughlin heard protesters shout, “Pro-life? That’s a lie! You don’t care if women die!” (p. 149). McLaughlin says she does care and writes:

“I think the ‘blame’ for abortion lies primarily not at the feet of women who make that choice in desperate circumstances but rather at the feet of all of us who are part of a society that separates sex from commitment, creates an ecosystem of unplanned pregnancy, and fails to support women who find themselves in that situation” (p. 150)

McLaughlin accepts that those choosing to live a promiscuous life are responsible for unwanted pregnancies, but she does challenge us to consider our behaviour in response to those who are hurting. Rather than ostracising someone who becomes pregnant out of wedlock, or someone who has gone through an abortion (which consigns them to the loneliness of isolation), she believes we should instead rally around them and provide assistance: “while the first Christians faced every kind of suffering, even being stoned to death, there was one struggle they did not face: loneliness” (p. 160). It is a point well made, and an eye-opener in other aspects of relationships too; these days, society seems to revolve more and more around (anti-)social media instead of true fellowship.

At the end of the book (p. 223) McLaughlin urges readers to come to Jesus. Although she has acknowledged sin throughout the book, strangely she does not mention it in this context. Earlier, she states that we should “put our trust in him” (p. 217). However, it’s unfortunate that McLaughlin fails to explain how a person comes to Christ. Trusting in Jesus must be accompanied by confession of sin, and a belief in his resurrection (Romans 10:9). After all, we trust Jesus when he calls “sinners to repentance” (Luke 5:32). Jesus informs us twice in the opening verses of Luke 13, that unless we repent, we will perish.

Disappointingly, the author of Confronting Christianity has confused ideas about the age of the Earth, big bang, and evolution. Some other unfortunate statements, not all mentioned in this review, mean this book falls significantly short of its potential. Its intriguing cover and title will definitely raise curiosity, and there certainly are people who could benefit from this book. But non-believers who confront Christians with questions about origins are more likely to be stumbled by McLaughlin’s compromised answers, than helped towards Christian faith. Despite the book’s shortcomings, even Christians may find some food for thought in its pages. 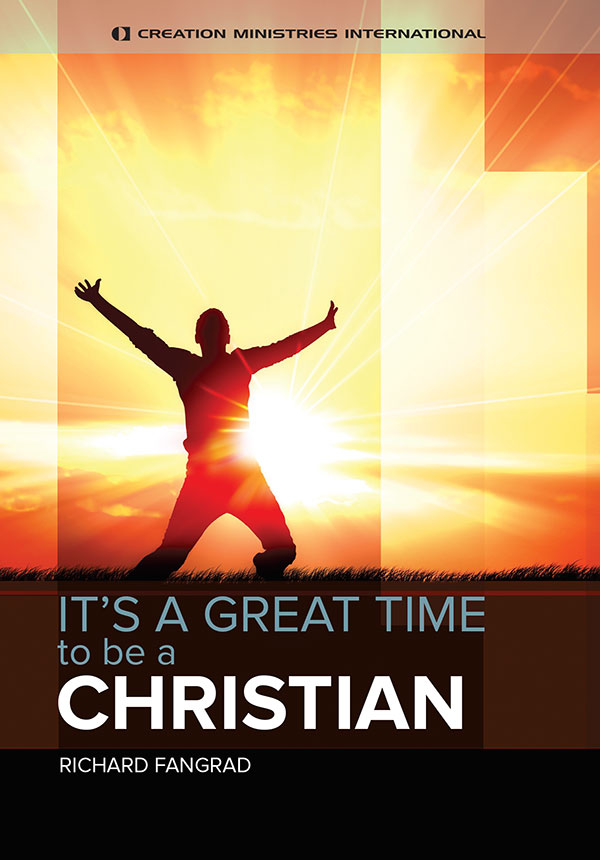