The conversation that never happened

A review of Richard Dawkins, C.S. Lewis and the Meaning of Life by Alister McGrath
SPCK Publishing, London 2019

What would happen if you pitted two Oxford dons against each other in dialogue and debate, one being a scientific populariser and celebrity atheist (Richard Dawkins) and the other a classical literary scholar and Christian apologist (C.S. Lewis)? What would the conversation look like, and what could we learn from such an interplay of ideas? Well, in this book, fellow Oxford scholar Alister McGrath seeks to answer these questions by imagining this exchange “of ideas that sadly never happened” (p. 1).

McGrath is well positioned to be our guide in this imaginary conversation; he holds three doctorates from Oxford University (molecular biology, systematic theology, and science/religion) and is currently the Andreas Idreos Professor of Science and Religion at the University. In addition, he has written extensively about Richard Dawkins, addressing the more scientific questions in Dawkins’ God: From the selfish gene to the god delusion (2015),1 and tackling the more philosophical issues in his bestselling response to Dawkins’ The God Delusion (co-authored with his wife, Joanna C. McGrath), The Dawkins Delusion: Atheist fundamentalism and the denial of the divine (2007). He is also a Lewis scholar, having written the recent biography, C.S. Lewis: A life: eccentric genius, reluctant prophet (2013).

… many of the big questions of life lie beyond the scope of Richard Dawkins’ universal Darwinism, and scientific investigation is not the sole arbiter in determining truth.

The format of the book is fairly straightforward and consistent throughout. It is structured around only four chapters, each engaging one of the big questions of life: 1) Big Pictures: why meaning matters, 2) Reasoned Belief: faith, proof and evidence, 3) Is there a God? and 4) Human Nature: who are we? Each consists of a brief overview of Dawkins’ beliefs on the topic, then a section on Lewis’s beliefs, before McGrath concludes with his own reflections.

Initially I was excited at the prospect of listening in to this imaginary conversation. Surely those interested in Christian apologetics will be well aware of the nature of some of Richard Dawkins’ anti-theistic tirades and will have wondered how he would fare against the man who wrote the book on Christian apologetics, Mere Christianity. Was a fascinating interplay of theology, philosophy, and science about to take place? My initial enthusiasm was tempered somewhat when the actual book arrived, a slender volume totalling only 80 pages, so clearly the book was really only meant to serve as an introduction to the topics, to “stimulate my readers to explore them further” (p. 2). However, nowhere is it recommended where to continue this exploration—presumably the publisher intends readers to move on to McGrath’s other books on these topics.

Knowing that neither Lewis (1898–1963), Dawkins, nor McGrath hold to a biblical view on creation, I wasn’t expecting too much in this area. In fact, the actual topic of creation was wholly absent from the book; even the chapter on humanity failed to address the issue. Given the author’s theistic evolutionary views, this is not surprising.

For a book written by a respected academic theologian, portraying a leading twentieth-century Christian apologist against one of today’s most famous atheists, one might be expecting to encounter some deep theological reasoning undergirded by Scripture, but within the entire volume only a couple of scriptural references are to be found.

Listening to the conversation

Nevertheless, the book does provide some insightful comments. There is much to agree with in the book’s overall critique of the materialist worldview and the universal Darwinism espoused by Dawkins. In chapter one, McGrath sketches out Dawkins’ worldview, saying, “Dawkins sees in Darwinism a framework that offers a superior explanation of our universe compared to its potential rivals” and that, to Dawkins, “Darwin provided the magnificently powerful alternative to design” (p. 5). McGrath correctly explains that a “scientific theory or a worldview” must be judged by how well it explains reality and makes sense of things:

“Yet Darwinism doesn’t—and can’t—explain everything” (p. 5).

Thus, many of the big questions of life lie beyond the scope of Richard Dawkins’ universal Darwinism, and scientific investigation is not the sole arbiter in determining truth. In contrast to this, McGrath, in the place of C.S. Lewis, recounts that his own conversion from atheism to Christian theism was precisely because he saw Christianity as having much more explanatory power in describing the reality that we live with. Lewis himself saw God “as both the rationality of the world, and the one who enables us to grasp that rationality” (p. 9). Lewis’ worldview, the rationality of accepting things on the basis of their explanatory power, is set out in one of his best-known, oft-quoted statements:

“I believe in Christianity as I believe that the Sun has risen, not only because I see it but because by it I see everything else” (p. 10).

Many readers would likely consider the conversation in chapter two, “Reasoned Belief”, to be vitally important. However, the overwhelmingly different styles of Lewis and Dawkins left the conversation a little shallow and the treatment too cursory for the reader to fully grasp what C.S. Lewis actually believed. McGrath outlines the way that “Lewis’s apologetic approach generally takes the form of identifying a common human observation … and then showing how it fits, naturally, plausibly, within a Christian way of looking at things” (p. 18). He shows how Lewis often invited people to view things in an alternative (albeit Christian) way and raises the objection that “surely we ought to ask what evidence might lead us to adopt those beliefs in the first place, rather than simply taking them as given” (p. 19).

The interaction with Dawkins on this point is more substantial. Dawkins is suspicious of religious beliefs precisely because he claims they involve a retreat from evidence-based reasoning. He sees religious faith as “blind trust, in the absence of evidence, even in the teeth of evidence” (p. 21). For him, people should look to science, for, “science is about what can be proved to be true on the basis of evidence” (p. 22). McGrath raises doubts about Dawkins’ scientism:

“Scientists regularly have to confront the problem of the ‘underdetermination’ of theory by evidence” (p. 22).

Simply stated, the evidence is often not conclusive enough to prefer one theory over another, as both can have some evidential support. The discussion at this point failed to highlight the role that worldview presuppositions play when people interpret evidence—the so-called ‘science’ of origins discussions is rarely a neutral endeavour, since the scientists themselves interpret things through their own particular worldviews.

In his reflections on the content of this chapter, McGrath successfully points out one of the glaring hypocrisies of Dawkins’ methodology, stating that he:

“ … sets out rational and evidential criteria by which he chastises religious beliefs. So why does he not apply those same criteria to his own belief? This remarkable rational asymmetry represents a significant vulnerability within the New Atheist movement as a whole” (p. 28).

McGrath: “I cannot help but feel that Dawkins really ought to read more Christian writers before making such muddled overstatements about something he doesn’t understand”

Dawkins says faith is a “process of non-thinking”; that it is “evil precisely because it requires no justification and brooks no argument” (p. 29) However, McGrath, having written entire volumes on Dawkins’ opinions, feels no need to repeat himself and quickly dismisses this nonsense—and in the process produces this great one-liner:

“I cannot help but feel that Dawkins really ought to read more Christian writers before making such muddled overstatements about something he doesn’t understand” (p. 29).

Is there a God?

This brief chapter, one would have thought, should have been the crux of what divides the two men in this imagined conversation. However, it seemed to be over almost as soon as it had begun. Dawkins is blunt, stating that “no good reason can be given for believing in God. It is irrational for a modern person to believe in God” (p. 32). Lewis, though, does not typically approach the question of God’s existence by providing evidential support, but by seeing it as getting someone to step into the story. Although he does present the moral argument particularly lucidly in Mere Christianity, it is a shame that McGrath doesn’t introduce that into the discussion here. McGrath says that “he does not establish the existence of God by evidence-based reasoning” (p. 37). These seemingly antithetical approaches meant that the two men seemed to be talking past each other and not to each other—perhaps a drawback of an imaginary dialogue of this sort.

Human nature: who are we?

An important corollary to the question posed by the final chapter is, ‘Where did we come from?’ Yet, unfortunately, nowhere is the creation of man in the image of God mentioned—nor is the concept of biological evolution really challenged. Instead, the focus is on Dawkins’ idea of the selfish gene, which depicts “human beings as accidental and unintended outcomes of a blind process, whose lives are influenced by genetic forces we do not fully understand” (p. 45). Dawkins argues that we are shaped and conditioned by our genes, and they may instruct us to be selfish—but that we are under no obligation to obey them: “the future of humanity depends on our resisting this genetic legacy, not going along with it” (p. 47). McGrath rightly points out, as others have done since The Selfish Gene was published, that this idea of mankind overcoming this genetic determinism seems to be “subverted by the arguments that precede it”; i.e. it is self-contradictory to suppose that we should use our ‘will’ or autonomy to overcome the evolutionary process that bound us in the first place.

The contribution of Lewis to this conversation is especially brief but he correctly says that:

“ … a purely materialistic account of human nature ends up reducing our deepest beliefs and aspirations to the outcomes of chemical or electrical events in the human cortex” (p. 49).

Lewis rejected the assertion that scientifically reductive accounts of human nature were sufficient in explaining who we are, while allowing that they might “help us understand aspects of human functionality” (p. 49).2 This, however, is as far as the interaction goes between C.S. Lewis and Richard Dawkins on this subject.

As McGrath states in his summation, “this short book can only begin to open up these questions”, and that is certainly all it does. The book may whet some readers’ appetites to delve deeper into the issues and questions raised. However, the imagined conversation between Lewis and Dawkins really amounts to nothing more than the briefest of introductions to their thoughts on some of the big questions of life. 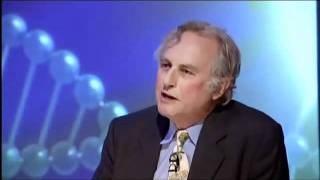