Several years ago we reported how evolutionists were debating the significance of two recently discovered fossil “snakes” with hind limbs.1 Then, in 2008, they got excited again by the discovery of legs in yet another fossil snake species.2 They have long been divided into two camps when it comes to snake origins: one group has argued for a terrestrial (land-based) lizard ancestor; the other group has been adamant that mosasaurs (extinct marine reptiles) gave rise to snakes.3

Trying to make something from the fossil evidence, the first camp proposed the following unlikely scenario: over millions of years, the bodies of burrowing lizards elongated and they lost their legs, only to have them re-evolve millions of years later, giving rise to these “leggy snakes”.

Many organs of lizards and snakes differ greatly

Proponents of the mosasaur idea were unimpressed with this hypothesis for the alleged relatedness of lizards and snakes—as well they might be! Many organs of lizards and snakes differ greatly, such as their eyes and optic centres of the brain. In any case, losing information is one thing, but evolving new information (for legs in this case) is quite another.4 As has been shown for stick insect wings, evolutionists usually assert that such evolutionary reversals do not happen.5 Certainly, the observable facts of genetics give no support for the many information-adding mutations that would be required.

Instead, advocates of the mosasaur idea think that the extinct mosasaurs are related to monitor lizards (e.g. Komodo dragon) and that these in turn share kinship with snakes—pointing to the snake-like shape and forked tongue of monitors. They claim that the discovery of several species of fossil sea snakes supports the idea that today’s snakes descended from the aquatic mosasaur. But, according to the other group, this hypothesis also has its problems, not least of which is the fact that sea snakes strongly resemble terrestrial snakes but lack features typical of mosasaurs or monitor lizards and their kin.6

From a biblical viewpoint, we can be sure that both ideas are wrong! God specially created snakes—they did not evolve from other kinds of creatures. That is not to say that snakes have remained unchanged since their creation. For one thing, all living snakes are carnivores but their ancestors were originally created to eat only plants (Genesis 1:30). Adam’s sinful rebellion and the subsequent curse on all Creation obviously had profound consequences for snakes and everything else (Genesis 3:14–19).

In recent years, evidence from molecular biology has been used to support the land-lizard-ancestor idea. Scientists compared the DNA of numerous species of lizards and snakes.7 Their results have shown that snake DNA is significantly different from the DNA of varanid lizards (monitors and goannas, all in the genus Varanus8) but is more like the DNA of other land-based lizards. They concluded that this is strong evidence for land-lizard ideas of snake origins.

Snake DNA is significantly different from the DNA of varanid lizards

What should we make of all this? Well it’s certainly true that the molecular evidence does fly in the face of the aquatic origin (from mosasaurs) story. Snakes and monitors are not closely related. So, since many evolutionists think that mosasaurs are ancestors of monitors and their kin, mosasaurs are logically ruled out as snake ancestors—and no other marine connection with snakes was suggested.9

But, this does not necessarily support the evolutionists’ other idea of snake origins (from lizards), contrary to their claims. All they have shown is that snakes have more DNA sequences in common with certain terrestrial lizards than others. It is no less scientific to attribute this “homology” (similarity in DNA design) to a common Designer—the Creator God of the Bible—than it is to claim that snakes and lizards share a common ancestor.

Indeed, common design features bring honour to their designer.10 And neither special creation nor evolution of new body designs can be observed in today’s world.

Evolutionists imagine a process of slow and gradual lengthening of the body of a lizard and a loss of limbs. Is there any evidence that snakes ever had legs? And if there is, would this be a problem for Bible-believing Christians? Well, no snake has forelimbs (even rudimentary ones), but some types of snake (e.g. wormsnakes, pipesnakes, boas and pythons) do have a small pelvic girdle and tiny hind limbs. However, the majority of today’s snakes (1,600 species of the colubrid family) lack a pelvis.11 So, while it is true that snakes are very distinct from lizards, it is possible that some snakes had legs to begin with. The curse which God pronounced on the serpent (Genesis 3:14) entailed that it would “crawl on [its] belly”, perhaps suggesting that this particular kind of snake possessed legs originally. It is certainly possible that God introduced a genetic change which led to the loss of legs in that animal’s progeny (but that’s a backwards step in evolutionary terms4). However, God probably created several snake kinds so it is quite probable—especially considering how specialized some of them are today—that some snakes were legless from the very beginning.

For instance, whereas we humans have 32 vertebrae, some snakes have over 400, allowing for a much more flexible backbone. Also, each of the vertebrae has additional projections that connect to adjacent ones to help stabilize the backbone as a whole. Whether moving over a solid surface or swimming in water, all snakes can move with side-to-side undulations of their bodies. In the case of land snakes, they move forward by pushing against irregularities on the ground. However, large boas, pythons and vipers may also use a sort of “caterpillar crawl” on open ground in order to creep up to their intended victim. Several species of snake use the “side-winding” method to get across loose sand. There are even snakes (of the colubrid family) which can flatten their bodies sufficiently to allow them to glide for considerable distances from tree to tree. So, the creation of several different kinds of snake seems likely in view of these very diverse locomotive behaviours. But, whatever the case, we can be sure that the snake kinds were represented on Noah’s Ark, 1,656 years later, and that much specialization among snakes has occurred in the thousands of years since that time, resulting in the 2,700 living “species”12 of snake recognized today.

According to evolutionists, the “earliest” definite fossil snake is “110 million years” old,12 but the fossil record shows that snakes have always been snakes. The fossil snakes with hind limbs mentioned earlier13 actually pose a real dilemma for evolutionists: their skull structure is like that of allegedly “advanced” snakes—such as boas and pythons—whereas the hind limbs are regarded as “primitive”! So whether we look at fossils or DNA, the facts don’t help evolutionary theories of snake origins at all but are fully consistent with the historical record in the book of Genesis. 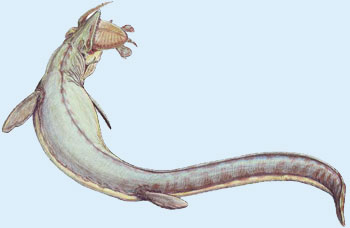 As far as we know, mosasaurs are now extinct. They were huge marine reptiles with long jaws and paddle-like limbs (like whale flippers), some of which had more than the usual 5 digits.1 It is thought that mosasaurs were formidable predators; the largest discovered, Hainosaurus, was 17 m (56 ft) long and weighed about 20 tonnes.2 Their long, slender bodies suggest that they swam with a snake-like motion—they were indeed “sea serpents” of a sort. The first mosasaur fossil was found in 1770, and the famous French anatomist, Georges Cuvier studied it in detail.3 Mosasaurs are one of many “sea-monsters”, past and present, that feature in the fascinating, well-illustrated book, Dragons of the Deep.4