Divinely designed denizens of the deep

The whale shark (Rhincodon typus), is a huge pelagic (open-sea) shark. It is not only the biggest shark, but also the biggest fish in the sea. (Some whales are bigger, but they are mammals, not fish.) DNA analysis shows that genetically distinct subpopulations of whale sharks live in the Atlantic and Indo-Pacific Oceans.1

Scientists were recently amazed to find that whale shark teeth (and ‘skin teeth’) are not just restricted to their mouths and skin. Unlike other sharks, even their eyes have them!

Its genus name Rhincodon comes from the Greek for ‘rasp-tooth’, due to the rough appearance of its teeth. Adults grow on average to 18 m (59 ft) long, and weigh over 12 tonnes. Specimens weighing up to 42 t and 21 m (70 ft) long have been reported, though not fully confirmed.2 (That’s about two large buses in length!)

Beautifully coloured, their backs and sides are marked with checkerboard patterns of spots and stripes. Each individual has its own unique pattern. This has led some researchers to suspect whale sharks can recognize each other.3 They are filter feeders, eating plankton (2–3 t/day), small crustaceans, squid, and medium-sized fish4 (< 30 cm, 1 ft). Whale sharks suck in vast amounts of water containing such organisms through their wide mouths (1.5 m, 5 ft). They then filter it through their enormous gills, using these to sieve their food as well as to extract oxygen from the water.

It is estimated that their mouths have several thousand tiny teeth. Marine biologists call these ‘vestigial’ since they do not play an obvious role in feeding.5 However, this likely represents a poorly understood design feature. (These are not the same as baleen plates in whales, which are important filters for the same kind of food.) These fish, clearly, are highly efficient feeders.

Whale sharks have several features designed to reduce water drag. One feature is the three prominent ridges running along the flanks. A second is the tough scales, called dermal denticles or placoid scales, which cover all sharks. ‘Denticle’ = ‘little tooth’, because they are structurally similar to teeth: a hard enamel-like outer layer, a middle dentine layer (bony tissue), and a pulpy inner core.6 The drag reduction helps the whale shark to swim 24–28 km (15–17 miles) daily, navigate 13,000 km/year (8,000 miles) and dive to depths of 1.9 km (1.2 miles).7

Scientists were recently amazed to find that whale shark teeth (and ‘skin teeth’) are not just restricted to their mouths and skin. Unlike other sharks, even their eyes have them!

Whale sharks don’t have eyelids, like other sharks do. With blunt, almost square heads viewed from above, their eyes at each corner are exposed, so are more vulnerable compared to other shark species. However, despite this, their eyes are well protected. Japanese scientists have discovered thousands of tiny teeth on the whale shark’s eye surfaces—called eye denticles (see figure 1).8

The researchers studied the whale shark’s fascinating eye structure and movements and made detailed 3D images. Using underwater ultrasound and special X-ray scans, they showed that the tiny eye denticles occur in rings around each iris: 2,900 denticles per eye! They identified four different, specialized shapes. From the top, they resemble oak tree leaves, but sideways on, their complex, tooth-like structure becomes apparent (see figure 2).

The research team describes this as a “novel mechanism of eye protection”. Inevitably, many scientists are unwilling to accept evidence for creative design. They call such protective design features as eyeteeth ‘adaptations’,6 and offer evolutionary just-so stories to explain their origin. Specifically, they claim that tumours called teratomas can explain how teeth can change their location of growth in an organism.9

These embryological tumours, from the Greek teras = ‘monster’, are serious, often malignant, abnormalities of the germ (sex) cells. They arise early in embryological development, and affect the way cells differentiate and specialize. This is why they contain different tissue types, which in humans can include teeth and hair.

Whale sharks are beautiful, complex, and marvellously designed for their environment. Everything about them testifies to their creation.

However, the teratoma ‘explanation’ doesn’t fit the observed facts. To accurately form eyeteeth around the iris obviously requires sophisticated genetic programming and machinery. To try to account for whale shark eyeteeth by way of ‘tumours’ is sheer evolutionary speculation, bordering on the bizarre. Tumours are bad: they are disorganized tissue by definition, something which occurred only after the Fall.

The ‘oldest’ whale shark dental teeth discovered—from Summerville, South Carolina, USA—are supposedly 23–33 million years old. Yet these fossil teeth were stated to be “identical to [those of] modern whale sharks”; there is “no appreciable morphological [shape] difference.”.10 So no evidence of evolution of whale sharks can be claimed, and certainly not from the only evidence available, their teeth.

These newly discovered eye denticles are (so far) unique to whale sharks, which may be relevant to whether these are a unique Genesis kind or part of a broader grouping that has diversified since creation.

To date, there is no fossil evidence for eyeteeth on any creature—but since that includes whale sharks, it may reflect the low chance of such evidence being preserved. Some fossil chondrichthyans (cartilaginous fishes, like sharks and rays) have eye armour. For example, Cladoselache (an extinct shark) had bony rings around its iris. They are known as ‘sclerotic rings’ because they are embedded in the sclera, the ‘white’ of the eye. These rings are found on the eyes of representatives of most vertebrate groups, including the ichthyosaur Ophthalmosaurus (figure 3)—except for living mammals and crocodilians. They help support their eyeballs.5 But they are very different structures from the whale shark’s unique eyeteeth.

Whale sharks are estimated to live for 80–130 years. However, it seems their population growth rate estimates have been skewed. Recent research on dead specimens determined they add a single growth layer to their vertebrae each year.11 Previously that was believed to happen twice a year. Their growth and population increase were found to be twice as slow as previously thought. So whale sharks were placed on the endangered list by the International Union for the Conservation of Nature.

It had been assumed that whale sharks had poor eyesight, and rather relied mostly on other senses (like smell) to locate their food. To test this assumption, researchers filmed whale shark eye movements. It was observed that whale sharks were able to closely watch divers who were swimming alongside them. The researchers also captured whale sharks’ uncanny ability to swivel their eyeballs and suck them into their sockets to protect them (to as deep as 50% of the eyeball’s diameter). Despite this, whale sharks are still able to see through a small gap in the eye socket connective tissue. The researchers admit this combined evidence “contradicts the general, though poorly established, notion of low reliance on vision in this species.”7 It clearly demonstrates clever design solutions, consistent with creation, rather than evolution.

Whale sharks are beautiful, complex, and marvellously designed for their environment. Everything about them testifies to their creation. Their unique features, including the newly discovered eye dentition, are consistent with the fact that these creatures didn’t evolve from non-sharks, but were created—for God’s glory. I feel very privileged to have seen them up-close, and to share my experiences of the biggest fish in the sea. 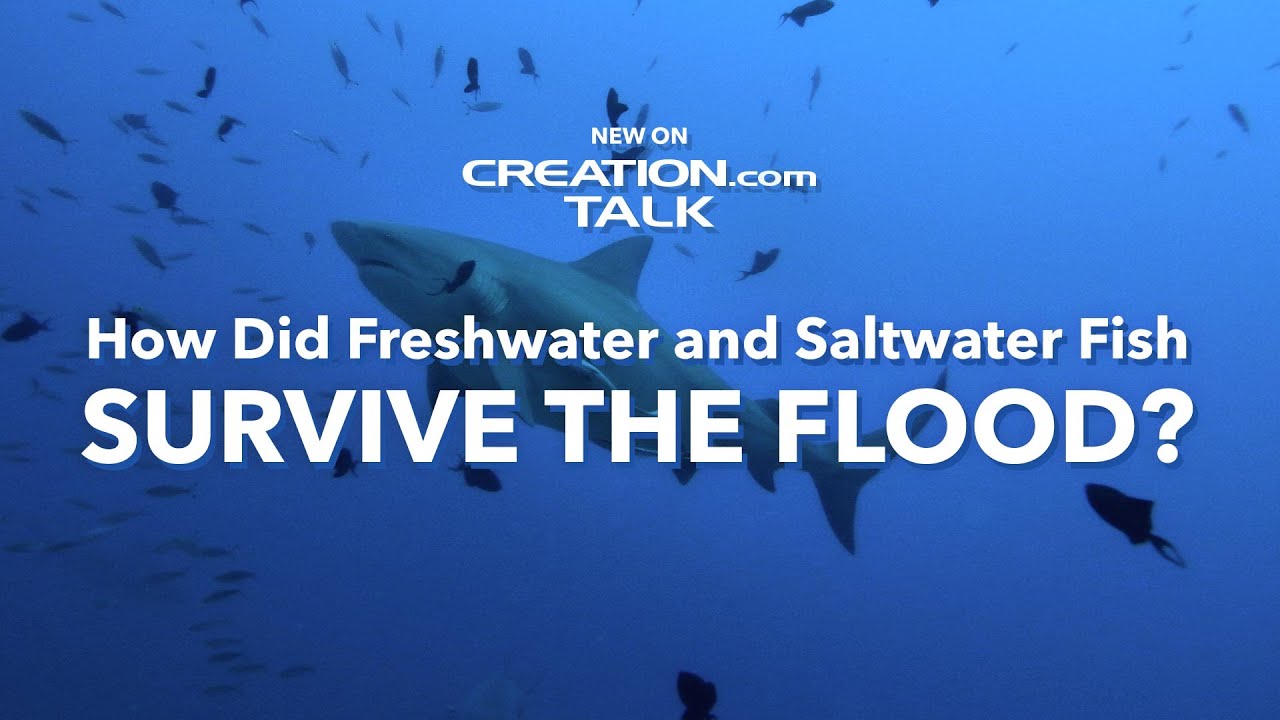 How Did Freshwater and Saltwater Fish Survive the Flood?