Christian apologists trip over the age of the earth … again1

How could a loving God … ? Identifying the problem

You cannot use the Fall as a response to why we have death and suffering if you also accept the evolutionary time scale, because they contradict each other.

Sooner or later, anyone involved in the subject of Christian apologetics will be asked about the existence of death and suffering. The question can take many forms: Why is there so much suffering in the world? Why does God allow it? What about suffering caused by natural evil? Historically, the Christian response to this question has been to explain that the original creation, which was declared by God to be “very good” (Genesis 1:31), did not contain such aberrations as death and suffering. Apologists then typically point to the historical event of the Fall as that which allowed sin and death to enter and corrupt the created order (Romans 8:20–22). Such a response is a biblical one, yet many are seemingly oblivious that this answer can only be used consistently within a ‘young-Earth’ framework. While correctly pointing to the Fall as an explanation for death and suffering, many apologists who accept the evolutionary long-age paradigm of earth history are unaware of the massive inconsistency. Old-Earth belief directly undercuts the biblical defence against objections posed by death and suffering. The secular paradigm is built upon ‘dating’ methods and assumptions which place death, suffering, disease, cancer and carnivorous activity long before the Fall of man. Thus, pointing to the Fall as the terminus a quo2 for death and suffering is logically inconsistent, and many thoughtful sceptics have picked up on this.

A recent example occurred on the Unbelievable podcast hosted by Justin Brierley. This is the UK’s leading apologetics podcast that brings believers and unbelievers together for discussion and debate. I listen to the show regularly and greatly enjoy the content. Recently, an episode aired which featured Christian philosopher Paul Copan.3 Paul is well known for his book Is God a Moral Monster? which attempts to explain many of the difficult passages in the Old Testament (see also this review of Copan’s book, co-authored with William Lane Craig, Creation out of nothing). As part of the show, listeners were invited to submit questions for him. The central part of the show featured what I considered an illuminating, yet frustrating, exchange between Paul and an atheist caller.

The age of the earth is pivotal

The caller was introduced by Justin Brierley as a person with a question about death and natural evil that seems to predate the Fall. He explained that his question was based on a video response that Justin made previously to the infamous viral video of Stephen Fry (discussed here), lamenting the God who would create bone cancer in children and worms that burrow into the eye.4 The caller first summarised Justin’s previous response;5 basically, these bad things are not how the world was intended to be, and the world is now out of kilter because of the Fall. So far so good—nothing to disagree with here. The caller then set his trap. He started by getting Paul Copan to confirm that he held to a 4.5 billion-year-old earth. Once Paul agreed that this was indeed his view, the caller proceeded with his main question:

“ … knowing the world as we see today, if extrapolating back millions of years, we have millions of years of death (as the engine of evolution), suffering, cancers, parasites and diseases. How is all that equated for if the Fall is responsible for it?”

The point which this caller had so astutely noticed, and was trying to get the host to acknowledge, was that you cannot use the Fall as a response to why we have death and suffering if you also accept the evolutionary time scale, because they contradict each other! If you want to accept the old-earth view then you must acknowledge the history that goes with it, i.e. millions of years of death, disease and bloodshed before the Fall. But once you accept that, you have no option but to say that God did in fact create these things and even pronounced them “very good” (Genesis 1:31).

However, most people can recognise that such an inconsistent answer has little apologetic strength and the next five minutes of discussion illustrated this. Paul responded by first referencing Scripture passages6 which he said hinted at the food chain being the way God has ordered the world. However, citing basically poetic references to the animal kingdom as seen by someone living long after the Fall did nothing to answer the caller’s question. So Paul continued, explaining that he wouldn’t call animal death a natural evil and that animal suffering is an incorrect category. Again, he was just evading the thrust of the question. Unsurprisingly, the caller interjected that, while Paul Copan might be happy to dismiss animal death as “natural”, to him it was actually horrific. Indeed, Richard Dawkins has remarked that, “The total amount of [animal] suffering per year is beyond all decent comprehension.”7 There are crippling and painful genetic diseases and mutations—things which Justin had implied were a result of the Fall. But how did they come about before the Fall, if Adam was really to blame?

Interestingly, the caller also commented that he had seen at conferences that Christians are honestly struggling with this issue. Paul’s response was that the world which was first created was not in fact perfect, his argument being that the phrase “very good” from Genesis does not imply perfection. This statement flies directly in the face of Hebrew lexicons which show that moral and physical perfection are conveyed by these words (see, Was God’s finished creation perfect?). The atheist caller would have been warranted in asking whether the phrase “very good” also included the presence of cancer! Paul continued:

“ … the primary focus is on humans who rebel and as a result the world is corrupted, spiritual death comes to human beings. The effects of the Fall are a spiritual issue rather than a physical one”.

However, the description of the effects of the Fall clearly includes physical elements: the serpent is cursed above all livestock, women will experience unpleasant pain in childbirth, the ground is cursed and will bring forth thorns and thistles, and growing food will be a laborious task (Genesis 3:14–19). Also, and most importantly, man was to die a physical death; ‘dust to dust’ (v.19). These unquestionably are physical changes. Paul then referenced the teaching in Romans 8, which talks about the creation being in “bondage to corruption” (Romans 8:21), in an attempt to say that this is something bigger than the Fall; it is about replacing the first creation. Yet again, he evaded the real issue, which is about when this bondage started; at the Fall or hundreds of millions of years before it?

The atheist caller, clearly getting a little frustrated that his question was not being answered, said, “You are kind of avoiding the issue by putting everything back to man. I am trying to home in on the stuff before. You are brushing it aside by saying the world is not good. Justin, you seemed to imply that the eye-eating worm is because the world is out of kilter due to the Fall, but Paul you are maybe implying, this is how it was made by God?” In other words, he was pointing out that Justin Brierley and Paul Copan could not both be correct.

In Paul’s final reply, he acknowledged that he believed there were instances before the Fall where parasites caused death and suffering, and that natural disasters were responsible for the deaths of many hominids—which, in his theistic-evolutionary worldview were not, of course, fully-evolved humans and did not have souls. He implied that, since neither parasites nor hominids were divine image-bearers, their suffering and death before the Fall of man could not be counted as true death or evil.

Rather than trying to invent different explanatory models or interpretations of Genesis that can accommodate millions of years, we need to realise that the Bible can and should be taken at face value.

Sadly, this view of history is imposed on Scripture and cannot be supported by any biblical references. Besides, admitting such a situation actually confirms the atheist’s point: ‘secular interpretations of earth-history’ and the biblical record are inconsistent. At the end of the exchange, Justin jumped in, almost second-guessing his original response, to say that he would have to check the exact wording on his video.3 He asserted that human choice is responsible for the world being the way it is, but that maybe bone cancer is part of a wider picture of the creation being in bondage to decay; that in some ways, it could be part of a bigger picture on a mystical level. I’ll admit, that along with the atheist caller, I do not really understand what this means!

This sorry episode clearly demonstrates that the age of the earth is not a secondary, peripheral issue, related only to the creation-evolution debate. It is absolutely pivotal in determining how we answer fundamental questions relating to death and suffering. If we are inconsistent, astute sceptics, like this caller, will pick up on it. It also demonstrates the irrational fear that so many Christian apologists have over the age issue, causing them to repeatedly make these types of contradictory statements. This fear seems to be driven by the incorrect assumption that deep time has been irrefutably demonstrated. However, such an assumption is unwarranted given the abundant evidence available today that the deep time paradigm is flawed.

The solution really is quite simple: rather than trying to invent different explanatory models or interpretations of Genesis that can accommodate millions of years, we need to realise that the Bible can and should be taken at face value. Its explanation for the origin of suffering and death needs no alteration and the problem only appears when secular evolutionary assumptions are imported into our theology (see Plumbing and paradigms). It is those compromising assumptions that need to be thrown out! Only then can we present the biblical explanation of death and suffering without contradictions. 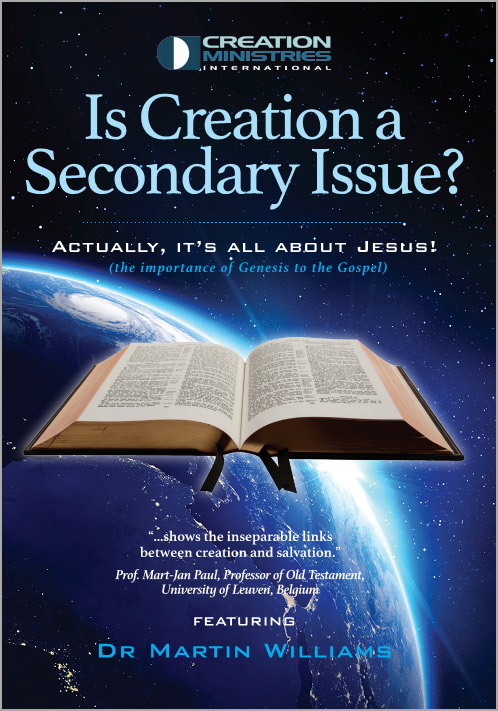