Today’s feedback is from Jose M., from the U.S., who asks whether archaeological evidence helps to confirm Scripture.

Let me start by saying that I love how this organization (creation ministries international) refutes skeptical arguments against the bible, creation, the book of Genesis etc. this organization has shown how God's word is true and not a fairy tale of some sort. one thing I would like to know is if archaeology has contradicted or disproven the bible in some sense as claimed by atheists/skeptics, many of them have gone as far as saying that king david, king Solomon, abraham, Moses even the creator JesusChrist, never even existed, or even that the tower of babel and the exodus never happened, I know they did because the bible doesn't lie and has always been proven to be true, my point is does such evidence exists (outside of the bible) in archaeology that supports the existence of these figures and these events mentioned in the bible?

I’m glad that CMI has been a help to you.

Many times in the past, the Bible has been vindicated by archaeology against skeptics.

Archaeology has often supported the Bible’s historical claims, and I’ll give some examples below. But we should not expect any historical science to confirm every person, place, or event mentioned in Scripture, because only a small fraction of the historical artifacts that once existed have survived to the present.

We have good reasons to believe the Bible is God’s Word, so we agree with you that whatever it affirms is completely truthful and without error. When there is a lack of archaeological evidence for some biblical claim or even an apparent conflict between archaeology and the Bible, this should not cause us to waver in our Christian convictions, because the overall picture is clear that the Bible is true. (See Faith and facts.) Often, the alleged problems are merely arguments from silence or the result of misinterpretations.

Many times in the past, the Bible has been vindicated by archaeology against skeptics. Critics once claimed that Assyrian king Sargon of Isaiah 20:1 never existed, only to have egg on their faces when his entire palace was unearthed. The Hittites were similarly dismissed by skeptics, but later their enormous capital city, Hattusa, was found, including buildings, artifacts, and writings. Also, you can read about the case of Babylonian king Belshazzar, which was thought to be a Bible error, as we covered in Creation magazine. Even the idea that domesticated camels were not available to Abraham has proved to be unfounded.

Thousands of archaeological discoveries could be mentioned that help to confirm biblical truth claims. For example, just consider the Judahite reformer, King Hezekiah. One can go to Jerusalem today and walk through the tunnel he built to bring water into the city, as recorded in 2 Kings 20:20. Multiple bullae (impressed clay pieces) containing his royal seal have been found. And his confrontation with Assyrian King Sennacherib (2 Kings 19) is confirmed by the Sennacherib Prism, in which this wicked king boasts of trapping Hezekiah in Jerusalem “like a bird in a cage”. Note that he did not capture Jerusalem, because an angel decimated his army.

While there isn’t as much evidence for someone like the earlier King David, there is still evidence that favors Scripture. Several ancient inscriptions mention the “house of David”, for example, which supports the Bible’s claim that he was the historical founder of the Judahite dynasty.

Many alleged conflicts are due to disagreements about chronology. For example, one school of thought dismisses Joshua’s victory over Jericho because it has assigned the destruction layer to the wrong time period. But once the dating is corrected, it’s clear that in Joshua’s day the walls of Jericho really did come a-tumblin’ down!

It’s less clear at present (to me, at least) how the Exodus squares with archaeology, but that doesn’t prove it never happened! The Egyptians would not have been prone to record such a defeat, and traces of an Israelite presence in Egypt or the wilderness might be hard to come by thousands of years later. Many have also argued that Egyptian chronology needs to be revised, which could potentially provide a better match between the Exodus and archaeological evidence. See the following articles about how the dates for Egypt might be amended:

Skepticism of the absurd

Those who deny the existence of Jesus belong to a whole different category of skeptic. That kind of outlandish hyper-skepticism would destroy all knowledge if it was applied consistently. Even a radical skeptic like Bart Ehrman doesn’t go that far; he has written a book arguing for a historical Jesus.

The mythicist idea that Jesus was invented by recycling legends of pagan gods relies on the worst kind of conspiratorial, unscholarly reasoning.

The New Testament is a collection of ancient documents that provide various streams of independent testimony to Jesus. So even if we set aside, just for the sake of the argument, our knowledge that the Bible is God-breathed, those books still provide compelling evidence that Jesus was a real person.

By contrast, the mythicist idea that Jesus was invented by recycling legends of pagan gods relies on the worst kind of conspiratorial, unscholarly reasoning. See Was Christianity plagiarized from pagan myths? and Copycat copout: Jesus was not made up from pagan myths.

Plus, archaeology lends indirect support by confirming many of the details in the Gospels. We have found an inscription that mentions Pilate as a Roman prefect, for instance. And we have found what appears to be the ossuary of Caiphas, the high priest who presided over Jesus’ crucifixion, and also the ossuary of James, the brother of Jesus.

I’ve only scratched the surface here. But if you want to learn more about archaeology and the things you brought up that I didn’t cover specifically, I recommend you read the articles on our Archaeology Q&A page or use our search engine, and pick up some books from our webstore, like Evidence for the Bible or Heritage of Evidence in the British Museum. 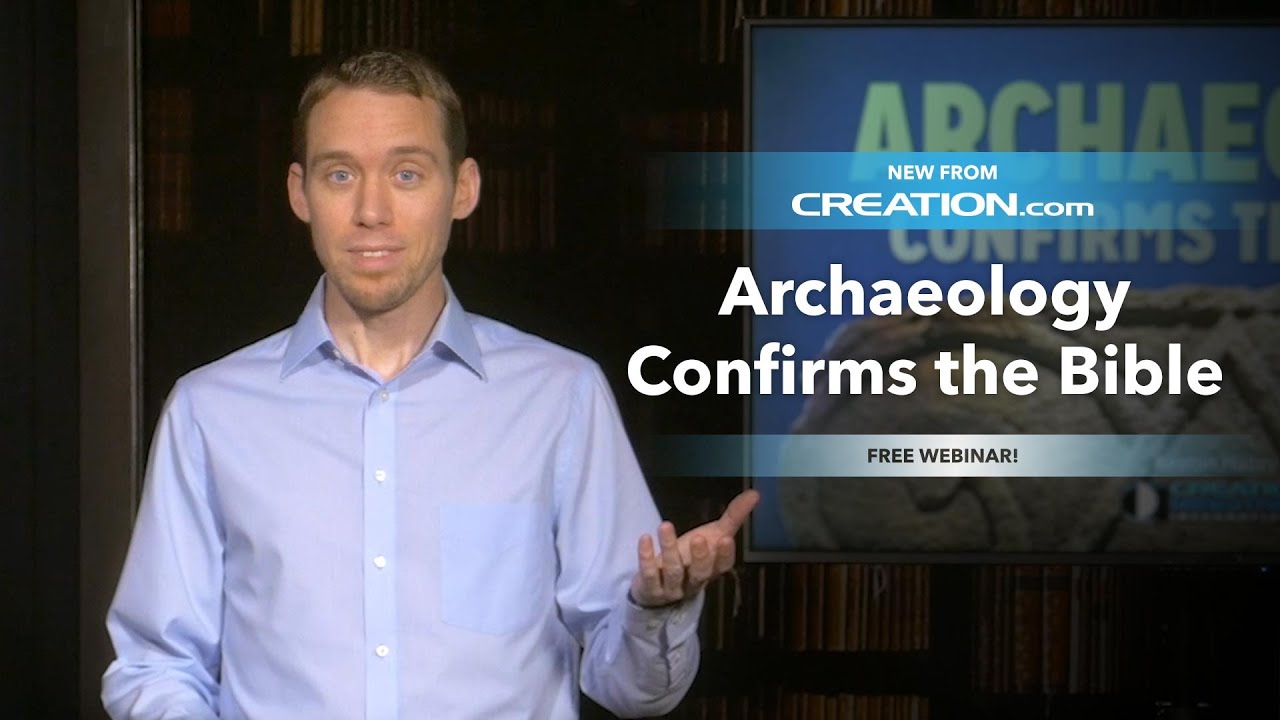 Patterns of Evidence: Exodus
US $17.00
DVD
How Did We Get Our Bible?
by Lita Cosner, Gary Bates
US $4.00
Soft Cover
The Genesis Account
by Jonathan Sarfati
US $30.00
Hard Cover
The Mystery of Ancient Man comic
US $2.50
Soft Cover