From T.B. of the UK, who is actually a fairly friendly atheist. His letter illustrates the way that many atheists try to shift the goalposts of the debate in their favour. Dr Jonathan Sarfati, Creation Ministries International, Queensland, Australia responded to show that Christians need not play by self-serving new rules made up by their opponents. Ellipses (…) at the end of T.B.’s paragraphs signal that a mid-sentence comment follows, not an omission.

I read with interest your article about atheism, …

Which article? There are many articles on our website, so it’s useful to specify the URL.

… in which you state it is self-refuting.

It is in many ways, which will be shown below.

In its basic form, atheism consists of the lack of belief in a God. This can hardly be deemed self refuting.

… atheism is just as much an assertion as theism. Therefore the burden of proof falls equally, and a fairer debate question would be ‘Does God exist?’

Actually, this is a revisionist definition of atheism. In fact, atheism is an active belief that God doesn’t exist. The article ‘atheism’ in Encyclopaedia Britannica 1:666, 1992, reflecting the usual definition in philosophy, begins:

‘Atheism, the critique or denial of metaphysical beliefs in God or spiritual beings. As such, it is the opposite of theism, which affirms the reality of the divine and seeks to demonstrate its existence. Atheism is to be distinguished from agnosticism, which leaves open the question of whether there is a god or not, professing to find the question unanswered or unanswerable; for the atheist, the nonexistence of God is a certainty.’

The entry on ‘atheism’ in the Routledge Encyclopedia of Philosophy, probably the preeminent reference tool for philosophy, begins:

‘Atheism is the position that affirms the nonexistence of God. It proposes positive belief rather than mere suspension of disbelief.’

Furthermore, it is simple enough to demonstrate that belief in God is absurd and irrational.

However, T.B. does not actually provide such a simple demonstration. From a logical point of view, how could God’s non-existence be proven? The atheist would need to have complete knowledge of all time and space, and all dimensions, to know for sure that God does not exist. However, an atheist with such properties would be virtually ‘divine’ himself.

Carl Sagan called himself an “agnostic”, because:

An atheist is someone who is certain that God does not exist, someone who has compelling evidence against the existence of God. I know of no such compelling evidence. Because God can be relegated to remote times and places and to ultimate causes, we would have to know a great deal more about the universe than we do now to be sure that no such God exists. To be certain of the existence of God and to be certain of the nonexistence of God seem to me to be the confident extremes in a subject so riddled with doubt and uncertainty as to inspire very little confidence indeed.

But this commonly overlooked point aside, as shown by the Encyclopaedia Britannica, atheism is just as much an assertion as theism. Therefore the burden of proof falls equally, and a fairer debate question would be ‘Does God exist?’ Also, atheists assert many affirmative statements without proof, eg. that the universe is either eternal or came into existence uncaused, non-living matter evolved into living cells by pure undirected chemistry, complex specified information arose without intelligence, design features arose without a designer, moral sensibilities arose out of amoral matter.

Since this [proof of God’s existence] is not possible, …

How would you know unless you’ve tried all possible proofs? Or can you prove that no proof is possible? What precisely would count as ‘proofs’? Perhaps you mean ‘valid arguments with true premises with the conclusion “God exists”’ [for information about logical terminology, see Loving God With All Your Mind: Logic and Creation]. We have presented such proofs on the website, and you have failed to refute these. Some of them are alluded to in the previous paragraph, for example:

This is explained further in the article If God created the universe, then who created God?

And we often point out that the design in living organisms is evidence of an intelligent designer. If this is not evidence, then it’s worth asking: what evidence would convince you that anything has been intelligently designed, whether by human design or by any other intelligence? After all, archaeologists have criteria for deciding whether an artifact has been made by design, and the SETI project is based on discovering a signal from outer space that would be evidence of a message sender. So what are these criteria?

Answer: complex specified information—see Refuting Evolution for an introduction, The Mystery of Life’s Origin, Philosophical Library Inc, 1984, for more technical detail, and for the most mathematically rigorous treatment, see Wm. Dembski’s book The Design Inference, Cambridge University Press, 1998. So this argument can be formulated:

Another interesting argument comes from the leading philosopher and Christian, Alvin Plantinga—he asked, what evidence does anyone have for the existence of other people’s minds? He argued cogently that the evidence for God is just as good as the evidence for other minds; and conversely, if there isn’t any evidence for God, then there is also no evidence that other minds exist—see God and Other Minds, Cornell University Press, repr. 1990.

… belief in God is irrational, …

This presupposes that it is irrational to believe anything without proof. However, according to the fundamentals of basic logic, all belief systems start with axioms, which by definition are accepted to be true without proof. This applies to atheism, science, mathematics, and propositional logic itself. And there are also many other propositions in everyday life that people believe without mathematically rigorous proof, e.g. that the sun will rise tomorrow, that a mother loves her child, etc. Therefore it is perfectly logical for Christians to use the propositions of Scripture as axioms. This is our bottom line—although the above arguments for God’s existence can be helpful, we believe that the Scriptures are their own authority. We do not ultimately try to prove the Bible with science, for that would place science in authority. See Faith and facts.

The difference between the Christian’s axioms and the atheist’s is that ours are self-consistent, make good sense of the evidence, and are consistent with the arguments proposed above. Conversely, the atheist’s axioms are ultimately self-refuting—perhaps the greatest form of irrationality is to believe in rationality when that rationality was supposedly ultimately produced by non-rational random combinations of chemicals. The great English writer and converted atheist, C.S. Lewis, pointed this out—see quote.

… particularly when no theist is capable of providing a coherent definition of what God is.

On a logical level, how could you know unless you know the capabilities of all theists? And on a practical level, T.B.’s assertion and general approach seems to be modelled on the British 19th century radical and atheist Charles Bradlaugh, who wrote in his A Plea for Atheism:

‘The atheist does not say “there is no God,” but he says: “I know not what you mean by God; I am without an idea of God. … I do not deny, because I cannot deny that of which I have no conception.”’

But despite what Bradlaugh and T.B. claim, most dictionaries that I’ve checked give a perfectly coherent definition consistent with what Christians mean, for example, ‘the supreme being who created the universe.’ Standard works on Christian apologetics and our Creation Answers Book, including some on our Q&A page also provide perfectly coherent definitions (look under Apologetics, God, and Philosophy). The Apostle Paul preached Him to the Athenian philosophers as:

‘The God who made the world and everything in it is the Lord of heaven and earth’ (Acts 17:24).

For you to prove a claim of incoherence, you must demonstrate a logical contradiction in the standard definitions, as opposed merely to asserting one.

In conclusion, there are two main worldviews that are diametrically opposed: atheism and Christian theism. Evolution and creation science are really different interpretations of the same data because of the different axioms (and therefore biases) of these rival worldviews. In reality, the leading evolutionary propagandists chide creationists not for believing in different facts, but for not following their self-serving rules, i.e. materialism—see The Rules of the Game. It is vitally important to realize that neither side is neutral, and that both sides interpret the data according to their underlying presuppositions. Similarly, Christians should not meekly play by rules made up by atheists for debating the question: ‘Does God Exist?’

Update: If atheism means a lack of belief in God, then rocks would be atheists. So this system has been called ‘rock atheism’. It also has a severe semantic problem. One could then say that theism could mean lack of belief in no God. But agnostics lack a belief in God, and also lack a belief in no God. Therefore agnostics would be both theists and atheists. Agnostic Steve McRae calls this semantic collapse. See the Venn diagram below. (Thanks to Steve McRae for these points; there is a more detailed analysis in McRae, S., Atheism, Theism and Agnosticism: Square of Opposition and Semantic Collapse (Short version), https://greatdebatecommunity.com/2021/04/15/atheism-theism-and-agnosticism-square-of-opposition-and-semantic-collapse-short-version, 15 Apr 2021.) 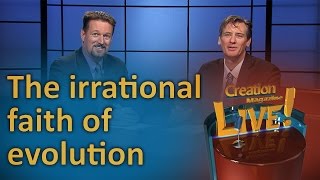