(and the timing of the Fall and Ark-building)

The history book of the universe

The Bible is a collection of 66 books of many types, including poetry, biography, romance, instruction and theology. And it was written over 1,500 years, by many types of authors: e.g. kings, generals, fishermen, prophets, scholars, a tax-collector and a doctor. But over-arching all this, the Bible is the true history of the universe,1 showing how God glorifies Himself all the way from Eternity Past to Eternity Future. And a central theme is Heilsgeschichte (German for ‘salvation history’): God’s eternal plan for His Son to take on human nature as the Last Adam (1 Corinthians 15:45). His death and resurrection would enable the salvation of those written in the Book of Life from the foundation of the world.2

In Romans 4, Paul teaches the vital truth of justification by faith alone precisely because ‘Abram believed the LORD, and he credited it to him as righteousness’—faith (Genesis 15:6), before he was circumcised—a work (Genesis 17).

So it’s not surprising that the Bible is full of historical information including timing. The great preacher Martyn Lloyd-Jones said:

“Our Christian faith is based entirely upon history … .It is quite unique because it is teaching which is based upon history … Our Christian faith is entirely different [to Buddhism, Hinduism, etc.]. It calls attention to facts. … the garden of Eden … Do you remember the history of the flood? That is fact. That is history. Then God gave a new start … . Tower of Babel … Abraham … the facts about our Lord … .”3

The Apostle Paul bases many doctrines on historical sequence. For example, in Romans 4, Paul teaches the vital truth of justification by faith alone precisely because “Abram believed the Lord, and he credited it to him as righteousness”—faith (Genesis 15:6), before he was circumcised—a work (Genesis 17). And in 1 Timothy 2:11–14, Paul teaches on the role of women by pointing out “For Adam was formed first, then Eve”—again, without the historical sequence, this would be meaningless.

And the author of Hebrews 7 teaches that Jesus’ priesthood, based on the Genesis figure of Melchizedek (Genesis 14), is superior to the Levitical Priesthood. And this is precisely because Abraham gave tribute to him long before its progenitor Levi was born.4

Under the Law of Christ, we may now eat the animals that were forbidden under Moses. At any of these times, it would have been immoral to eat anything God had forbidden. But when we realize that these are at different stages of God working out His program in history, the difficulties disappear.

Understanding biblical history also helps refute many skeptical attacks about different laws in the Bible. God told Adam and Eve to eat plants (except for the fruit of one tree); after the Flood He permitted Noah to eat any animal as well, but during the Mosaic Law, God forbade the eating of certain types of animals. Under the Law of Christ, we may now eat the animals that were forbidden under Moses. At any of these times, it would have been immoral to eat anything God had forbidden. But when we realize that these are at different stages of God working out His program in history, the difficulties disappear.

The Law of Moses was for a particular stage in this program, where God was separating out a special people, Israel, from whom the Messiah would come. And His Messianic people were to be separate from the surrounding idolatrous nations. Thus the laws repeatedly had ritual separation: no clothes made from a mixture of fabrics (Leviticus 19:19); no eating lobster, probably because the legs on a sea creature violated the ritual boundary between sea and land (Leviticus 11:9–12).5 And they were commanded to sacrifice animals to cover sin since they were anticipating Christ’s coming in the future.

But since the coming of Christ, the barrier between Jew and Gentile has been broken down (Ephesians 2:14). Now both Jews and Gentiles can become one in Christ Jesus (Galatians 3:28, Col. 3:11). Thus there is no longer any place for those separation laws, which are now rendered obsolete (Hebrews 8:13). And now it is immoral to sacrifice animals for sin, because that would deny the perfection of Christ’s work for us in history (Hebrews 10).

As an example of the great emphasis on history in the Bible, the doctor and great historian6 Luke records in great detail:

In the fifteenth year of the reign of Tiberius Caesar, Pontius Pilate being governor of Judea, and Herod being tetrarch of Galilee, and his brother Philip tetrarch of the region of Ituraea and Trachonitis, and Lysanias tetrarch of Abilene, during the high priesthood of Annas and Caiaphas, the word of God came to John the son of Zechariah in the wilderness. (Luke 3:1–2)

And in Genesis, we have the history of the creation of the world.7 In particular, in Genesis 5 and 11, we have a history of the human race from Adam, created on Day 6 of Creation Week, till Abraham, the father of the Jewish People or Israel—complete with the number of years between the birth of each name in the lineage.8 Normal usage doesn’t imply that the sons were born on the fathers’ birthdays, so months can be added to the time line at each generation. But this means that at most, 20 years could be added to the two timelines, which give Creation/Adam to Flood 1656 years, and Flood to Abraham’s birth, another 353 years. It is no wonder that Jewish and Christian scholars all calculated a very similar creation date, around 4000 BC.9

Furthermore, the Bible’s teaching is not confined to its explicit statements, but whatever can be deduced logically from them.10 With this, we can solve other timing questions from Genesis that many people ask—although the answer is not stated explicitly, it can be deduced from what is stated.

Timing of the Fall

When did the Fall happen? The Bible doesn’t say explicitly. But as will be shown, it does tell us something about that timing implicitly.

First, the Bible explicitly tells us that when God finished creation on Day 6, He called everything ‘very good’ (Gen. 1:31). So it logically follows that neither Satan nor Adam had fallen by then. This rules out all the varieties of scriptural gymnastics (e.g. gap theory, day-age, theistic evolution, framework hypothesis11) to compromise with millions-of-years ‘science’, since this would put death before Adam, contrary to 1 Corinthians 15, Romans 5 and Romans 8.

Similarly, God blessed the 7th Day (Genesis 2:3). There was no hint of any sin or curse on this day. Therefore, the Fall must have occurred after Creation Week.

There were probably a few days in paradise—Genesis 3:8 indicates that God was walking in the ‘cool of the day’, and the hithpael verb indicates a habitual or repeated action. It must have happened at least a few times before it could be a habit.

Therefore, their Fall must have occurred a very short time, from a few days to perhaps three to four weeks at most, after Creation Week. Corollary: we can also restrict the timing of Satan’s fall to the narrow window between the blessed 7th Day and the Fall of mankind.

But how long after? Not too long, as can be deduced from the revealed history of the first humans. Adam and Eve were commanded to “fill the Earth” (Genesis 1:28), and by definition, before they fell, they must have been obedient. Further, they were created “very good”, which implies physically perfect bodies, which means that would have been capable of conceiving immediately, at least within the first menstrual cycle. However, their first child (Cain) was conceived after the Fall, and was indisputably sinful.

Therefore, their Fall must have occurred a very short time, perhaps three to four weeks at most, after Creation Week.

Corollary: we can also restrict the timing of Satan’s fall to the narrow window between the blessed 7th Day and the Fall of mankind.

How long did Noah have to build the Ark?

God instructed Noah to build a huge ship to ride out the Flood. One thing in Noah’s favour was the much longer lifespans. But how long did he actually have?

Some have taken 120 years in Genesis 6:3 as the answer. Indeed, this can’t be referring to human lifespans, because many people after the Flood lived way beyond 120. So it seems to be the time mankind as a whole had before the Flood wiped out all but the Ark crew. But this doesn’t answer the question: the starting point of this 120 years was not the Ark building, but when “sons of God” were mating with the daughters of men in Genesis 6:4.12 So what is the right timeline?

First, when God gave Noah instructions to build the Ark, it was to hold Noah’s three sons and their wives (Gen. 6:14–18). This implies that Noah not only had sons by then, but also that they were all old enough to have married.

Nothing in the Bible makes sense except in the light of history.

Thus if we allow 30 years for them to become old enough to marry, this would mean Noah had about 70 years to build the Ark in time to survive the Flood.

While it doesn’t affect the conclusion too much, it’s worth looking deeper at Genesis 5:32. Now, before we can make logical deductions from a biblical statement, we must understand what it’s saying, and we can often do this by interpreting Scripture with Scripture. When we do so, we can deduce that it is not saying that these three were triplets born when Noah was 500. This follows from the fact that Shem had Arphaxad 2 years after the Flood, when he was 100 (Gen. 11:10). Therefore Shem was only 98 when the Flood came, so he was born when Noah was 502. Ham is stated to be the youngest (Gen. 9:24), so Japheth must have been the eldest. Therefore Genesis 5:32 is telling us how old Noah was when Japheth alone was born.

Furthermore, we have the same structure in Genesis 11:26: “After Terah had lived 70 years, he became the father of Abram (later Abraham), Nahor and Haran.” However, Genesis 11:32 tells us that Terah’s lifespan was 205 years, and Genesis 12:4, describing what happened after Terah died, tells us that Abram left the land of Haran for the Land of Israel, and he was 75. Thus Terah must have been 130 when Abram was born.

Whole books can be written about the importance of biblical history, starting in Genesis. But even the sketch in this article should show that it’s not much exaggeration to say, “Nothing in the Bible makes sense except in the light of history.”13 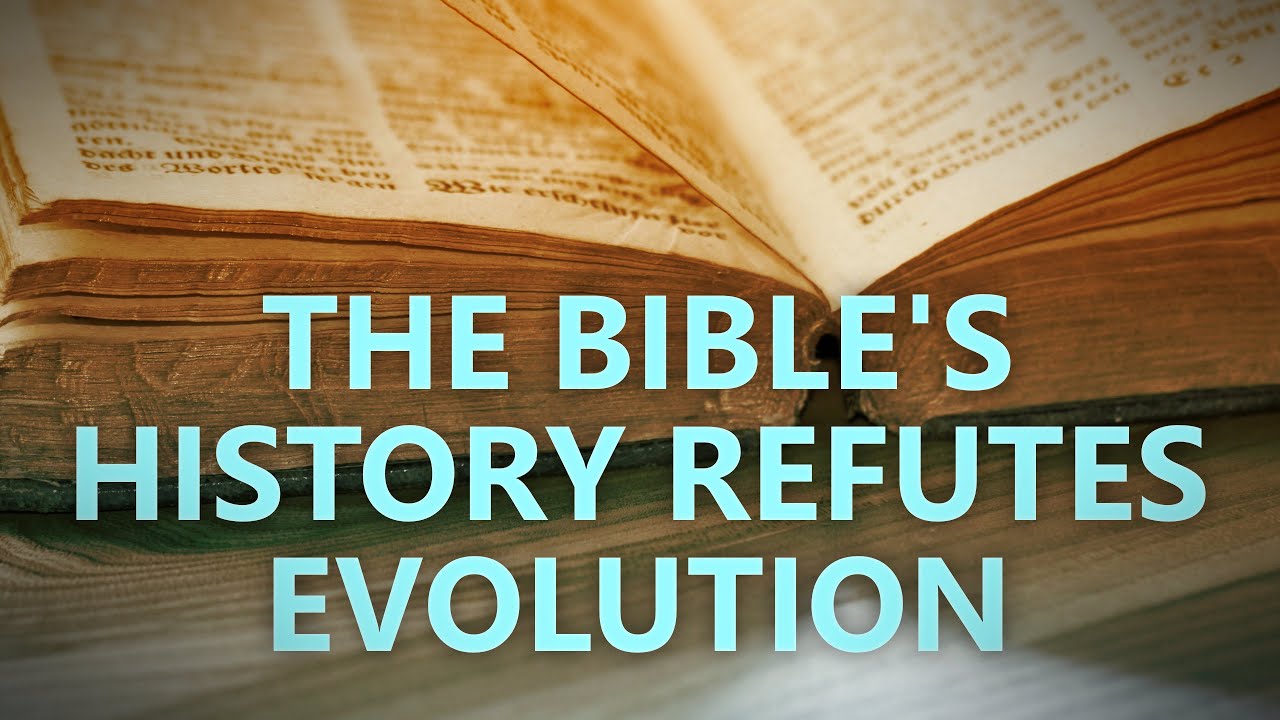 The Bible’s historical accounts are important, and refute evolution