An online news site reported: “Scientists looking for invisible dark matter can’t find any.”1 The so-called Large Underground Xenon Experiment was located in a hole a mile (1½ km) underground in an old gold mine. It involved a detector consisting of about 1/3 tonne of super-cooled liquid xenon in a tank festooned with light sensors, each capable of detecting a single photon.

It is fervently believed the elusive stuff must exist, despite not a shred of experimental evidence for dark matter’s existence.

But alas, no dark matter particles were detected. In fact, for at least 40 years now no experiment looking for these has found anything.

So what next for dark matter enthusiasts, i.e. most big-bang believers? The plan is to build a bigger detector, only this time costing $50 million and 70 times more sensitive. Such is the mindset! It is fervently believed the elusive stuff must exist, despite not a shred of experimental evidence for dark matter’s existence.

The only basis for this faith in the existence of dark matter is from cosmological considerations.2,3,4

The state now reached in cosmology could be called a ‘dark matter crisis’.

In fact, the very survival of the big bang paradigm is at stake here, which strongly drives the relentless search for dark matter. That’s because when observational data for the alleged expansion of the universe is compared to standard big bang theory, dark matter is needed as a ‘fudge’.5 Without most of the universe being composed of invisible, unknown dark matter and dark energy, the big bang model collapses. The state now reached in cosmology could be called a ‘dark matter crisis’.

But I suggest the big bang itself is a failed paradigm, and every failed experiment just digs the hole deeper—pun intended.

The reason is ultimately because the paradigm itself is based on a false foundation: that is, that the universe is the product of only matter and natural law, and that it has evolved to its current state over 13.8 billion years, which is not the case.

Though there may still be yet-undiscovered particles, dark matter—supposedly comprising 80% of all the matter in the Galaxy, yet invisible—sounds more and more like a tall story than real physics. 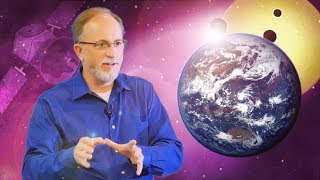 Flat Earth? The Bible And Science Say No!

Dismantling the Big Bang
by Alex Williams, John Hartnett
US $17.00
Soft Cover
Challenges to the Big Bang
US $12.00
DVD
Astronomy Vol 3: Our Created Universe
US $19.00
DVD