How big were the dinosaurs, really?

Dinosaurs were the biggest land animals to walk the earth, but they are extinct today.1 Only marine creatures such as the blue whale exceed their size.

How big was the average dinosaur?

Although the huge dinosaurs tend to be the best known in popular culture, there were also small dinosaurs, some the size of a rooster.

A 1995 analysis concluded that the most common size (‘mode’) was about 1–10 tonnes (t).2 By comparison, today’s white rhinoceros and African elephant weigh about 2 and 6 t, respectively.

The median mass of a dinosaur is determined to be 630 kg (1,400 lb), or the size of an American bison, based on the largest published and most accurate data set to date.—Tim Clarey and Jeff Tomkins

The scientist who conducted this analysis noted that the early researchers tended to collect more of the larger dinosaurs, while modern researchers have found a greater proportion of smaller dinosaurs. A further analysis in 2015 confirmed and refined that earlier research:

What was the biggest dinosaur type?

As a group, sauropods, with their long necks and tails, were almost certainly the largest dinosaurs by a big margin. However, deciding on the largest sauropod can be difficult because most are known only from very few remains.

During the so-called American ‘Bone Wars’, Edward Drinker Cope (1840– 1897) described a dinosaur named Amphicoelias fragillimus, thought to be a diplodocid, a type of sauropod. One paleontologist estimated this to have been “58 m [190 feet] long, about 9.25 m [30'] at the highest point of the back, and with a body mass of 122,400 kg [135 tons],”4 making it far larger than any other known dinosaur.

But what was the evidence? A single broken vertebra! This was reported as 2.7 m (9') long, but even this has been lost—only photographs and records of measurements remain, and its size has been doubted. And the size estimate of Amphicoelias likely exceeds the physical limitations on the mass of land animals.5

Various other candidates for the largest sauropod have been claimed, e.g. Bruhathkayosaurus, Argentinosaurus, Turiasaurus, Puertosaurus, Pellegrinasaurus, Ruyangosaurus, Patagotitan, and more. But in each case, the sizes were based on extrapolations from only minor parts of the skeleton.

Longest and heaviest from reliable evidence?

What is the largest, based on good remains? When it comes to almost complete skeletons, the longest might well be Diplodocus carnegii, 25 m (~80') and 10–16 t;6 and the most massive dinosaur was probably Giraffatitan brancai (formerly Brachiosaurus brancai), 23 m (75') and 40 t.6

The most massive dinosaur known from a large but hardly complete skeleton is probably Futalognkosaurus dukei found in western Argentina, about 30 m (100 ft) long and over 50 t.7 The bones of its hip, ribs, and vertebrae of its back and neck are known, but not the head, legs, or tail. In all, only about 15% has been recovered (and about 27% of the types of bones).

The most massive dinosaur known from a large but hardly complete skeleton is probably Futalognkosaurus dukei found in western Argentina, about 30 m (100 ft) long and over 50 t.

Another huge dinosaur with most of the skeleton discovered, also in Argentina, is Dreadnoughtus schrani.7More than 45% of its bones were found, and 70% of the types of bone. Most of the tail, hip, shoulder, and leg bones, and some back vertebrae, have been found, but only one from the neck; and the skull is missing. Its discoverer, Associate Professor Ken Lacovara, describes Dreadnoughtus this way:

… everything about this dinosaur is giant, the femur [the longest, thickest leg bone] is 6 feet tall … the tailbones are gargantuan with huge muscle scars that show us it essentially had a weaponized tail that was 30 feet long … this incredibly large and muscled individual that would have feared nothing in its landscape … this is an incredibly bulky, massively muscled tail, everything about this speaks to its power … a dinosaur in this mass range, 65 tons, is really pushing the limit of what is physiologically possible … .8

So, would this be a candidate for the biggest dinosaur known from a majority of its skeleton? Later estimates based on more realistic body densities and tissue volume9 have drastically downgraded its size to about 25 t.7 However, Lacovara still maintains that his estimate is more likely.10

Dinosaurs were clearly a group of very big animals on average. When it comes to the biggest of all, we know for sure that Diplodocus carnegii was an extremely long dinosaur, and Giraffatitan brancai was an extremely massive one. There is a good possibility that some others were bigger, but the fossil evidence is insufficient, so we can’t be sure.

How could Noah fit such huge animals on the Ark?

Because the biggest dinosaurs were so massive, biblioskeptics have attacked the account of Noah’s Ark claiming they could not have fit on the Ark, or even through its door. There are several points in answer to this, as we have documented previously, all with ample references to research papers:

There is no reason for God to have sent Noah (Genesis 6:20) the largest full-grown specimens. Dinosaurs hatched from eggs, and even the biggest egg, classified as Macroelongatoolithus from the dinosaur Beibeilong sinensis, was only 61 cm (2 ft) long and elongated.1And from growth rings on the bones of many dinosaurs, scientists have argued that they went through a big growth spurt. So the dinosaurs could all have boarded at an age a year before their growth spurt. E.g. Apatosaurus could have been on board as a four-year-old 1-t specimen rather than as a 25-t adult. A year later, it disembarked and began its growth spurt.2

Although there are many different dinosaur genera and species named, there were probably far fewer created kinds. E.g. Apatosaurus probably wasn’t on board per se, but was represented by a pair of the Diplodocid created kind that includes Apatosaurus. Furthermore, many named dinosaurs—probably as many as a third of them—turn out to be immature versions of other named dinosaurs.3 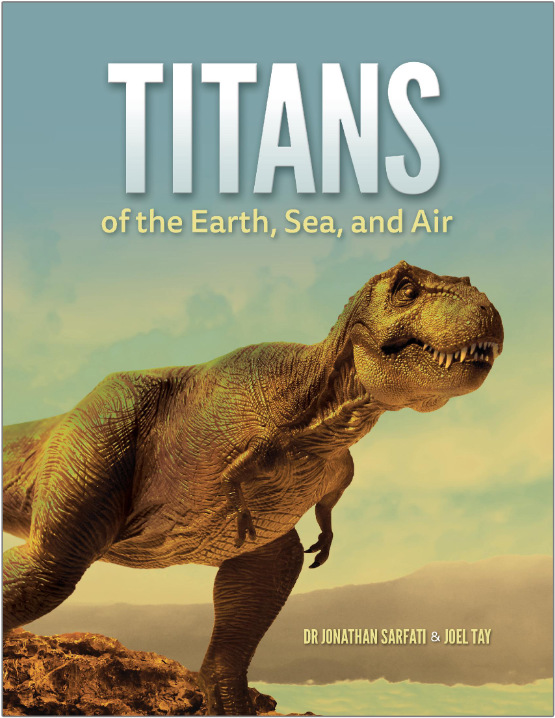 Titans of the Earth, Sea, and Air
by Dr Jonathan Sarfati, Joel Tay
US $39.00
Hard Cover